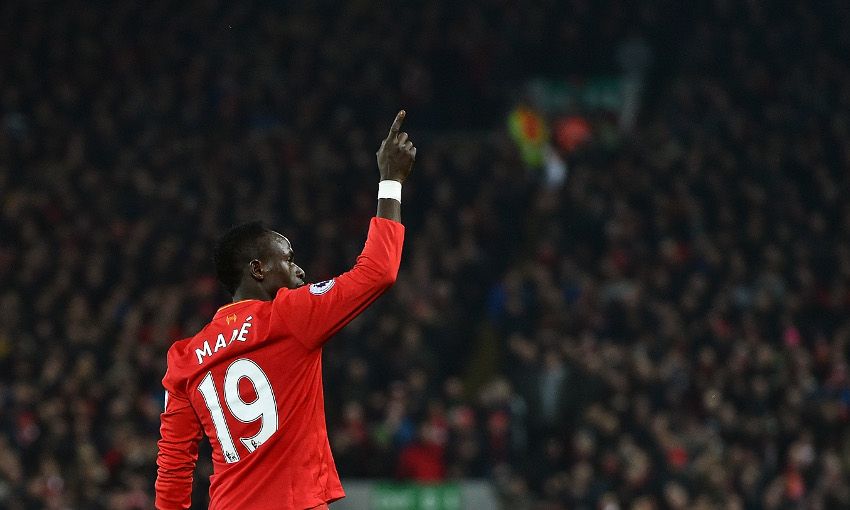 Liverpool turned on the style to record their first Premier League victory of 2017 with a comprehensive 2-0 win over Tottenham Hotspur at Anfield on Saturday evening.

An explosive first-half performance saw the Reds fly into a two-goal lead thanks to a quick-fire double from Sadio Mane.

The forward first converted after being sent clean through on goal by Georginio Wijnaldum’s through ball after 16 minutes.

He grabbed a second almost immediately when he crashed home from close range after Hugo Lloris had initially repelled efforts from Adam Lallana and Roberto Firmino.

Liverpool had further opportunities to add to their tally as they moved back into the Premier League’s top four on goal difference.

Liverpool made one change to their line-up for the visit of Tottenham, with Wijnaldum replacing Emre Can in midfield.

Lucas Leiva continued in defence, with Dejan Lovren still absent due to a knee injury and Ragnar Klavan deemed only fit enough for the bench.

Eager to put recent frustrations behind them, Liverpool began strongly at Anfield with a lively, tenacious opening under the floodlights.

After forcing a series of early corners, the Reds fashioned the game’s first real opening on the 13-minute mark when a pacey counter-attack resulted in Philippe Coutinho crashing a shot against Toby Alderweireld from 12 yards out.

But their assertive approach was rewarded soon after when they opened the scoring via Mane.

Lallana regained possession on halfway from an unaware Victor Wanyama and laid it off for Wijnaldum. The midfielder in turn slid a pass through for Mane to latch onto, allowing him to bare down on Lloris before lifting an effort over the goalkeeper and into the roof of the net.

And it was to get even better for the hosts just two minutes later when Mane again found the target.

This time, the Senegal winger took advantage of Eric Dier’s indecision to win the ball and speed into the area, where he squared for Lallana. Lloris repelled his effort and Firmino’s subsequent follow-up, but Mane was on hand to lash into the net from close range.

Liverpool weren’t about to ease up on the accelerator, either, and Mane could have sealed a hat-trick when he out-sped Ben Davies to a wayward ball from Kyle Walker and struck into the side-netting via a slight deflection.

Then, only a fine save from Lloris prevented the No.19 from finding the top corner as he arrowed an effort towards goal from the corner of the box.

Tottenham did offer a reminder of their threat when Simon Mignolet was needed to save from Heung-Min Son after he’d wriggled into space inside the area.

Play was quickly back at the other end, however, and Coutinho perhaps should have done better when he danced into the area, but his low shot was too close to Lloris.

The chances continued to come; Nathaniel Clyne drew a stop out of the visiting custodian before Lucas hammered a header over the crossbar at a corner before the half-time whistle.

Liverpool continued to threaten a third goal in the opening exchanges of the second half, maintaining the level of pressing that had served them so well in the first 45.

But the chances were not coming as freely or regularly as they had done, with play punctuated by a series of niggling fouls in the middle of the park.

Indeed, Lloris wasn’t tested until just after the 70th minute when Joel Matip sent a glancing header goalwards from a James Milner free-kick, but into the arms of the goalkeeper.

Coutinho then dragged wide of the post from the edge of the area after being teed up by Lallana, but this was firmly Liverpool’s night as they successfully bounced back in emphatic fashion.