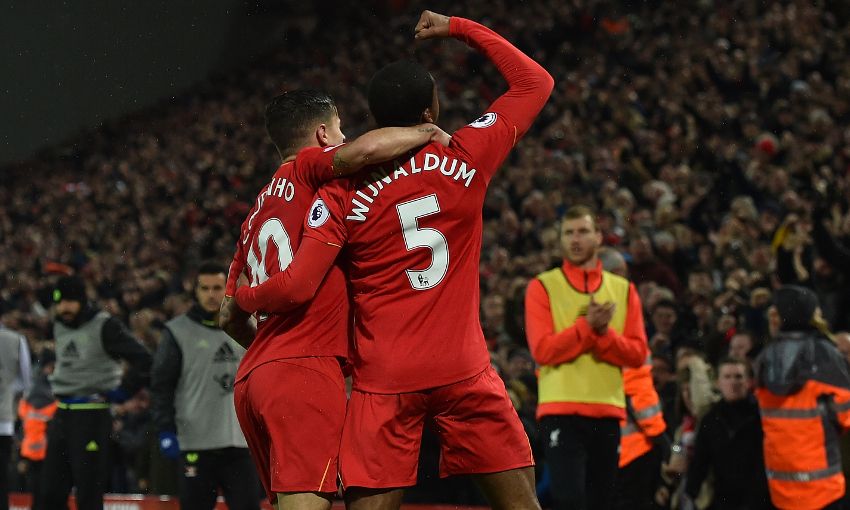 Georginio Wijnaldum was told to get into the box more in the second half against Chelsea – and duly timed his arrival perfectly to level the scores at Anfield on Tuesday night.

At the halfway point of the Premier League clash, Liverpool trailed to a David Luiz free-kick despite Jürgen Klopp’s side having had the better of the proceedings in general.

The manager used the interval to tell Wijnaldum he should attack the area with greater regularity, and the No.5 followed instructions to nod home an equaliser from James Milner’s set-up on 57 minutes.

“At half-time the manager told me I must get into the box more,” the midfielder told Liverpoolfc.com. “Emre [Can] was in the box a few times and he said I wasn’t in the box even one time.

“He said I must get into the box to create a chance – and that’s what I did in the second half. It was an early cross, Millie put it back and I was in the right place to make the header.

“If you look at the overall game, I think we were the better team; they had two good moments, the free-kick and the penalty. But you must be happy with a point, because Simon [Mignolet] stopped the penalty.”

The Dutchman’s contribution might have been rendered meaningless were it not for Mignolet’s fine stop to keep out Diego Costa’s late penalty at the Kop end.

The Reds were in the ascendancy for large parts of the second period, too, as they halted a run of three successive defeats on home soil.

Now the challenge is to reproduce that level of performance in each and every one of the remaining 15 Premier League matches, according to Wijnaldum.

He added: “It says a lot if you come back against a team like Chelsea. But it says more if you can play games like we did today. We must continue the performance of today and then it will say something.

“We showed it against the big teams, but now we must show it against every team. Then it will say more than only today. We must carry on the way we did and we’ll see what happens.”