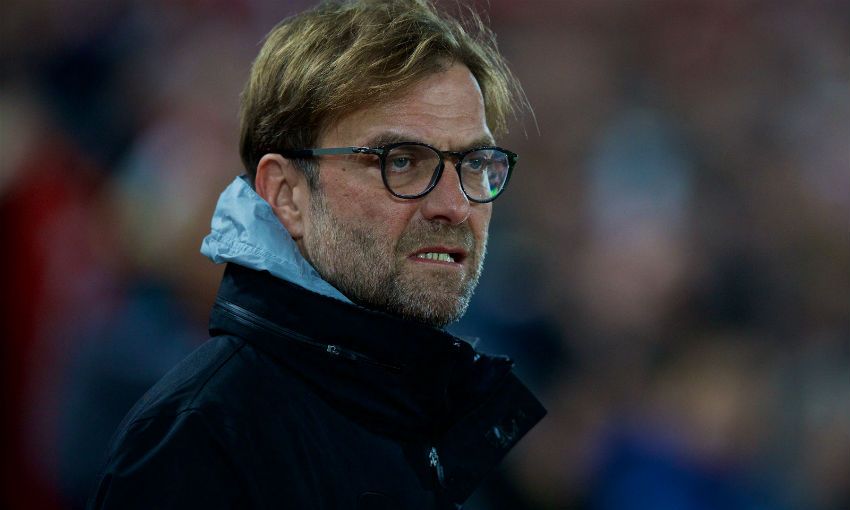 Jürgen Klopp spoke of his pride in Liverpool's performance after his side claimed a hard-fought 1-1 draw with Chelsea at Anfield on Tuesday night.

Georginio Wijnaldum's header shortly before the hour mark earned the Reds a fully-deserved point after David Luiz had put the visitors ahead with a first-half free-kick.

Liverpool had the better of the chances throughout a pulsating clash, but Chelsea spurned a golden opportunity to nick a win when Simon Mignolet saved Diego Costa's penalty 14 minutes from time.

Afterwards, Klopp gave his assessment of his team's display and his view on the rest of the season, before providing an update on the fitness of the returning Sadio Mane, who wore a pack on his knee before coming on as a substitute.

Read on for a summary from the boss' post-match press conference...

On what satisfaction he can take from the game…

I am happy about the performance. I think it was obvious we played against an outstanding strong, outstanding experienced side. I thought we did well; from the first second we were in the game and were aggressive. It felt a little bit to me tonight like [in the] red shirt, we played with readiness, passion, will, greed against experience and coolness, and that's quite difficult. They scored an outstanding goal. I know after not talking about the goalkeeper for one month probably you are ready to talk about him again, [but] I thought it was really smart [from Luiz], it was really clever and really well done, so we have to respect this. Yes, of course, if he [Mignolet] stands next to the post it's an easy save and all the other situations would have been difficult. 1-0 - and that's, of course, exactly what Chelsea want, because they felt there was a lot of pressure here today [against a] good opponent and then you can score a goal like this, usually something happens in your opponent, in this case with Liverpool, but we were still in the game after that.

We had a little problem but we could sort it [out] at half-time. This space where we scored the goal, we wanted to have more crosses. So we had exactly the situation perfect, Phil Coutinho in the space half-right, Emre Can in the box between Azpilicueta and Moses. Unfortunately, we didn't make a cross, that's no problem, but after this Emre was not in the box anymore and Phil was not in the half-right, if you want. So in the second half that's exactly how we scored the goal and we created a few chances then and that caused them problems.

I've said it again a few times [in earlier interviews] - I really prefer a draw like this with a good performance than to have three points and no idea why we got them. The best thing would have been this performance and three points [so] obviously it was not the perfect night for us, but Si saved the penalty so it's OK. I am really fine with the performance and I am happy we could give a little sign we are still part of the league and we're still playing football - and sometimes, really good.

On the award of the free-kick that led to Luiz's goal, Chelsea's penalty and his hopes for the rest of the season…

No, I didn't think it was a foul [on Hazard], but I have no idea actually. I think Hazard, in this moment, wanted a free-kick and obviously it worked! But I'm not too sure, if I watched it again [I would be] but in this moment I have no idea. Nobody told me anything about the penalty, so I think it was a penalty. The problem with this penalty is that we had exactly the same situation against Wolverhampton and there was no whistle. So even when it's right, it's wrong for us! That feels a little bit strange. But like I said, I don't want to talk about this tonight, it was good.

[It was an] unbelievably good atmosphere, I have to say, but this club - we all have to learn. We need to learn to keep our nerve. If you [had] put us in a time machine and brought us 15 matches before the end in fourth position... 'Come on, let's play 15 games with all you have, with everything, full squad, go for it', who would say 'Oh no, please'? I'm pretty sure if we'd won tonight a few guys would have said 'Yes, but we lost at Burnley'. I don't understand this, but when we were really good in the season then we conceded too many goals, then we should've already bought new defenders, all that stuff.

Stay cool, that's a season, a football season, we've worked really hard. As long as this club keeps the nerve and [then with] what kind of power we can create, it's outstanding. Let's stay cool and have a little bit of fun when you think about Liverpool and look ahead and, yes, nothing has been decided until now, but we have a chance. So, go for it and then if not, then it's 14 games, 42 points - go for it. There's a lot to get for us and we will see where it ends.

On the pack Mane had on his knee…

I didn't ask until now but when he came into the dressing room, I saw I don't know exactly what it was, but I had a look at it and said, 'Oh my God, what's happened?' 'All good, all good' [Mane said]. Recovery prevention - cold, hot [packs]. I didn't ask until now, but there are no problems.