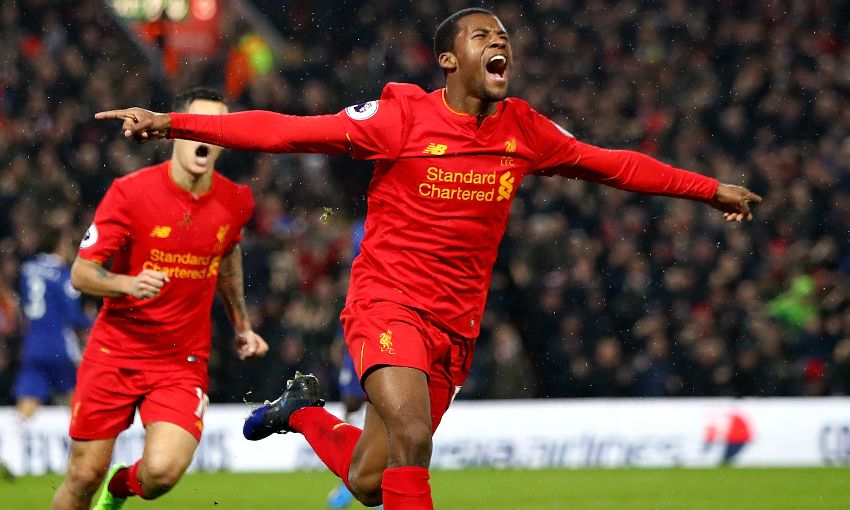 Georginio Wijnaldum's header secured a point for Liverpool as they played out a pulsating 1-1 draw with Chelsea at Anfield on Tuesday evening.

The Dutchman nodded in a fully deserved equaliser in the moments following half-time for the Reds after they’d fallen behind to a long-range David Luiz free-kick in the opening 45.

In an intense encounter on Merseyside, the home side applied heavy pressure as they pushed for a winner; however, Chelsea could have clinched it themselves when they were awarded a late penalty, only for Simon Mignolet to save Diego Costa’s effort.

Nathaniel Clyne was deemed fit enough to start after his recent abdominal/rib injury as Jürgen Klopp made nine changes from the side deployed against Wolverhampton Wanderers on Saturday, with a host of senior stars returning to the fold.

Meanwhile, Mane was named among the substitutes after his return from Africa Cup of Nations duty with Senegal on Monday night.

Liverpool began assertively at a rain-swept Anfield as they looked to emphatically put recent frustrations at home behind them.

With 12 minutes played, Thibaut Courtois was forced into his first save of the evening as he repelled an edge-of-the-box blast from Wijnaldum after being teed up by Philippe Coutinho.

But against the run of play, the hosts found themselves behind at the midway point. Adam Lallana was adjudged to have fouled Eden Hazard 25 yards from goal – and Luiz strode up to dip the free-kick over the wall and in off the post, with many expecting Willian to take the set-piece.

Soon after, with the visitors buoyed, Mignolet was needed to push away Willian’s delivery into the area as it threatened to bounce in at the far post.

But with a raucous Kop spurring them on, Liverpool didn’t allow themselves to become deflated by the setback as they continued to chase, harry and press their opponents all over the field.

Still, Courtois remained largely untested despite the Reds’ exertions and Chelsea went into the break holding onto their advantage.

Liverpool began the second period just as they had done the first – and four minutes in, they should have been level.

A counter-attack dissected Chelsea’s defence and as Lallana attempted to back-heel the ball into Clyne’s path, it deflected across the area to an unmarked Firmino, who uncharacteristically swiped high over the crossbar from 12 yards out.

However, at the other end, Milner didn’t make full contact with the ball when challenging Victor Moses, allowing the former Anfield loanee a clear shot at goal, which struck the outside of the post and went wide.

But Liverpool’s efforts were to be finally rewarded on 57 minutes when they secured an equaliser.

Lallana’s blocked shot on the edge of the area rolled into the path of Jordan Henderson, who arched the ball towards the back post. There, Milner nodded back into the six-yard box, where Wijnaldum arrived to plant a header beyond Courtois.

Now the Reds were firmly in control, with Antonio Conte’s side facing swarms of high-intensity attacks from the home side.

As the contest edged towards the final 15 minutes, Klopp gave Mane the nod to emerge from the bench and provide his side with an extra burst of speed in attack, with the No.19 taking the place of Coutinho.

But within seconds, the Blues were awarded a penalty when Costa went down under the challenge of Matip in the area. The striker elected to take the kick himself, but watched Mignolet push his effort towards the goalkeeper’s right-hand side around the post.

In the closing stages, substitute Pedro was denied by a stunning Henderson tackle before clipping inches wide of the post soon after.

Meanwhile at the other end, Firmino headed straight at Courtois from Mane’s centre as the clock ticked into stoppage-time, meaning the points were to be shared.