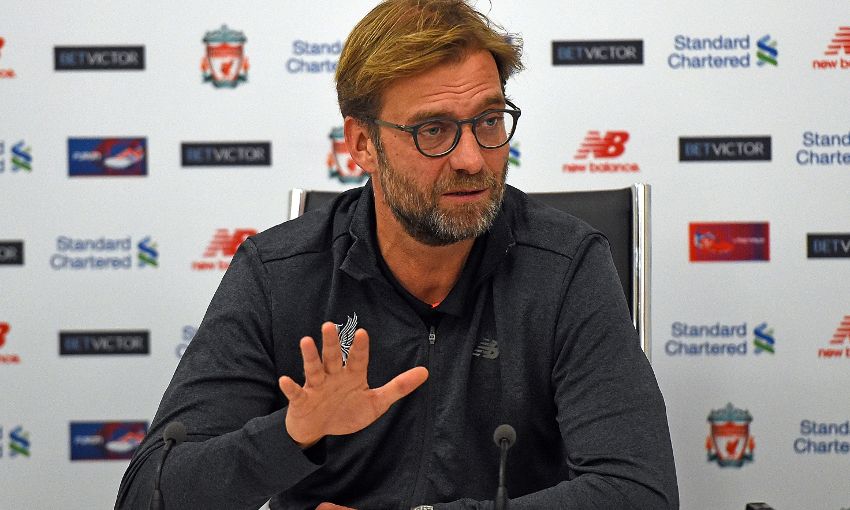 Jürgen Klopp previewed Liverpool's weekend meeting with Plymouth Argyle in the FA Cup third round with a press conference at Melwood on Friday afternoon.

The boss provided the latest update on injuries to James Milner, Daniel Sturridge, Joel Matip and Philippe Coutinho, and hinted that Joe Gomez could be in line for a return to the first team.

He also discussed the potential for Loris Karius to stake a claim for a place in goal when the Pilgrims visit Merseyside.

You can see what else Klopp talked about with the world's media during his pre-match media briefing by reading our transcript below.

How I said before the game, it's not allowed and makes no sense to look at other teams because you have no influence on the games. That's still the case after the game. The Sunderland game, for all of us, was kind of strange. It was my first experience of fixtures like this, I had no real idea what I could expect. I couldn't judge the game properly after the game. What we were really able to do, what could I expect, all those things made it really strange for me. At the end, we were all pretty much frustrated. A game like this, in a situation when you win it 2-1, it doesn't make the game better. Of course it's the perfect thing, because I don't think you can expect the perfect performance in a game like this.

Sunderland did really well in a lot of parts of the game but didn't create a lot of chances, that's how it is. It's still difficult to play them, of course, at home [they are] well organised and all that stuff. Then the game is over and you have one point - it felt like a defeat I couldn't change. I was really happy that Pep [Guardiola] had his press conference and nobody spoke about my press conference! But it's over, it's long ago. On the other hand, you really have to see that when we came together in June and thought about the season - [the] ideas we had, the plan we had, the dreams we had, not that we had the biggest dreams - we thought we could play a good season. When you then finish the first part of the season, there is no time to celebrate or think about it because two days later there's another game. But it's still good. Forty-four [points] after 20 games is another good number, obviously the second best in the league. That's absolutely OK or more than OK but, as I say, that's only the base for the rest of the season - keep on going.

On his hopes for the rest of the season...

Success, staying healthy and fit, things like this. I know what would be the maximum success, of course, but I'm not sure we can do it. But we work to make it a little bit more likely. Before the season, [journalists] asked a lot of questions about the squad and we were convinced about the quality. We had a lot of problems with injuries and stuff like this but we coped with it and that was all absolutely OK. That's what we have to do again. We know more about us - at the start of the season we thought it could work but now we know it can work. But still a long way to go, a lot of games to play, a lot of problems to solve. Usually, I would say this part of the year is the moment to reflect a little bit and think about what happened but we had 24 hours to do it and didn't do it because we had the next game. After the Sunderland game, that was our break of the year and that's what I told the boys. So far, so good, not perfect but all in a good way so keep going.

Whatever I could say is not good enough if the players don't want it. These players want to have success, these players want to take each chance they can get. That made it pretty easy for me. It's not like I do something like [set off] a firework before cup games and say, 'We have no chance to win the Premier League so we have to find another way'. That's not how it is, we don't think like this. We really want to win football games and until now it worked well. It's always an opportunity, it's always a nice chance and that's how we see it with all the cup competitions. Now we play FA Cup third round and you know better than I do it's a historical tournament and we will try everything to win it. Then, we play the first leg of the [League Cup] semi-final in Southampton, that's not an easy game. So, that's all pretty exciting and we look forward to it.

I made my judgement already about them, it doesn't change. I don't [not] let them play for a few weeks then give them one game and say, 'Oh, obviously you are not ready'. We will have a team that has a good chance to win the game, that's why we pick the team. With Plymouth, we have a very confident opponent. They have a long trip, I saw it yesterday on the map - I hope they fly, otherwise it's a really long travel. They are second in the league, they lost their first game for a long period in the last game and that's what we have to respect, [they are] professional football players. But we play at Anfield again and we want to enjoy the game and go to the next round, that's all clear. But it's not about making an assessment of the players and saying they are not ready. The player I pick, they are ready, and if they are not ready it's my fault not their fault.