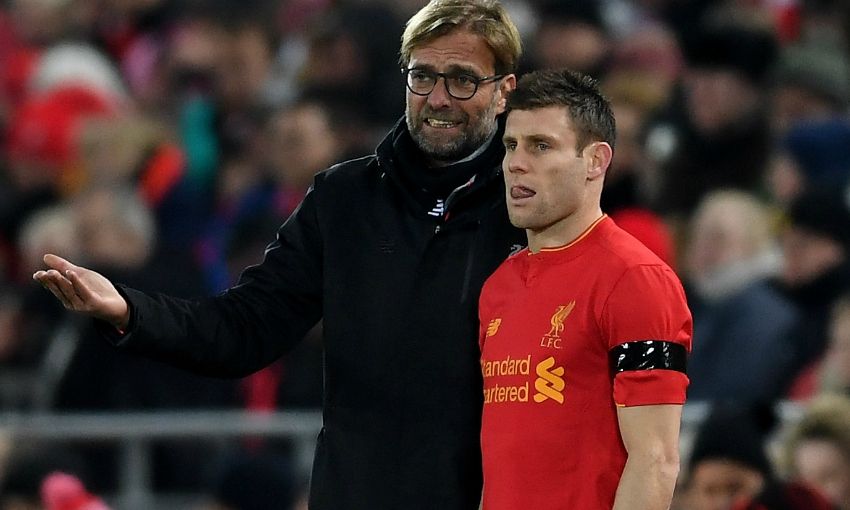 The fact Jürgen Klopp is providing him with fewer instructions as the season progresses is seen as a positive thing by James Milner.

Liverpool’s No.7 has played in numerous positions throughout his 14-year career in the Premier League, but eyebrows were raised in certain quarters when Klopp opted to deploy the versatile Englishman at left-back at the start of this season.

Any doubts surrounding Milner’s suitability for the role were quickly dispelled, though, with the 30-year-old adapting seamlessly to his new place in the Reds’ line-up.

While performing his defensive duties with typical skill and diligence, the ex-Manchester City man has also weighed in with five goals - all from the penalty spot - and two assists in the league this term, with Liverpool sitting second in the table ahead of tomorrow’s meeting with his former club.

Speaking ahead of the visit of Pep Guardiola’s team to Anfield yesterday, Klopp said Milner’s displays this term have come as no surprise to him.

And the Reds’ vice-captain has offered an insight into how his working relationship with the boss has changed since the summer.

“Probably less to be honest, which hopefully is a good sign,” Milner told Liverpoolfc.com, when asked whether he is receiving more or less input from Klopp and his coaching staff as the season wears on.

“I think obviously when things are new you’re going to need a bit more guidance and I’ll be asking questions if I’m not sure on things. If you’re doing something wrong, they’ll tell you but if they’re happy with the way things are going then they’ll let you get on with it.

“Obviously there’s odd games where there are special instructions or things you might want to do a bit differently to normal, but other than that there hasn’t been too much so hopefully that means I’m not doing too much wrong.

“But you can always improve and obviously there’s instances in games where I need to check certain things I’ve thought of in the game, or something where I wasn’t sure.

“But I’ve been playing a long time and I think you’re always watching and learning from other players you’re playing with as well, and a lot of the principles are the same. Hopefully I can keep improving and keep contributing to the team.”

LFCTV GO: Milner discusses his adaption to his new role

Having played in more advanced positions for the majority of his career, Milner explained that the hard work being put in at Melwood is helping him adjust to the mindset of being a defender.

“There’s times with the way we play that you find yourself covering someone else’s position and you have to make sure that you’re doing the job properly and fully understand it for that period of time.

“I don’t think that’s changed, it’s probably just being comfortable more than anything, there’s obviously times that I’ll make mistakes and times that I won’t be 100 per cent sure but the more you do something, the better you’ll get and the more you learn.

“Obviously I’ve been playing there non-stop in training every day as well so yeah, I’m doing as well as I can and hopefully I can keep improving.”

While left-back is not Milner’s favoured position, he went on to say that he is happy to play anywhere for Liverpool.

“I just want to be part of this team and I want to help the team, and I’m enjoying being part of this football club. We have a great bunch of players here, a fantastic, talented group, a young group as well and hopefully I can help them as much as I can with my more seniority now unfortunately!” he continued.

“It’s not just the team, it’s the squad, and you see what quality we have coming in and the lads on the bench, and the young boys as well.

“It’s a good time to be in and around the team and there are lads on the outside desperate to take our shirts, so you have to be on your toes, and that’s what you need to be successful - competition for places.”