It was an easy mistake for Joe Gomez to make.

After a year and a month without the chance to do the thing he loves – play football – the Liverpool defender was about to gleefully step into the light at the end of the longest tunnel of his life.

A game awaited him. A return to the pitch that he had envisioned countless times throughout a cruelly long lay-off. A first opportunity to show Jürgen Klopp what he is capable of in a match environment.

“It was a big moment for me,” the 19-year-old recalls, in conversation with Liverpoolfc.com.

The drive in to Melwood, where Accrington Stanley were set to provide the opposition in a friendly during the November international break, carried Gomez towards the next step in his gruelling rehabilitation from anterior cruciate ligament and Achilles injuries.

He was all set. But something was missing.

“I forgot my shin pads in the car,” Gomez reveals with a laugh. “It didn’t come to my mind because I hadn’t used them for 13 months.

“I just enjoyed being around it again. It was a bonus that I got 45 minutes straight away.

“I’m still very young and I feel like I’ve played in quite a few important games, but in terms of my personal development that was definitely a big game.

“After such a long period out and a lot of time spent thinking about when I was going to play again, when that finally came it was a big moment for me to just play in a game, more so for myself than anything.

“It is the little things, just being involved and like at Middlesbrough on Wednesday, being in the dressing room – even though I wasn’t in the squad, travelling with the team and being in that environment.

“Those little things are big to me. Hopefully, as time goes on, they become more normal again.”

Gomez sourced an alternative pair of shin pads, of course, and featured in the second half of the 5-0 victory against the League Two side that day.

The relief was enormous.

Seven first-team appearances at the beginning of his Liverpool career, following a move from Charlton Athletic in the summer of 2015, had shown such promise that the No.12 won a regular spot at left-back almost immediately.

An assurance beyond his tender years encapsulated Gomez’s performance at Emirates Stadium in only the third Premier League match of that campaign.

August 2015: The best of Gomez against Arsenal

But then, at the same time that Klopp was taking over the managerial reins at Liverpool, the defender sustained the ACL injury on England U21 duty.

The scan results which confirmed the extent of the damage – and the likely spell out of action – were received a matter of minutes before Gomez’s first meeting with the new boss at the training ground.

“It was very immediate, from when I found out to when I spoke to him. It was within half an hour of me finding out,” the young man explains.

“I came back to Melwood from the scan and was on the phone to my mum, dad and girlfriend right up until I spoke to him. I was still very emotional and it was very raw.

“But it was a big chat for me because it helped me. It was the first time meeting him, we got a first impression of each other and he said some reassuring things – for me to be patient, it’s not the end of the world, I’m still young and I’ve got to take my time to come back, that he’ll be waiting for me to come back.

“That was a push for me to get started with my rehab and be in a positive place. It was massive for me.”

And Klopp has kept his word, waiting patiently and revealing his appreciation for a player he has not yet been able to pick on each occasion that he is asked for an update on his recovery.

“Joe is an unbelievable talent,” the manager commented earlier this month. “It was a long injury and if we send him on loan, with his quality, a team will play him every game.

“That is not what he needs. Because he was a long time injured, he needs us to judge. He’s our boy for the future, 100 per cent.”

Conversations based on a much more positive outlook are now taking place between the pair.

“We spoke a bit about the future, loan talk and stuff like that,” says Gomez. “My aim isn’t to go out on loan – I want to challenge here, that has to be my aim after a long time out.

“At the same time, I haven’t trained under him for a year. Only in the past seven or eight weeks is the first period of time I’ve got to train under him and with the team.

“Me coming back and rushing straight out, there are pros and cons to it, but it was a compliment for him to say that. I’m thankful that he sees it that way.

“I’ve got to do what I can in training and try to work my way back into things. At the moment, I’m focused on developing and learning under him, learning the team’s style of play and being myself again.” 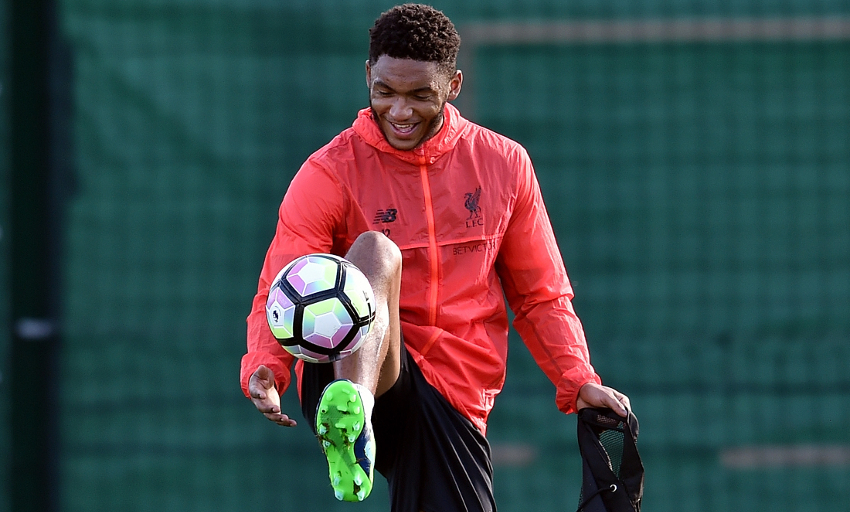 In the Englishman’s absence, much has changed at Liverpool.

Klopp’s charges reached two finals last term and have continued along their upward trajectory by being among the early challengers in the Premier League this season and securing a place in the EFL Cup semi-finals.

Gomez has tracked their development from his enforced distance, aware that when the opportunity came to re-join the squad he would have to be clued up on the requirements.

“Because the team is in a rhythm it’s not like every week you can start from the beginning and explain everything,” he states.

“But that was one positive from the injury – I watched a lot of games. I watched every game in the stand, so you get to gauge how the team plays.

“And obviously there is the analysis team you can get clips from. It doesn’t replicate actually getting instructions from the manager but it was a start, and that’s something I still need to work on because it’s important to know how the team plays, tactically.

“I’ve still got learning to do. But I learned quite a bit watching football for a year; it does help, because you take more time to look at small details. You take it for granted. When you’re injured, it means more.

“I did learn quite a lot off the pitch. But I’ve still got some learning to do, tactically, to understand the full tactics of the team. I’m taking the time to do that now.”

Gomez adds: “It’s got a different feel this year.

“I feel that when you walk into the dressing room, everyone feels as if we can beat anyone – no team can come to Anfield and we’re not confident we can beat them. That’s crucial. It shows what the manager has done.

“With the first full season here, we’ll really get to show what the team is capable of. We’re still a young team and there’s so many talented players that the team can go on to do great things in the future.

“Hopefully that happens. It’s all down to the team’s work-rate and the manager – hopefully we can fulfil the potential.”

Team spirit is a central tenet of the Klopp philosophy.

And it extends beyond just the playing squad and manager’s staff to all of those working behind the scenes at Melwood and around the club to bring success to Liverpool.

Hours upon hours upon hours of collective endeavour, not least by the dedicated team in the medical department, have underpinned Gomez’s rehabilitation – making his recent steps particular cause for celebration.

So when he walked out for his first training session since the injury, back in mid-October, it was to the sound of loud, sincere applause.

“When you are injured, you think about all the little things,” says the defender. “So obviously my first session was a massive thought in my mind for months.

“It meant a lot that they took the time to do that. I’m not someone that likes a big deal to be made. But it was touching for me and I was thankful, I appreciated it a lot.

“It was one of those moments where you don’t know what to do with yourself. It was really nice. It shows what sort of family-orientated place this club is and that’s what I love about being here.

Stay logged on to Liverpoolfc.com for part two of our in-depth interview with Joe Gomez next week, in which he reflects on the mental strength required to deal with a long-term injury.