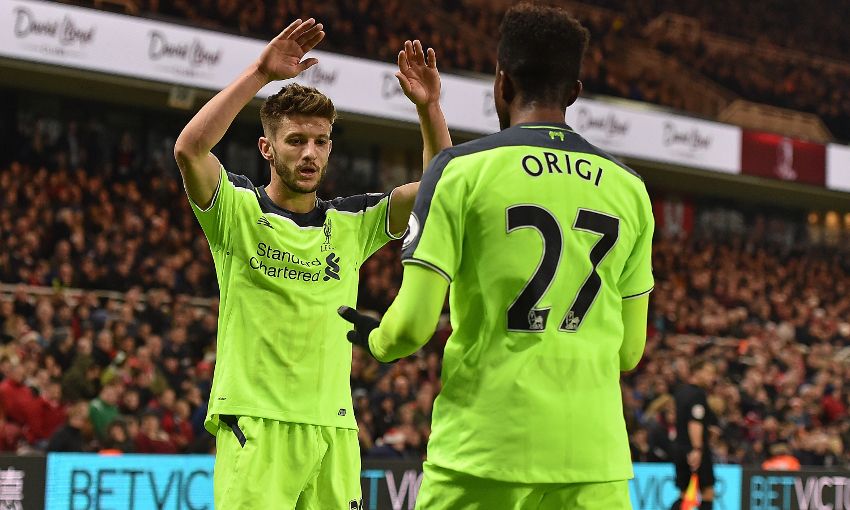 Adam Lallana scored twice and provided an assist as Liverpool earned a comfortable 3-0 win over Middlesbrough at the Riverside Stadium on Wednesday evening.

The No.20 opened the scoring with a brave header in the first half before helping double the Reds' lead by teeing up Divock Origi on the hour mark.

And he rounded off a Man of the Match performance by sealing the points late on, smashing home with his left foot after marvellous build-up from the visitors.

Victory over the Teesiders, combined with Arsenal's defeat to Everton yesterday evening, allowed the Reds to reclaim second spot in the Premier League.

Jürgen Klopp made two changes from the team that was held to a 2-2 draw by West Ham United, with a switch between the sticks as Simon Mignolet replaced Loris Karius.

And in the back four, injury to Joel Matip forced a further alteration, with Ragnar Klavan coming in for his fellow centre-half.

As has been the case so often this season, the Reds quickly took control of possession, pinning the hosts in their own half.

However, a blocked Lallana strike and a threatening pull-back from Georginio Wijnaldum were all Klopp's men had to show for their efforts before Boro grew into the game.

Fabio's shot was the first of the match to hit the target, and it required good hands from Mignolet in the visitors' goal to hold onto the ball with attackers lurking.

Liverpool replied instantly, with both James Milner and Origi seeing shots stopped inside the box, but Boro again forced Mignolet into action almost immediately as he had to save from Ben Gibson's header.

And the Belgian's efforts were rewarded at the other end in the 29th minute as the Reds took the lead.

A slick exchange of passes resulted in Sadio Mane spinning and funnelling the ball out to Nathaniel Clyne, whose cross was met forcefully at the back post by the head of Lallana to put the visitors ahead.

To their credit, Aitor Karanka's men bounced back immediately, and were again cursing the presence of Mignolet as he produced a fine near-post stop to keep out Viktor Fischer when many expected a cross.

But, while Boro continued to threaten as the half wore on, it was Liverpool who went closest before the break.

Mane and Origi combined brilliantly to put the former in on goal but his low, left-footed finish came agonisingly back off the far post as the hosts made it to half-time just the one goal down.

Liverpool started the second half in fine fettle, and almost had an immediate second goal when Mane burst in behind but couldn't get a shot away before a fine block denied him.

The Senegal winger again went close from a Roberto Firmino knockdown before his cross was nearly met by the arriving Lallana as the pressure on the hosts' goal increased.

Karanka looked to turn the tide in Boro's favour as he made a double substitution, bringing in Grant Leadbitter and Stewart Downing, but with an hour gone the Reds produced the move of the match to go two goals ahead.

Wijnaldum and Mane traded passes before the latter poked the ball through to Lallana, who had the presence of mind to pick out the arriving Origi for a satisfying tap-in at the back post.

The Reds could have been content to sit back at that point, but they appeared determined to extend their advantage and continued to pour forward when the opportunity presented itself.

Boro were powerless to resist the tide, and when Origi received the ball in the box after a good advantage allowed play to run following a trip on Mane, the young striker returned the favour by teeing up Lallana for his second of the night.

The English midfielder was subsequently replaced by Lucas Leiva as Klopp looked to tighten things up, and received a deserved rapturous ovation from the travelling supporters.

And they remained in fine voice until the final whistle 10 minutes later, clearly satisfied with an excellent performance from their team.