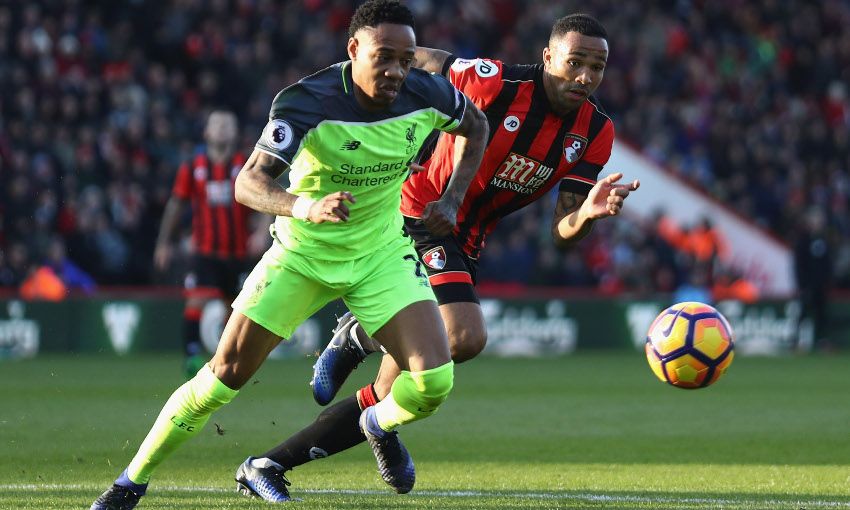 Liverpool were beaten for only the second time in the Premier League this season as a Bournemouth comeback inflicted a 4-3 defeat at Vitality Stadium on Sunday afternoon.

First-half strikes from Sadio Mane and Divock Origi gave Jürgen Klopp’s side control of the contest at the break, but the hosts fought back after the interval.

A Callum Wilson penalty early in the second period first gave hope of a comeback for the Cherries, only for Emre Can’s delightful finish to restore a two-goal cushion.

But substitute Ryan Fraser scored one and then set up Steve Cook to slam a leveller beyond Loris Karius, before Nathan Ake forced home a fourth in stoppage-time.

Klopp made two changes to the starting line-up that began Liverpool’s previous Premier League game, with Lucas Leiva and Origi replacing Joel Matip and Philippe Coutinho – who were ruled out due to ankle injuries.

Adam Lallana was fit enough to be among the substitutes, while young trio Trent Alexander-Arnold, Ovie Ejaria and Ben Woodburn were also on the bench.

Liverpool should have taken the lead with the first opportunity of the match.

After a period of methodical passing by both teams, a sudden quickening of the pace in the 10th minute saw Jordan Henderson find Nathaniel Clyne in space on the right but the full-back’s perfect low cross into the middle was completely miscued by the unmarked Origi.

There was little other goalmouth action to speak of during the opening 20 minutes – but it was at that point in the contest when Klopp’s men landed a double blow on their hosts.

Can’s looping knock into the left channel appeared relatively harmless until Mane beat Ake to the ball, held off the Bournemouth defender and prodded a finish underneath Artur Boruc as he rushed from goal.

The lead was doubled within two minutes courtesy of Origi’s third strike in as many games.

Mane was involved again, winning back possession and feeding Henderson, who immediately spotted a chance to spin a pass in behind the home defence for the Belgian to run onto.

Boruc scampered from his net but Origi was first to the ball on the right hand side and, after gliding around the ‘keeper, swerved an outstanding shot into the far corner for 2-0.

Liverpool were in control but the Cherries continued to play and threatened to reduce their arrears on several occasions before half-time.

First, Junior Stanislas released Joshua King inside the area for a cross-shot that was blocked out by a combination of Karius and Dejan Lovren at the near post.

Then they had vociferous appeals for a penalty – as Ake tumbled under a challenge from Roberto Firmino – turned down and the score remained unchanged at the break.

Former Reds winger Jordon Ibe entered the action at the outset of the second period and Eddie Howe was forced into another change early in the half when Stanislas picked up an injury. Fraser came on.

And the substitute instantly won his side a penalty on 56 minutes, drawing a foul from James Milner in the box as he tried to surge towards goal.

Up stepped Wilson from 12 yards and the Bournemouth striker coolly sent Karius the wrong way with his low spot-kick to the left.

The home side’s hopes of mounting a significant comeback soon appeared to be extinguished, however, thanks to an emphatically precise finish from Can after Mane made ground in Cherries territory and pulled a pass back to the German.

Lallana completed his return from injury as a substitute midway through the period, replacing goalscorer Mane, who appeared to have picked up a knock himself.

Karius was called into action to tip over a drive from the lively Fraser, but the sub set up a tense finale on 76 minutes when he exchanged passes with Wilson and found the bottom corner after a fortuitous bounce.

And it was then his cross moments later which found Cook inside the area, the defender controlling, turning and clipping home an unstoppable equaliser at a now raucous Vitality Stadium.

Karius got his body in the way of a blast from Benik Afobe to prevent the hosts from going in front, while Origi swept one over in stoppage-time.

It was Bournemouth who found the winner, though, as a shot from the left was fumbled by Karius and Ake seized upon the rebound to convert.