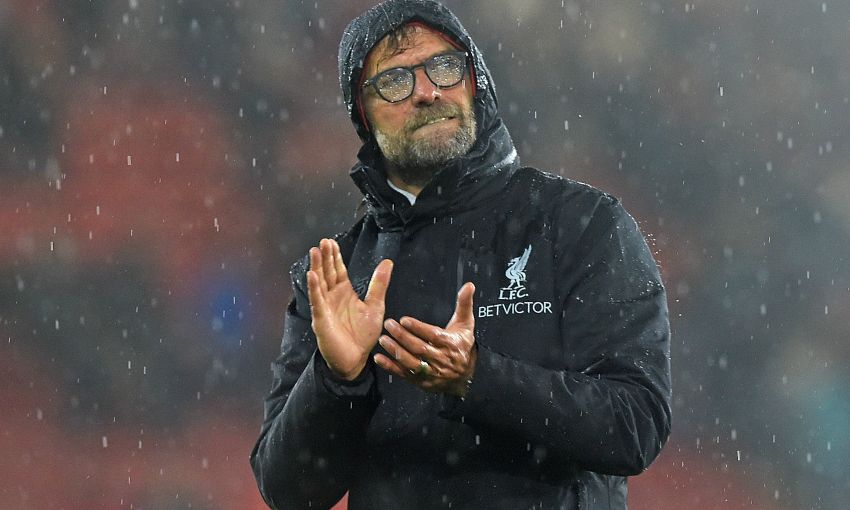 Liverpool's status as one of the Premier League's most potent attacking forces means they are now regarded as a 'team to stop', Jürgen Klopp believes.

The Reds failed to score for only the third time in 12 top-flight outings this season when they were held to a 0-0 draw by a resolute Southampton display on Saturday.

Klopp’s side spent much of the game at St Mary’s on the front foot, racking up 15 attempts on Fraser Forster’s goal while, for the first time since their return to the Premier League in 2012, the Saints did not have a single shot on target throughout the 90 minutes.

Despite the stalemate on the south coast, Liverpool remain the division’s leading scorers with 30 goals so far this term - and Klopp feels it is up to him and his players to find a way of breaking down opponents whose top priority is to stifle the Reds.

“[Last month’s 0-0 draw against] Manchester United was different, we were not that good against United,” said the manager, who was more than satisfied with his team’s performance at St Mary’s.

“A lot of teams play like this against us, we cannot change what they do. I don’t know what they think, you have to ask them.

“We are [a team] to stop, unfortunately. The only thing what we have to make sure is that it’s not because of us, that’s what I’m so happy about today.

Philippe Coutinho, Roberto Firmino, Emre Can and Nathaniel Clyne all missed presentable opportunities as Liverpool dominated the second half, but Klopp added: “It’s absolutely no problem, we created enough chances.

“It’s not my job to talk about the other team, you have probably seen them more often than I did, but the games we watched, even against Chelsea, they were much more offensive in different moments than today.

“We made a lot of pressure, it was only about counter-attacks, a few moments that made it difficult, but in 94 minutes, we were always ready to press them as high as necessary.

“Both full-backs always pushed back and run in the right spaces, so I don’t think they had a lot of fun today, but that’s one job you have to do in a football game.

“Of course we should have scored but I’m really fine with the result, that’s how it is, and more with the performance.

“It’s not about that they have respect or something, everybody wants to win.

“If we play this kind of football, it would be crazy to give us space, so why should they do that? We have to work on this, it’s our job to do, the players and all the staff, it’s never easy.