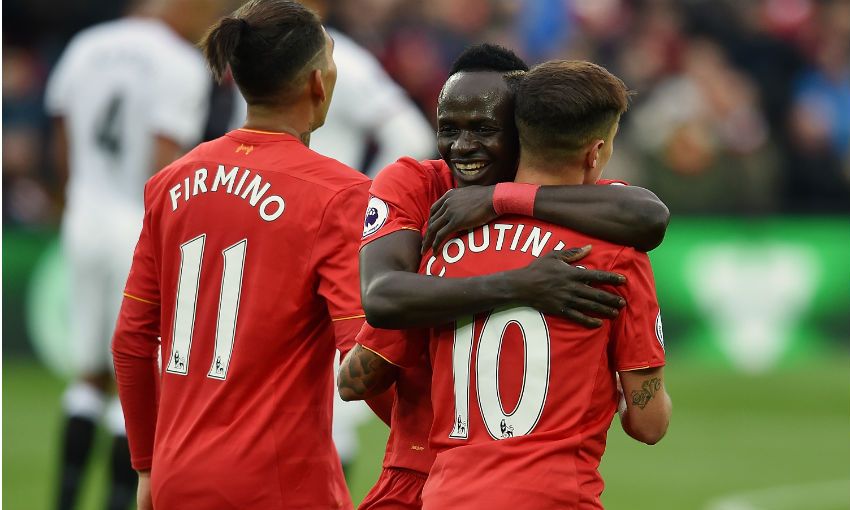 Jordan Henderson has labelled Roberto Firmino, Philippe Coutinho and Sadio Mane ‘world-class players’ who have the ability to make defending against Liverpool feel like a thankless task.

Firmino, Coutinho and Mane continued their whirlwind start to the season on Sunday, as Watford became the latest team to find it impossible to contain the relentless movement, class and goal threat of the Reds’ front three.

The trio all got their names on the scoresheet as Liverpool moved top of the Premier League with a resounding 6-1 victory over the Hornets at Anfield and, collectively, they have scored 16 of the 30 top-flight goals netted by Jürgen Klopp’s side in the top flight this season.

And, speaking after the Watford game, their captain praised both their quality and attitude.

“They are world-class players. Their understanding of the game, not only going forward, but also the work rate they all give for the team in terms of pressing and winning the ball back high up the pitch,” Henderson said.

“They all help the team defensively. The three of them are fantastic at that and going forward they are unstoppable when they are on it.

“I see them every day and, for me, they are world-class players. It’s a pleasure to be playing with them. It’s our job to ensure we offer protection for them when they are going forward and expressing themselves.

“As a team I feel as though we have a lot of quality and in the final third they’ve been brilliant over the past few weeks. It was very good from them against Watford but then I thought we were very good throughout the whole team.”

Mane’s double against Watford took his tally to six goals in 10 Premier League appearances for Liverpool, including five in five games at Anfield.

The Senegal international has slotted seamlessly into Klopp’s team since his summer switch from Southamtpon, and Henderson believes his teammate deserves great credit for the manner in which he has adapted to his new surroundings.

“Sadio was a big talent at Southampton. From the performances he put in and the goals he scored, you could see the ability he had,” the skipper added.

“But since he's come here he's gone up another level. You have to give credit to the manager and to his staff for that, as well as to Sadio himself for the work he's put in.

“He's gone up another level tactically and in terms of intelligence. I'm sure Sadio would tell you the same. But he's also put in the hard work and that's what's getting him the rewards.”