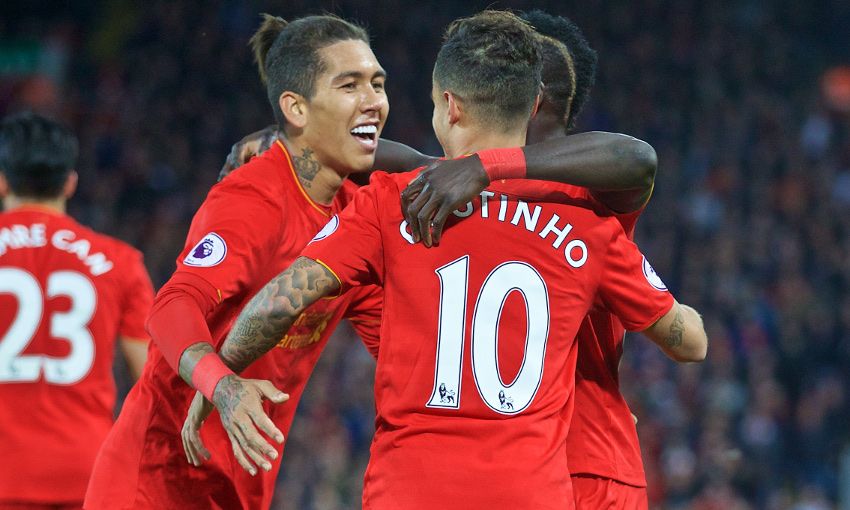 Liverpool returned to winning ways in the Premier League with a fully-deserved 2-1 victory over West Bromwich Albion at Anfield this evening.

First-half strikes from Sadio Mane and Philippe Coutinho ensured the Reds got the three points their dominance merited after they were held to a 0-0 draw by Manchester United last time out.

Jürgen Klopp’s side bossed proceedings from start to finish, and would have added gloss to the scoreline in the second half if not for some resolute defending from West Brom, who found an unlikely way back into the game when Gareth McAuley smashed home from close range with nine minutes remaining.

But Liverpool held on and are now unbeaten in their last seven Premier League outings, sitting second in the table, behind Arsenal on goal difference.

•    Mane finishes a free-flowing team move to put Liverpool ahead in the 21st minute.

•    Coutinho doubles the Reds’ advantage with an excellent finish 10 minutes before the break.

•    Ben Foster produces an outstanding one-handed save to keep out Dejan Lovren’s header early in the second half, before McAuley pulls one back for West Brom.

Klopp made one change to his starting line-up from the 0-0 draw with Manchester United, with Adam Lallana coming back into the team in place of Daniel Sturridge. Georginio Wijnaldum was named on the bench after missing Monday’s match due to injury.

Liverpool were in charge from the first whistle, with James Milner having their first attempt on goal of note in the 18th minute. Jordan Henderson swung in a cross from the right and Milner climbed highest but could only head over Foster’s crossbar.

The Reds didn’t have to wait much longer to make the breakthrough, though. Emre Can broke from deep and latched onto Milner’s pass after a brilliant dummy from Coutinho.

The midfielder found Roberto Firmino on the left, and Mane calmly volleyed home the Brazilian’s pinpoint cross from close range.

Lallana curled an effort over with his left foot shortly after the half-hour mark, but Liverpool got the second goal their authority deserved in the 35th minute.

Mane collected Foster’s miscued clearance before feeding Coutinho, who ducked inside two West Brom defenders and coolly beat the goalkeeper at his near post.

Klopp’s team picked up where they left off after the interval, enjoying total control of the ball while pinning West Brom back into their defensive third.

More sharp interplay around the penalty area ended with Firmino having a close-range shot blocked, before Foster produced an impressive one-handed save to keep out Lovren’s glancing header from Coutinho’s outswinging free-kick.

A desperate last-ditch block from Jonas Olsson prevented Can from making it 3-0 in the 65th minute and Nacer Chadli wasted a presentable opportunity to reduce the deficit against the run of play when he side-footed wide after a Chris Brunt corner.

Another dangerous set-piece ended with McAuley firing past Loris Karius to threaten an unlikely comeback from the Baggies with nine minutes to play.

But Liverpool kept hold of their lead to seal their sixth win in nine Premier League games this season.