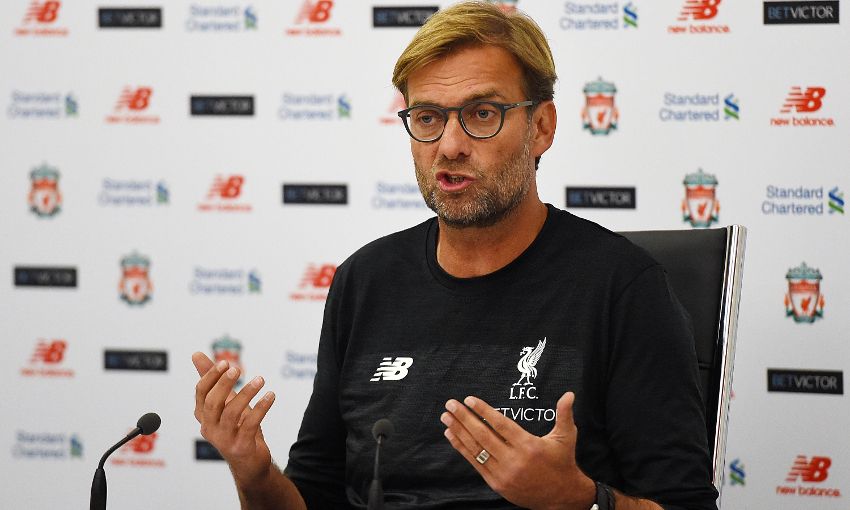 Jürgen Klopp is well aware that Liverpool are welcoming a 'really strong side' to Anfield on Monday – but the manager will nevertheless send his team out to continue playing their own style.

The latest chapter in the long-running rivalry between the Reds and Manchester United is now within touching distance, after a lull in the season for the international break.

It will be a different United team to the one Klopp’s men eliminated from the Europa League in their last meeting, with Jose Mourinho at the helm and new faces in his line-up.

The boss admits Liverpool will be dealing with top opponents but intends to formulate a plan that involves his charges maintaining the mentality that has so far earned five wins from seven Premier League games.

“They are really world-class players,” Klopp said at his pre-match press conference.

“Their team is not worse than last year, for sure. I would like to say something else but unfortunately a really strong side from Manchester is coming to Liverpool.

“They really know about football, they are experienced and they are cool in the right moments. They don’t need a world-class performance to win a game, that’s the biggest difference between experienced and less experienced teams.

“Less experienced teams, you need to feel good in a game to show what you are able to do. If you are more experienced, you know even on rainy days, it’s possible to score and win a game.

“They have these competitors in the team, these winner types in the team. It doesn’t mean they will win the game, it only means they have a really good chance and we have to defend them. That’s what we’ll try to do.

“It’s not that I go in the meeting with the players and say ‘they are very experienced’. It’s more [about] how they play and where the spaces are we can use, and the specific things they do in special situations, how they defend there and there. That’s what we try to use.

“But we don’t know if they’ll do it against us – that’s always the problem with analysis.”

He added: “We’ll try to bring through again our style of play, not because we love it so much, only because we are convinced about the value of this kind of play.

“Maybe, I’m not sure, but maybe we have to change formation to the last two games. But that’s then a nice opportunity again to bring another player or other players in the team and to show that we are still able to really perform well.

“It’s always a chance and that’s all I think about, not how big the quality of Manchester United is. But it’s obviously not too bad.”