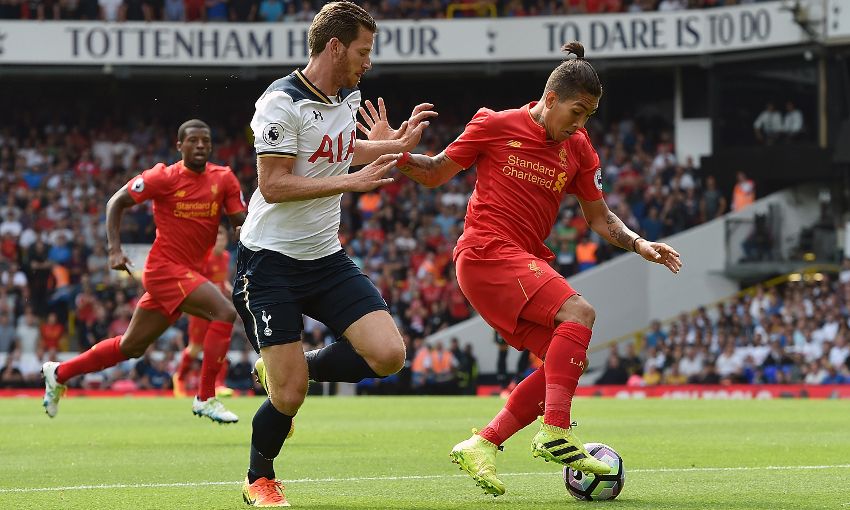 Liverpool were held to a 1-1 draw by Tottenham Hotspur at White Hart Lane on Saturday afternoon in an entertaining Premier League encounter.

James Milner put the Reds into a well-earned lead just before half-time when he successfully converted a penalty after Roberto Firmino had been tripped.

Jürgen Klopp’s men were full value for their advantage and continued to press in the second half; however, Danny Rose levelled when he collected Eric Dier’s cross and found the target with a close-range half-volley to secure a share of the points for Spurs.

Liverpool were able to name Philippe Coutinho in their starting line-up after the playmaker was passed fit having missed the midweek EFL Cup win at Burton Albion with a knock.

There was also a first Premier League berth for Joel Matip at the heart of the defence, while Divock Origi and Daniel Sturridge were named on the bench. Emre Can missed out due to an ankle issue.

The contest gave way to a frenetic start in north London – and the Reds should have perhaps taken the lead with just four minutes on the clock.

Adam Lallana regained possession from Victor Wanyama high inside the Tottenham half, prodding the ball into the path of Sadio Mane, who in turn fed it into Firmino inside the box.

The No.11 then squared into the unmarked Coutinho, but his attempt to divert the ball into the bottom corner with a reverse shot was thwarted by an instinctive save from Michel Vorm.

Then, after Christian Eriksen had forced a stop from Simon Mignolet with a free-kick from the left at the other end, Coutinho was involved in another opportunity for Liverpool when his presence forced Kyle Walker to deflect Mane’s attempted pass towards his own goal. The hosts again had Vorm to thank as he clawed the ball away, although the sight of a raised flag meant it wouldn’t have stood had it crossed the line.

Spurs had made a purposeful opening, but the Reds really began to take control of proceedings as the half edged towards its midway point – and after Vorm twice had to come from his line to tackle Mane to prevent him from reaching through balls, Coutinho went close to breaking the deadlock on a couple of further occasions.

First, his dash in from the left resulted in a strike being deflected over the crossbar by Toby Alderweireld before another gilt-edged chance inside the box was smothered by Vorm at his near post after Mane’s flicked pass had again found the Brazilian unattended.

But finally, a deserved opener arrived three minutes before the interval via the penalty spot.

Firmino burst beyond Erik Lamela near the touchline on the left of the hosts’ box before being tripped by the Spurs winger. Milner duly did the honours from the resulting kick, dispatching beyond Vorm with aplomb to ensure Klopp’s side went into the break with an advantage.

There was no sign of Liverpool relinquishing their grip on the game after the break, with Georginio Wijnaldum clipping over the bar in the opening seconds.

Soon after, Matip skimmed a header from Milner’s corner onto the top of the crossbar and over as the Reds looked to increase their advantage.

Indeed, Liverpool thought they had grabbed a second when a speedy counter-attack culminated in Wijnaldum finding Lallana’s burst into the area. He squared for Mane to side-foot in from inside the six-yard box, but celebrations were cut short by the raised flag of an official, although TV replays suggested the decision was tight.

But Tottenham spurned an opportunity to draw level just after the hour when Eriksen side-footed over the crossbar from Jan Vertonghen’s low delivery from the right.

Lamela then brought a save out of Mignolet with a fizzing free-kick from the right that the ‘keeper needed to turn over the bar. From the resulting corner, the No.22 produced another fine stop to prevent Alderweireld’s near-post header from finding the net.

As the contest entered its final quarter, Klopp opted to introduce Origi into the action in place of Coutinho; however, with the home team enjoying their best spell of the afternoon, the scoreline was levelled on 73 minutes when Rose collected a half-cleared cross inside the Liverpool box and squeezed a strike beyond Mignolet after a touch to steady himself.

Both sides threatened to snatch a winner in the dying stages, but there were to be no further marks on the scoresheet as the teams had to settle for a point apiece.