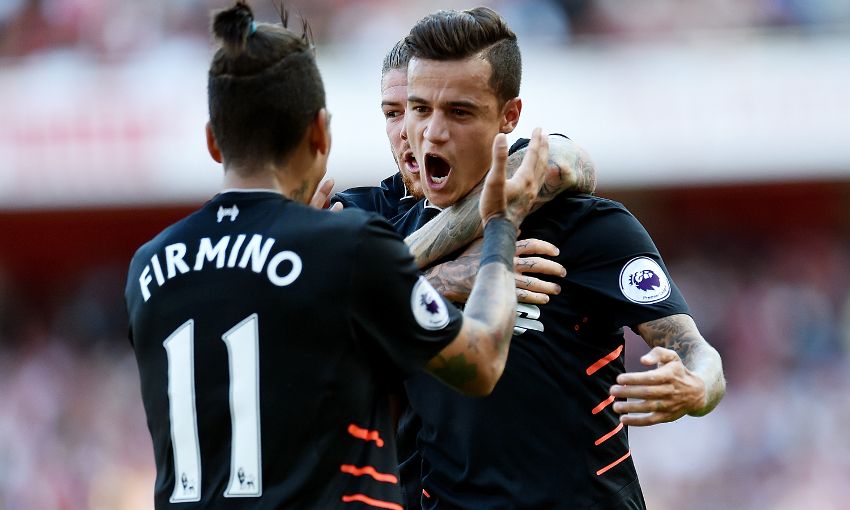 Liverpool kicked off the new Premier League campaign with a win in remarkable circumstances as they bested Arsenal in a seven-goal thriller at Emirates Stadium on Sunday, emerging 4-3 victors.

The Reds needed to come from behind after Theo Walcott opened the scoring midway through the first half but responded in fine style as Philippe Coutinho netted twice either side of an Adam Lallana strike and Sadio Mane also got on the scoresheet.

What should have been a straightforward conclusion for the visitors turned nervy as Alex Oxlade-Chamberlain and Calum Chambers gave the Gunners optimism.

However, Liverpool held on at the end of an eventful fixture that also saw Simon Mignolet save a penalty to start 2016-17 with a win over last season's runners-up.

Jürgen Klopp handed Ragnar Klavan, Georginio Wijnaldum and Mane their first Premier League starts for the club as part of an adventurous line-up.

Arsene Wenger, meanwhile, was forced by injuries to name the inexperienced duo of Rob Holding and Chambers in the centre of his defence - though that mattered little as the hosts made a bright start.

A slick exchange at the edge of the Liverpool box created the Gunners' first big chance, but Aaron Ramsey could only poke straight at Mignolet from close range.

And the Reds responded by going close themselves, with Nathaniel Clyne firing in a low shot at Petr Cech after the ball had been funnelled out to the right hand side of the box.

Despite some promising forays into Arsenal territory, the visitors were letting themselves down on occasion with sloppiness at the back.

Alberto Moreno's misplaced header meant the Spaniard was required to put in a last-ditch challenge on Ramsey in the area, and he was involved again as the Gunners were gifted a golden chance moments later.

As the No.18 attempted to clear the ball under pressure from Walcott, he inadvertently brought the Arsenal man down to concede a penalty - though his blushes were ultimately spared by Mignolet's fine save from the spot-kick.

The Reds' stay of execution was short-lived, however, with Arsenal taking the lead when a turnover of possession in midfield resulted in Walcott being fed on the right of the box. This time, the forward made no mistake with a low finish into the far corner.

Liverpool responded well to the setback, with Roberto Firmino going close and Wijnaldum seeing a low shot saved after an excellent team move.

And Klopp's side saw their endeavour rewarded on the stroke of half-time, as Coutinho brilliantly curled a self-won free-kick into the top corner of Cech's net from around 35 yards out to level the scores.

On the basis of their first-half performance, Liverpool were perhaps fortunate to find themselves level, but they more than made the most of that fact in a blistering start to the second period.

With just four minutes of the half elapsed, the Reds sprung a counter that released Wijnaldum into the box, and the Dutchman kept his cool to pick out the arriving Lallana at the back post.

The No.20 was equally composed with his close control - and in producing a dinked finish that gave Cech no chance.

And it took just five minutes for the visitors to add to their lead, with Coutinho slamming home emphatically in the box after Clyne picked out a fine low cross from the right hand side.

If the second and third goals for Liverpool were testament to the value of good team play, then the fourth was an exhibition in the importance of individual brilliance.

Mane had little angle to work with when he received the ball on the right, but simply slipped past two Arsenal defenders with one drop of the shoulder and smashed a shot into the top corner with his left foot.

The celebrations saw the typically enthusiastic Klopp get involved on the sidelines, but the manager will have been none too impressed by the manner in which the Reds gave their opponents hope soon after.

Oxlade-Chamberlain found it too easy to cut in from the left past a string of defenders and fire in a low shot that Mignolet could not keep out just a minute after Mane's goal.

Chambers then nodded in an inswinging free-kick delivery as Wenger's team rallied in front of an increasingly vocal home support.

Thankfully, their efforts weren't sufficient to rattle the Reds, who held out to record just their second ever victory at Emirates Stadium.

Can't wait to watch the Reds at Anfield this season? Click here to snap up one of our hospitality packages, with only a limited number still available.