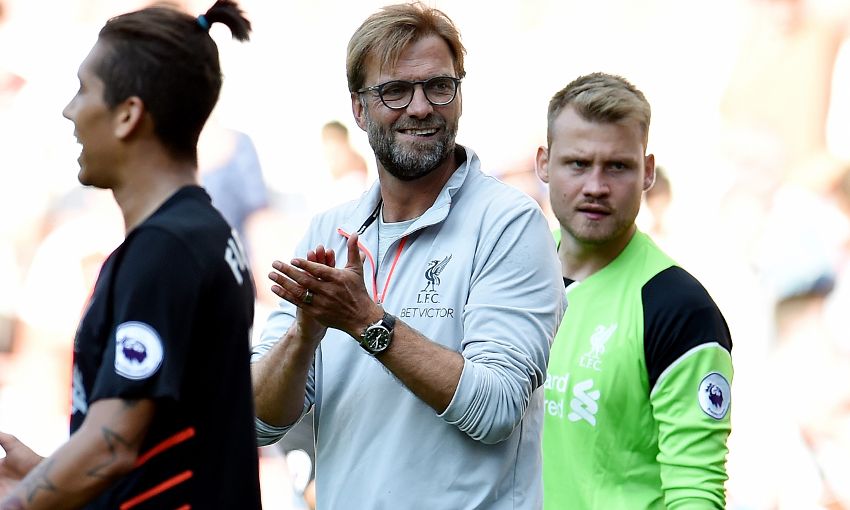 Liverpool's 4-3 win at Arsenal to kick off the season left Jürgen Klopp feeling brilliant but the manager insisted that his team did not show their whole quality at Emirates Stadium.

In a game that had almost everything, a brace from Philippe Coutinho and strikes by Adam Lallana and Sadio Mane secured three points for the Reds in their Premier League opener.

Theo Walcott had a penalty saved by Simon Mignolet but broke the deadlock seconds later, while Alex Oxlade-Chamberlain and Calum Chambers goals threatened a comeback.

But Klopp could reflect on a satisfying victory at his post-match press conference and the boss explained why there are still areas to sharpen up in the weeks to come.

Read on for his thoughts in full…

On his overall reaction to Liverpool’s win…

Scoring four goals is wonderful, conceding three is the opposite of that emotion. We didn’t start well in the game. I saw what we spoke about, but I saw we did it with 50 per cent of being convinced about what we had to do. We had a high formation, but not a compact formation and that meant it was much too easy to play football between our rows in the spaces we gave them. The formation we chose was to close spaces, but what we did was [have] open spaces. That makes absolutely no sense and they [Arsenal] felt better and better and better and we [felt] not very good. We asked for the goal [against] and we got it. Then we came back in the game, had more direction and were even more compact. This was a really intense game for both sides and Arsenal made something like a little break in their game. We used it for being more of a threat to them. We needed 45 minutes-plus to get the free-kick and it was the genius of Phil [Coutinho]. At half-time, I was really happy about having it because we could speak about everything and it was clear – our mistakes were so big so it was easy to speak about them because the players already felt it, but couldn’t change it in the game.

We changed our way of defending and we showed and told them where the spaces were, where we could go. Arsenal were better in the first half, of course, but the goal and the penalty was after we’d lost the ball. When we had good orientation, used the wings and used the width of the pitch, Arsenal had to run and today it was really difficult to do this for 90 minutes. We came out, scored wonderful goals and then I made a big mistake as I was involved in celebrations – that will happen one or two times in my life hopefully, but not so early in a game because it was the wrong sign for all of us. It felt for everybody in that moment ‘that’s it’ but then you have a look at the watch and see there’s still half an hour to go and that’s not too good. Arsenal fought back, showed character, scored the goals, we defended not so good, but then after their third goal we were back in the race and compact again. We could change three players and the first two [substitutes helped us be] better in the deep space. We unfortunately did not really have counter-attack moments, which would have helped a lot, so there was pressure but not the highest pressure from Arsenal – I cannot remember big chances apart from the goals. So, it was hard work but a deserved win in the end. It feels brilliant at the moment, actually.

What does this result tell us about the title chances for either team?

I told my players at half-time there’s no reason to be hectic in our game, but obviously here it’s a little bit hectic! It’s the first game and you ask about this? [I’ve] no idea, actually. It’s a little bit like our behaviour after the 4-1, or my behaviour. If you celebrate too early, life always gives you a knock – that’s fair. I don’t think anybody should think about what’s at the end of the season in this moment.

Sadio Mane was one of the brighter spots, even in the first half, what did you make of his first 90 minutes?

Good, good, good, but he can do even better. The way we defended, they were all involved, Sadio too. We need to defend better and he’s involved, but of course we saw in the pre-season and we saw today that in specific moments he is unbelievably strong. Being technically good and quick is a nice combination, so that’s what we saw in the game and around the goal. It’s absolutely too early to talk about single players because I have to analyse and the game was intense for all of us. We made our mistakes together and we scored wonderful goals, that’s really important. It gives us, on the one side, the confidence and the knowledge that we can score goals – that was clear before this game. And on the other side, there’s no alternative [but] to defend together, only then do you have a chance in the Premier League. 4-3 is obviously a spectacular result, but it’s not a result you want to have a lot of times in the season. When you are good enough to score four goals, then you need to avoid [conceding] three.

When you saw Arsenal’s defensive pairing [was] very inexperienced, did you see an opportunity there to score goals?

What an idiot I would be if I thought like this. They played really well in the first half, they did really well, and I have no idea if they were really involved in our goals. First goal, for sure not; second goal, a pass in the box and Lallana free – I didn’t think for a second about the centre-half pair of Arsenal.

You talked about the need to improve, will that be with signings or with the players you’ve got?

We will see! I think we will try it with training and analyse things. I said it a few times but it was in Liverpool and we are in London so maybe you didn’t hear this. I said, until August 31, why should I decide anything? We have time and we will see what happens and injuries can always happen, unfortunately. But improvement in my understanding is about training and using the quality you have. We were far away today from showing our whole quality but we showed a few nice signs, a few not-so-nice signs, that’s all. Let’s carry on.

What was Coutinho’s injury?

Watch Klopp's Reds in action at Anfield in style this season with our hospitality packages. Click here for details.