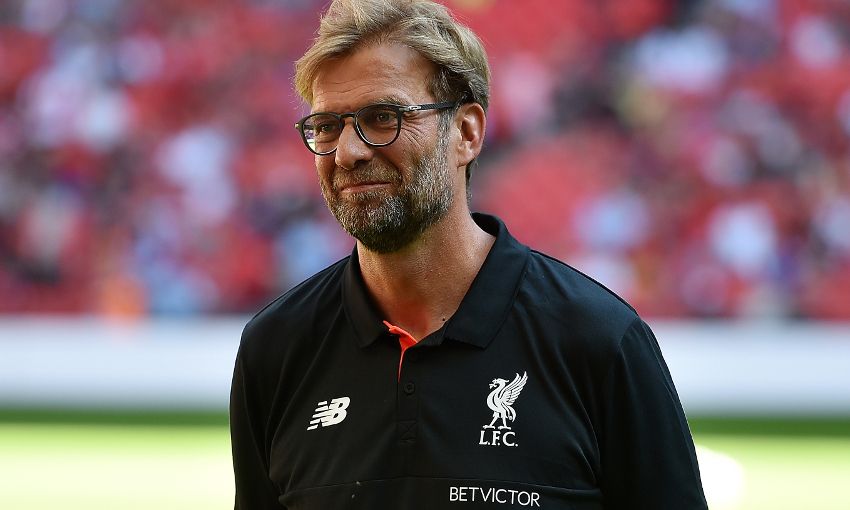 Jürgen Klopp reflected on a good day at the office after seeing his Liverpool team defeat Barcelona 4-0 at Wembley Stadium on Saturday afternoon - read on for a transcript of the boss' post-match press conference.

Jürgen, you must be delighted with your team today?

Of course I'm happy with the result and a lot of parts of the game. Most parts on the tactical side. Always when we were active we were really good and when we were defending, our passing game after winning balls, our direction - great football, good build-up, we played between their rows and in the half-spaces and it was all good. But we saw then that after 30-something minutes in the first half, we became a little more passive and we needed a bit of luck when they hit the post, and one time Dejan and one time Simon, but that's football and of course that can happen against Barca so that's not a big problem.

What will a 4-0 win over Barcelona do for your side?

I could be sitting here today when we had lost 4-0. Life would have not been that nice as it is at the moment, but [it would be] useful too because of the things you can learn. But it was Barca, it was a friendly and a lot of things can happen. If they start playing then it's pretty difficult to defend. But of course when you win 4-0 you have to use it. It was wonderful today, special - 90,000 people here for a friendly game and they could enjoy the game. I would say 98 per cent of what happened today was really great.

What are your aims for this season and is Champions League qualification a realistic target for Liverpool?

I don't know, we will see. I think we should fight for everything but if anything I could say now would help, I would say it, but unfortunately most of the things I could say wouldn't help. You can be sure we will fight for everything and we need to be ready for everything. We have a year without European football so we know [what] we're working for. We have, if you want, pressure, but it's more that we're really ambitious and we want to win as many games as possible. And then we will see what happens at the end because they are all ambitious around [us] and it will be a quite interesting league. If you are not involved, I'm pretty sure it's a big joy to watch it. We have to fight and I know we will be ready for this but, at the end, I don't know now where we will be at the end of the season.

Were Barcelona as bad as the final result suggests?

No, of course not. Barcelona were not bad, are never bad. I think we did really well around the goals especially, and in one or two situations we needed a little bit of luck to defend, it's clear. Barcelona start one week later in the season, that's a difference in pre-season always. Obviously, for us, it was a more important game because 90,000 were here because of us - and Suarez and maybe Messi - but they were here because of my team. So we had a little bit more pressure but maybe we were a little bit more motivated. It's a friendly game and I don't want to overestimate this game but it's still good for us. We didn't think before the game we are one level with Barca and we don't think after the game we are on a higher level than Barca - we are not crazy. But the only job to do today was to play football as good as possible and we did it, and I've no idea how good Barca can be but I'm pretty sure better than today.

After pre-season do you have a clearer idea of the team you want to put out against Arsenal?

No, of course not, how could I? I have an idea about my squad and for me that's much more important. Today, a lot of players played really well and hopefully they do it tomorrow again - or different players will play like we did today. Then we have one week's time and I think we should use the time, always. I never in my life made a decision about the line-up one week before the game because experience teaches you that everything can happen. We will have 11 very good players on the pitch against Arsenal and we will have a very strong bench, I'm really sure. But at this moment I have no idea who is where.

How happy with the squad are you? Do you expect more business?

I'm happy with the squad but then on the injury side if something happens we have to react, that's how it is. We have a few more players than you can bring in a line-up, that's true, but we already have a few injuries in positions that are not too good for us. We have to keep our eyes open, that's absolutely clear, and we will do this. Until August 31, [as long as] something is possible for us, why should I say it's over? We have the possibility to react if we need to and that's what we will do I'm pretty sure.