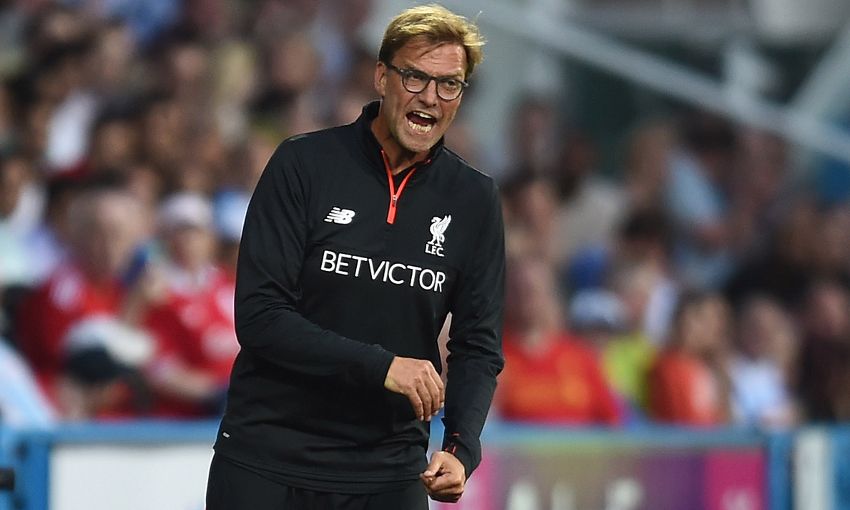 After watching Liverpool defeat Huddersfield Town 2-0 on Wednesday evening, Jürgen Klopp reflected on another successful pre-season outing, the efforts of stand-in outfielder Shamal George and the club's upcoming trip to the United States - read on for a full transcript.

No goals conceded, 10 scored so far in pre-season - happy with that?

This game was different. In the first half we should have scored more - maybe we [did] score more with the second goal disallowed and then we missed a penalty and had a few chances. We played some wonderful combinations so it was really good. But I was not too happy with the first 20 minutes, with the concentration level we showed. It's not bad, of course not: when you are 1-0 in the lead against a Championship side then it's not bad. But if we trust a little too much in our skills, it's not the best decision to make. The second half was a little bit lively and we were under pressure. Then, unfortunately, the injury of Lucas [meant] we changed the formation to have Shamal as a striker - he did wonderful - and we scored a second goal. That was OK, but defending a little bit deeper we had to do it, and it was really hard for the players.

Whose idea was it [to bring Shamal on]?

They told me from the bench after I'd organised the system with 10 [men] and they said, 'Come on, we have Shamal!'

Alberto should have given him the penalty at the end there, shouldn't he?

Even though it doesn't look like it all the time, for us these games are quite serious, so we don't want to make a joke of it! It's nice for the crowd but in no game in the world should we make funny decisions. If it's 4-0, 5-0, we can think about it, but even then it's a lack of respect for the opponent.

Will the training strategy change in America compared to the home friendlies? These seem to have been treated as warm-ups, whereas you'll be playing better opposition in the US?

No, it's a good chance for us to bring our two groups together. Some have trained for three weeks, four weeks, five weeks, one week - so it's difficult to bring our fitness levels together. In our first friendly game in the US I think we'll have 15 or 16 players who could play 90 minutes then we'll see how the English boys, the Welsh boys and so on are and make a decision. The coaches will have a lot of work with the different groups in how they play and train, but that's how it is, it's no problem. That's the good thing with a training camp, you have nothing else to do. We've organised it very well so we can be fully concentrated on the things we have to do.