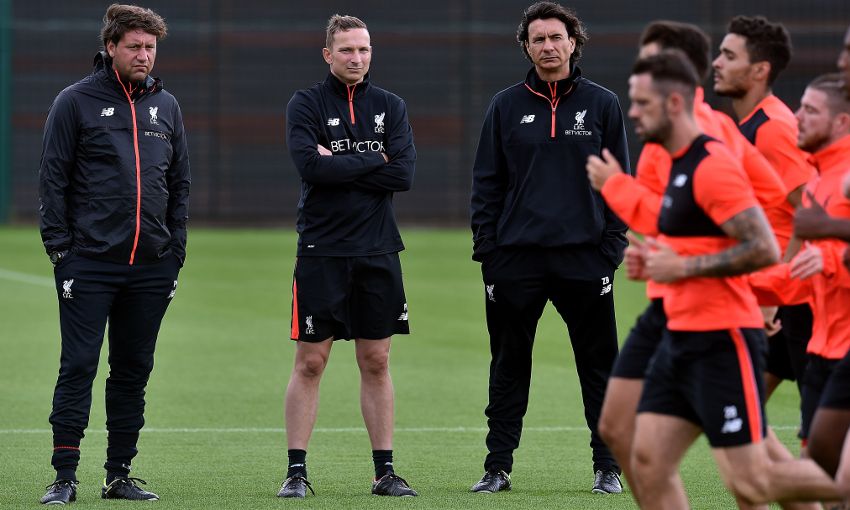 The gruelling work Liverpool’s players and staff are putting in on the Melwood pitches during their pre-season training programme will provide the squad with a solid fitness base to help them try and achieve their goals in 2016-17, according to Peter Krawietz.

The Reds have been getting put through their paces at the club’s West Derby complex since July 2 - often with multiple sessions and coupled with friendly matches against Tranmere Rovers and Fleetwood Town.

Wigan Athletic are next up on Sunday, Krawietz feels this stage of the campaign is vital to ensure the players are ready for the rigours and demands of a long season ahead, even if it can feel particularly arduous at times.

The second assistant coach told Liverpoolfc.com: “We’re in a phase where we try to build the base for the rest of the season.

“It will be a long season, we know that, because there’s no break until the end of May. We know we have to do nearly everything we need on the pitch, and therefore we train a lot – we train long, we train hard and we train often.

“We have to build the base for the physical shape; we have to try to improve our style of play in defending and offense. We have a lot of work to do and it is very, very important, of course.”

He was joined by Zeljko Buvac, while Andreas Kornmayer has since been added to the backroom team this summer, moving from Bayern Munich.

The fact the coaching staff now have a full pre-season programme to work with and shape the players will be hugely beneficial for Liverpool, believes Krawietz.

“You can never influence the results, but we see what we did last year – we want to use this,” he said. “We want to use all the good things. But nevertheless there are a lot of things we can improve.

“With the time we have now, more time for training, it’s very important for us because we believe in training and we believe it’s possible to develop a team. This is what we want to use.

“Hopefully soon – though nobody can say how quick it will be – we will see results and perhaps better results at the end of the season. We will force our development.”

Part of preparing the squad for the new season involves the use of video footage as Krawietz works with the club’s analysis team to examine each individual player’s performance in both training and matches.

“We have a few ideas about how we want to work; of course, you always have to adapt to the situation,” continued the German coach.

“We will have a look every day and in every session at each player, as much as possible. And we want to use video analysis, to speak with the players, work with them on and off the pitch and give them our opinion if we think it is helpful. We try to make each player better.”

So, do the players take on board the advice?

“Of course and it should be like this – it is like this,” Krawietz replies, emphatically. “We are really optimistic.

“We see development and this is what we want. We’ll see the result at the end. It’s very important for us that we really see that a player wants to improve and is ready to try what we give him in his development.”

Earlier this month, Krawietz joined Klopp and Buvac in signing a long-term contract extension with Liverpool.

He admits moving to Merseyside two months into last season meant there were some difficulties in fully implementing their ideas and philosophies from the off, but is optimistic this summer will allow them to do just that for 2016-17.

Krawietz explained: “We knew this when we came but of course it was different. We had to take things like they are.

“We had to learn about the club and learn about the players and the team, their shape and what they can do. It wasn’t easy for us but we were very happy; we met a great club, a good team and great guys with a good mentality.

“It was OK. It wasn’t easy but it was really OK to start to work and make developments.”