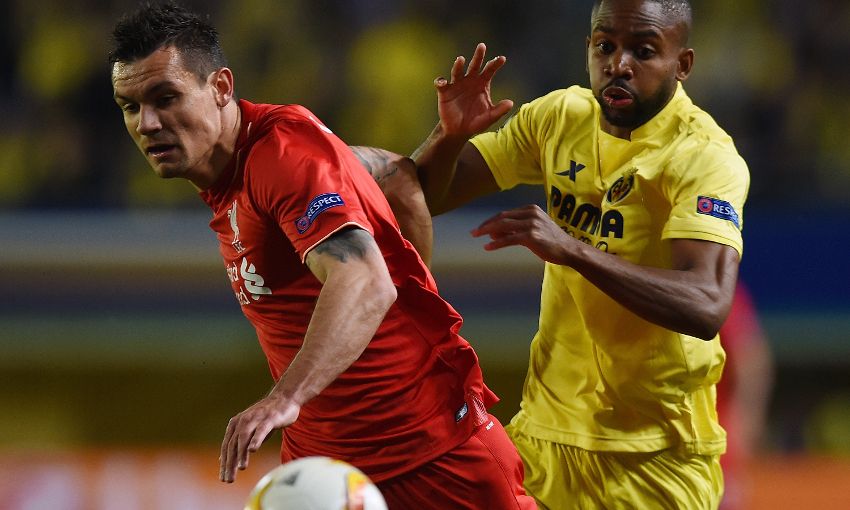 Liverpool suffered a 1-0 defeat to Villarreal in the first leg of the Europa League semi-final in Spain on Thursday night courtesy of a last-gasp strike from Adrian Lopez at El Madrigal.

The substitute scored right at the end of a contest which had been dominated for long periods by the Reds when he swept in Denis Suarez’s pass across goal when one-on-one with Simon Mignolet.

It means Liverpool will need to beat the La Liga side at Anfield in next week’s return leg if they’re to progress to the final in Basel.

Jürgen Klopp made three changes for the fixture as Nathaniel Clyne, Philippe Coutinho and Lucas Leiva returned. Roberto Firmino was tasked with leading the attack, with Daniel Sturridge on the bench as well as the fit-again Christian Benteke.

Despite the prize at stake over the course of the two legs, there was no tentative opening to the contest in front of a lively sold-out crowd at El Madrigal.

Indeed, Jonathan Dos Santos tested Mignolet early on with a long-range effort; however, it was the Reds who should have taken the lead with five minutes played.

Adam Lallana’s cross into the middle was deflected into the path of Joe Allen’s run from deep into the area. The Welshman elected to sweep goalwards first time, but it was straight at Sergio Asenjo and the ‘keeper was able to save.

The pace of the contest remained high and soon after, former Spurs striker Roberto Soldado threatened when he latched onto a quickly-taken free-kick and bounced a half-volley across the face of goal and wide of the far post.

Lucas and Lallana both then watched efforts fly wide of target from outside the box, before Tomas Pina’s powerful low drive was thwarted by the palm of Mignolet.

Next, a magnificent block from Dejan Lovren inside the box foiled Mario Gaspar after his initially-attempted cross had been deflected back into his path in a dangerous position before Soldado clipped one just wide of the upright from distance, ending an entertaining first half without a goal.

Liverpool made a change at the break with Jordon Ibe replacing Coutinho – and they nearly found themselves behind within a minute as Cedric Bakambu glanced a header against the outside of the post from a corner.

The visitors were dominating the ball, however, and on 65 minutes carved open their best chance of the game.

James Milner’s disguised pass picked out the unmarked Firmino inside the box, and he swivelled before crashing a shot towards the near bottom corner, but Asenjo was able to get a glove to it and push the ball onto the base of the post.

The Reds continued to probe in search of an away goal to take back to Anfield, but had Mignolet to thank for producing a stunning save to deny Bakambu with just minutes remaining when the Villarreal striker surged into the area.

At the other end, Alberto Moreno demonstrated exceptional speed to race more than half the length of the pitch, but he could only blast wide of the top corner.

And it was a night that was to ultimately end in frustration for Liverpool as Lopez applied the finishing touch to a counter-attack to give Villarreal the advantage at the halfway stage of the tie.