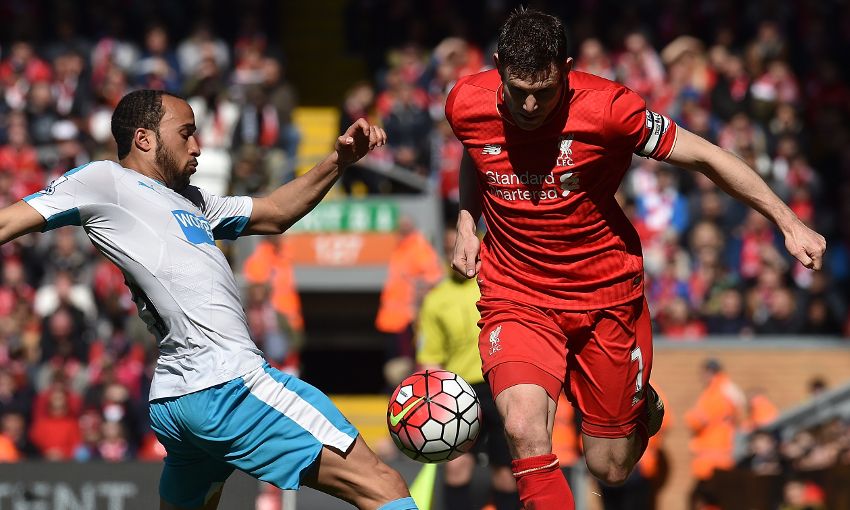 Liverpool let a two-goal half-time lead slip as they were held to a 2-2 draw by Newcastle United at Anfield on Saturday afternoon.

The Reds had put themselves into a commanding position to take all three points when Daniel Sturridge’s goal inside the opening 60 seconds was added to by Adam Lallana midway through the first half.

However, the Magpies fought back following the break on Rafael Benitez's return to Anfield, with Papiss Cisse’s close-range header pulling one back before Jack Colback ensured the points would be shared when his deflected strike found the net.

Jürgen Klopp elected to make five changes to his starting line-up for the clash as Sturridge, Joe Allen, Connor Randall, Kevin Stewart and Kolo Toure all came back in.

With Anfield bathed in sunshine, the Kop began the contest by singing the name of Benitez, who was making only his second return to the stadium as an opposing manager since leaving the club in 2010.

But within 60 seconds, supporters had something else to cheer as Sturridge gave Liverpool an instant lead.

Collecting Alberto Moreno’s ball forward, the striker held off the attentions of two Newcastle defenders before swivelling and sending a low drive into the far corner.

Sturridge was next to threaten on 17 minutes, dipping an effort narrowly over Karl Darlow’s crossbar from 20 yards.

A second did arrive on the half-hour mark and it came courtesy of a wonderful finish from Lallana.

Picking up Moreno’s square ball across the edge of the area, the playmaker took a touch to set himself before dispatching into the top corner – the 50th league goal of Klopp’s tenure.

Liverpool were by now in complete control, and only a fine block from Chancel Mbemba denied Roberto Firmino from adding a third after he’d sublimely turned inside the box.

If Liverpool could not have wished for a better start to the first half, then their opening to the second was precisely what they didn’t want as their advantage was immediately reduced.

Vurnon Anita scampered into space on the right and swung a centre towards the back post, which Simon Mignolet was unable to cut out, leaving Cisse to nod into the net.

The Newcastle No.9 threatened again moments later as a counter-attack saw half-time substitute Georginio Wijaldum release him into space inside the area; however, Mignolet and Toure were able to hold him up before Andros Townsend curled his lay-off over the bar.

Liverpool’s riposte saw Allen’s header from Milner’s cross brilliantly clawed away by Darlow. Firmino did hook the rebound home, but was flagged offside.

Then, on 66 minutes, Newcastle restored parity. A counter resulted in the ball being worked to Townsend on the right, who charged into the area and delivered into the centre. The ball was laid-off into the path of Colback, whose first-time strike took a deflection off Dejan Lovren to beat Mignolet.

Klopp introduced Philippe Coutinho and Lucas Leiva into the action shortly after, with Randall and Allen making way.

And Liverpool pressed in an attempt to restore their lead and Sturridge had a glancing header saved by Darlow and Coutinho watched as a goal-bound drive was deflected away by Anita.

However, they were unable to muster a third goal, ensuring Newcastle returned to the north east with a point.