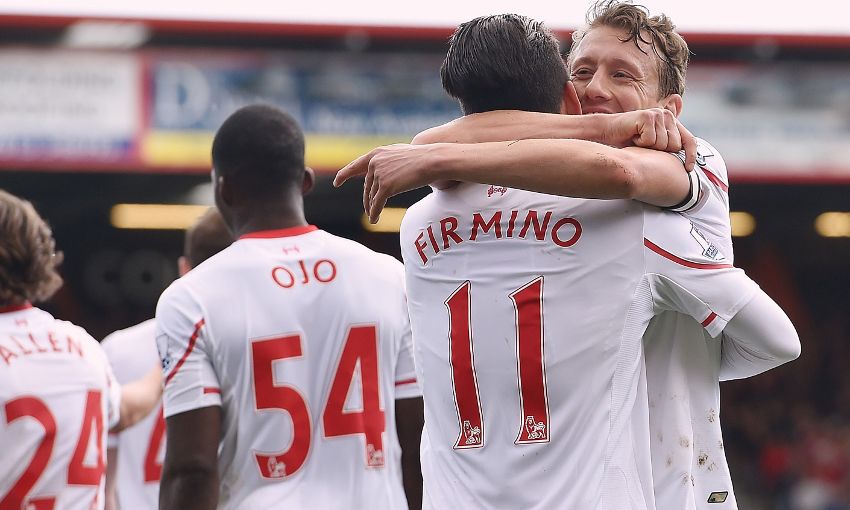 Recap: Bournemouth 1-2 Liverpool - how it happened

Liverpool kept their push for European qualification on track with a 2-1 win over Bournemouth at the Vitality Stadium on Sunday.

The Reds aided their chase in the Barclays Premier League as they collected three points thanks to first-half goals from forward duo Roberto Firmino and Daniel Sturridge.

Debutant goalkeeper Danny Ward also played a large part in the visitors keeping the Cherries at bay, making several outstanding saves across the course of the afternoon, but he was denied a deserved clean sheet by Joshua King's late consolation strike.

As well as contributing to an entertaining contest on the south coast, Bournemouth showed their class prior to kick-off with a touching tribute to the 96 victims of the Hillsborough disaster, with a wreath laid in front of the visiting support as 'You'll Never Walk Alone' rang out.

Jürgen Klopp made 10 changes to the team that completed an unforgettable comeback against Borussia Dortmund on Thursday, with Firmino the only man to retain his place.

And the Brazilian was heavily involved in the Reds' first chance of the half, as his pressing fashioned an opening for Sturridge to shoot, though the striker's low effort was well saved by Artur Boruc.

Bournemouth evidenced their threat soon after, with Steve Cook heading over at the back post before Matt Ritchie dragged a shot just wide after working space at the edge of the box.

Ritchie then created the hosts' next opportunity, sending in a delightful cross for Tommy Elphick to head at goal.

Thankfully, Ward was on hand to make the stop.

A period of pressure from the Reds followed, with Sheyi Ojo seeing a shot blocked after bamboozling two defenders, and a fortunate cannon off Sturridge forcing Boruc to save.

Liverpool's endeavour was then rewarded in the 41st minute when Sturridge collected Jordon Ibe's cross in the box and sent a backheel at goal.

Boruc's subsequent stop was an impressive one, with the Pole at full stretch to keep the ball out, but he could not prevent Firmino from tapping in on the follow up and putting the visitors ahead.

And things got even better for Klopp's men just before the break, as Ibe sent in a self-won free-kick and Sturridge rose highest to nod into the far corner.

The No.15 almost doubled his tally for the day with seven minutes of the second period gone, as he latched onto Joe Allen's through pass after the Welshman had won the ball high up the pitch.

However, his delightful dinked effort bounced agonisingly wide, clipping the post on its way to safety.

Bournemouth responded well to that let-off, and were claiming for a penalty on the hour mark when the ball bounced up onto Kolo Toure's arm in the box.

The Cherries then fashioned a great chance on the counter but, after King cut inside Lucas Leiva, his shot was well kept out by Ward.

The young goalkeeper pulled off an even better fingertip stop moments later when he looked to have been beaten by a deflection off substitute Mamadou Sakho but somehow reached up to keep the ball out.

And the Welshman's memorable debut was capped off in fine style with 10 minutes to go, as he kept out Lewis Grabban's header with an improbable reflex save low down to his left.

Sturridge was unfortunate not to make the game safe in the counter that followed, with the No.15 cracking a shot off the bar after good work in the box.

But there was still time for the hosts to pull one back, as King controlled on his chest in the box before drilling the ball beyond Ward in injury time.