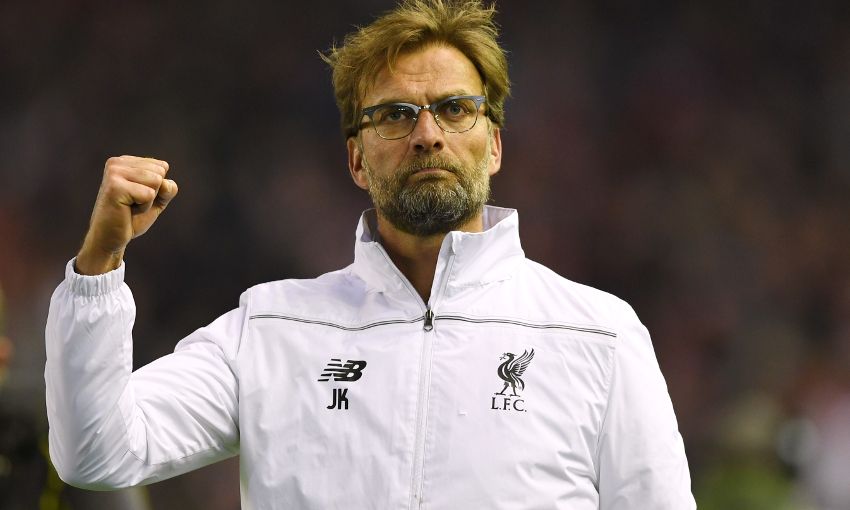 The Reds recovered from 2-0 and 3-1 deficits to overcome the Bundesliga side 5-4 on aggregate in their quarter-final tie, with Dejan Lovren heading home a stoppage-time winner in front of the Kop.

After BVB had taken command of the game with goals from Henrikh Mkhitaryan and Pierre-Emerick Aubameyang, Divock Origi netted but Marco Reus re-established the visitors’ advantage.

However, Philippe Coutinho, Mamadou Sakho and then Lovren struck in the final 30 minutes to seal an historic comeback for Klopp’s charges and spark unforgettable scenes inside Anfield.

In his post-match press conference, the manager offered his reflections on an epic contest: "I saw the game, I saw all the different moments in the game and I thought from the first minute we were in the game. The problem is that after four minutes, we lost the ball in a not so good moment. The counter-attack of Dortmund is in some moments not to defend anymore, to be honest, and that’s what we saw after four minutes, [and] after nine minutes.

"Very often in football life, a game is over [at 2-0] – but not here, not with this Liverpool team and that’s great to be part of. In the first half of the game, we created a lot of chances, we didn’t score and then it was really, really difficult to stay in the game because we are all human beings – we tried everything but nothing really worked.

"At half-time, there was a good atmosphere to be honest because I was satisfied with the game – not with the goals, but with the game in general. I told the lads, I was not there but a few Liverpool players who are a little bit older and work now as experts for television, they were 3-0 down at half-time but won a Champions League final. So even when it’s not really likely, it is for sure possible and we should try it.

"They did it and made it 2-1. I think even before 2-1, we had a chance and two or three really good moments but didn’t score. Then we scored and then everyone could see something happen in the stadium. You could feel it, you could hear, you could smell it… But then there was a brilliant, brilliant attack situation [from Dortmund]. It was not too good defending from our side, to be honest, but it was brilliant play from Dortmund and 3-1.

"Then that was the moment in football – and in life – when you have to show character. That’s what the lads did and it was pretty cool to watch. In the end, to come back in a game like this against this highest quality opponent and to win, you need a little bit of luck, but I think everybody who was part of the game, who saw the game, has to say at the end it was deserved.

"We had more bad moments in the game, we had to react more often in difficult, difficult things in the game, but then to score the fourth goal it was strange. It was a long time before I was sure the ball was in – but obviously it was until somebody tells me something else!"

Though Klopp referenced the legendary scenes at the Ataturk Stadium as motivation for his players at half-time, the boss was eager to play down any direct comparisons with that night in Istanbul and what occured this evening – particularly as Liverpool are still three games away from winning a European trophy.

"The players did it, it was not the team of Istanbul," he said. "It’s easy to say it. I’m a football fan so I saw the game [in 2005] and to be honest at half-time I did not think, 'Oh it looks like Liverpool will strike back'.

"I only told them that it’s possible, but it’s much more difficult to do it than say it. They showed that they have potential, real potential, and I’m completely happy.

"Forget the story about 'these could be heroes' – give us the time to play the semi-final against probably a really strong [team]. They are all pretty strong so we don’t need to compare this. This, tonight, was brilliant in itself."

The manner in which events unfolded at Anfield will mean the clash with Dortmund will be firmly forever etched in the club’s folklore.

It will rightly go alongside some of the heroic continental nights the famous stadium has witnessed in its long and illustrious history.

Still, Klopp insists his Liverpool team are only just beginning their journey.

"I know this is a place for big football moments, [but] we didn’t start this story, there were other people," he explained. "But we know about our responsibility to try to write a few nice stories in football and tonight it was a really nice story.

"I can’t believe when some people say [this is] the only chance for us to go through to the Champions League – it’s not one second we thought about the Champions League through the Europa League because we have to do all these steps. We try to really take everything we can get out of this season and I see that we always tried.

"That’s really cool and now hopefully we have enough players for Bournemouth, then Everton, then Newcastle, then the semi-final, then I don’t know."

He added: "We played a brilliant game and now, 100 per cent, we will get a real strong opponent in the semi-final, so we will have to be there again – everybody, as fit as possible, to try it again.

"For tonight, it was brilliant, outstanding, wonderful, emotional… Everything. I will not forget it because it is special, but now we have to carry on and try to do things like this more often."

Klopp also reserved words of praise for the atmosphere generated by Liverpool supporters inside Anfield – and outside after the team bus was greeted by thousands of supporters prior to the game.

Even at 2-0 down, the Kop delivered a rendition of ‘You’ll Never Walk Alone’ during the half-time interval to show the players they were still firmly behind them.

Klopp said: "It was an outstanding atmosphere and what I said [was that] we need experiences like this to grow together, that’s how it is. So now we have something like a milestone, or whatever you would call it, and that’s good – that’s really good.

"Before the game, when we went down the stairs, all my Dortmund friends asked me, 'Do they all touch the This is Anfield sign?' I said no. I don’t exactly know how it works but I think you need to win something before [you touch it], I didn’t ask until now, but it’s a sign of respect that you don’t do it, it’s too big.

"Maybe these players one day are allowed to do it and feel better, stronger, and can use this emotion. Tonight was very emotional – cool!"