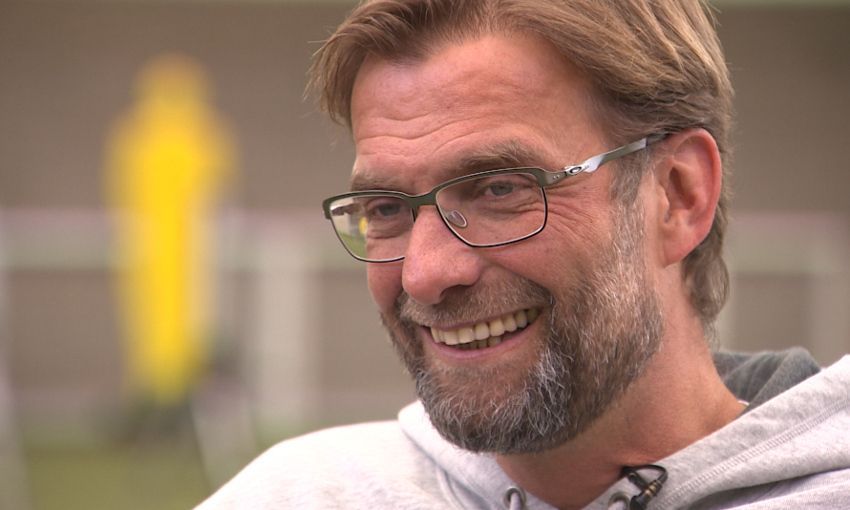 From Moenchengladbach to Cologne: Kop 10 wins over German sides in Europe

Ahead of the mouth-watering Europa League clash with Borussia Dortmund on Thursday, Jürgen Klopp sat down with Liverpoolfc.com to preview the quarter-final, second-leg tie.

The contest is finely-poised at 1-1 after last week’s initial meeting in Germany, although Divock Origi’s strike has given the Reds a slight advantage with the away goal.

Klopp believes his side go into the encounter in high spirits after the weekend’s 4-1 win over Stoke City at Anfield, but outlined the role supporters will have to play against the Bundesliga giants if his men are to progress into the last four.

If you’re an LFCTV GO subscriber, you can watch our chat with Klopp in full now by clicking play on the video below. Need a subscription? Sign up now. Alternatively, read on for a full Q&A…

Jürgen, following the result and performance at the weekend, you must feel as though you’ve set yourselves up in the best possible way for Thursday…

Yes, of course. With the things that have happened in this season, anything could have happened, to be honest [as] we tried a lot of things. We’ve had a few really brilliant performances and a few not so good performances – most of the time it was because the intensity of the season has been so high and we had no rhythm. [On Sunday] we brought in a team with no rhythm, but everybody could see now they’re fit in a physical way, that helps a lot. We were a little bit surprised about the way we played. It was really close to the plan we had before the game, but as a manager you’re used to having a plan but not seeing it on the pitch! I enjoyed the game and afterwards I thought, ‘that’s what I thought when I had an idea for the game’. It was really good.

Daniel Sturridge and Divock Origi linked up really well and other players stepped up to the plate. It shows you’ve got options for Dortmund and beyond. Is it even harder to pick your team for Thursday?

No, in the end it’s not hard – it’s good. It’s good to have different options, but I don’t like to talk too much about it. I’m really not superstitious, but always this season when we’ve spoken about a comfortable squad situation, the next day we didn’t have a comfortable squad situation anymore. But in the end, hopefully we have all of these players fit and available and then we will make a decision for Dortmund, for Bournemouth, for Everton and then Newcastle. There are a lot of games to play and hopefully a further three more than we have at this moment – and we will fight for this on Thursday. It’s easy to look forward to it because with the result from the first game, it’s clear the atmosphere will be outstanding, so hopefully we can really play a good game.

Things seem to be coming together at Anfield – it was the biggest Premier League home win in a year and half against Stoke – and you mention the atmosphere, the roof will no doubt come off on Thursday. How much are you enjoying your Anfield experience at this moment?

It’s more my Liverpool experience, to be honest. It’s clear that all the things need time and I don’t have the feeling we have reached something until now, but what kind of manager would I be if I could see absolutely nothing of the things we are doing in training? Of course, we know a little bit about football and it’s really nice to see a few things now coming regularly on the pitch. That’s really cool. The Stoke game was real proof of this – that training works, that time together is useful. That’s what we’ve always said before, but in professional football – especially in England – nobody wants to hear it. For us, there is still a long way to go – not only this season, but hopefully in a long, common future. There are a lot of things to improve, but the first steps are dpne, everybody can see it and that’s really cool. 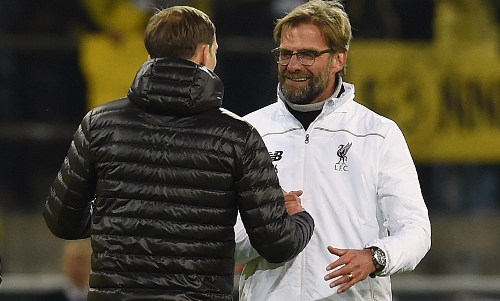 The first leg against Dortmund was an incredible experience for everyone that was there and everyone that was watching, but there was so much focus on your return. This game is slightly different so do you think the media will focus more on the game?

Hopefully. I don’t know, we will see. I have been a professional football manager for 16 years now, and I know all around the games what you have to do, but I don’t like the press work or media work – but I do it because it’s part of the job, it’s part of the team, it’s not a problem. It’s always about the game but sometimes it’s a little about something special, about a player or whatever, but not really often about myself because I don’t play – which is good and the best news for everybody! But in this case, when I went there [to Dortmund], I only met people I like but I had no time. If I would have had time, I could have spoken to them and it would have been absolutely no problem because I can stop after the talk and play football. I can play tennis against my best friend, against my son, against my wife and if we play, I want to win – that’s easy, it’s the only reason we want to play. In football, they are not my family, some of them are familiar and I like them a lot, but it’s no problem – I can make the stops and say, ‘let’s be concentrated on football’.  But it was more difficult than ever before in my life to be honest, but it’s over – that’s good – and the most important thing is we played a really good game against one of the best teams in the world at this moment. That’s not because I want to give them the favourites’ role or something like this, it’s only the truth. I watch them often and most of the players I know, and they've played really good football this year, but we knew before we can be a really difficult to play opponent. For this, it’s not important that you know it, you have to show it. That’s what we showed and I think for a lot of people it was unexpected, they didn’t really think it was possible and I like this in football – that it is always possible. It’s not sure, there is no guarantee, but it is possible and for me that is enough. That’s what we should try again with – and it’s a big difference – the crowd behind us. Hopefully, it will be great.

Does either team have an advantage going into this one or is it as finely balanced as it possibly could be?

We have the small advantage of the away goal. In the Borussia Dortmund side, 80 per cent of their players have played together for three or four years, so we cannot be on this level, it is not possible, but it’s not important – it is more general information, but it’s the truth. That is their advantage. They play a style that makes no real difference whether they play at home or away, they don’t change it. So we know how difficult it is to defend [against], but everybody could see that we don’t give up before a game and that’s very important - we really are ready to fight for the semi-final. We want to go to the semi-final, we want to go to the final, we want to win the final – that’s what we want. It’s not that we have the feeling that we’re already halfway [in the tie], we’ve made the first step and that’s important. On the other side, now they know more about us. We knew before everything about Dortmund, but now they know more about us and that’s good because it’s a kind of respect. It’s not that they didn’t have respect before, of course, but not in this amount. I would say they thought, ‘good team, we know the manager’. But we showed on the pitch, it’s difficult and hard work [against us] and if they are ready for hard work, then we will be ready for hard work and it will be an intensive game – and intensive games you always can win. 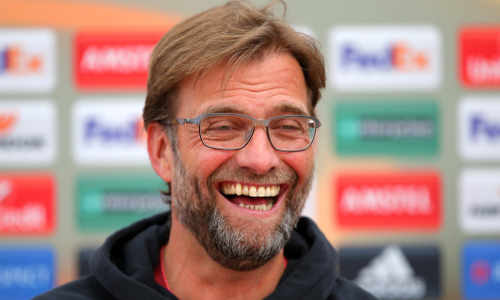 You mentioned the crowd, it seems like an obvious question but how important can they be on Thursday? What role can the supporters play?

Big. For me, they have a really, really big role. I like this, I feel it. I hear what they sing – I cannot understand it, but I hear it! That changes everything. There is a really good example from the last two or three weeks when we played against Manchester United at Anfield and it was the best atmosphere since I’ve been here. That was really great and, to be honest, at Old Trafford it was not too bad too. You saw the difference in the game – you saw the power behind their action, behind our action. It gives faith, it gives trust, it gives extra power – gives everything if you can use it. But the crowd has to be prepared for difficult moments because it’s not [like] at Dortmund when it’s allowed that we defend more than when we attack, for example. At Anfield it is not allowed. If we are smart enough, we don’t change our style of play too much because we cannot battle on the same level with Dortmund. We cannot say, ‘you have the ball, show what you can… Now we have the ball, we’ll do the same, a little bit different but not as finely tuned, but we’ll try the same…’ That makes no sense because we have to bring in our strengths and the crowd has to be ready for enjoying our game, celebrating each challenge. A pressed ball out, why can’t the whole of Anfield stand up and go nuts? Why not? In my dreams it is possible! I think we all deserve a night like this. If you want to win in sports, you need to be ready to lose – that’s how it is, it’s not guaranteed. If we try everything, if everybody is really prepared to give their best – the crowd, the players, the manager, LFCTV – then we have a really good chance. As I said, I am really looking forward to it.