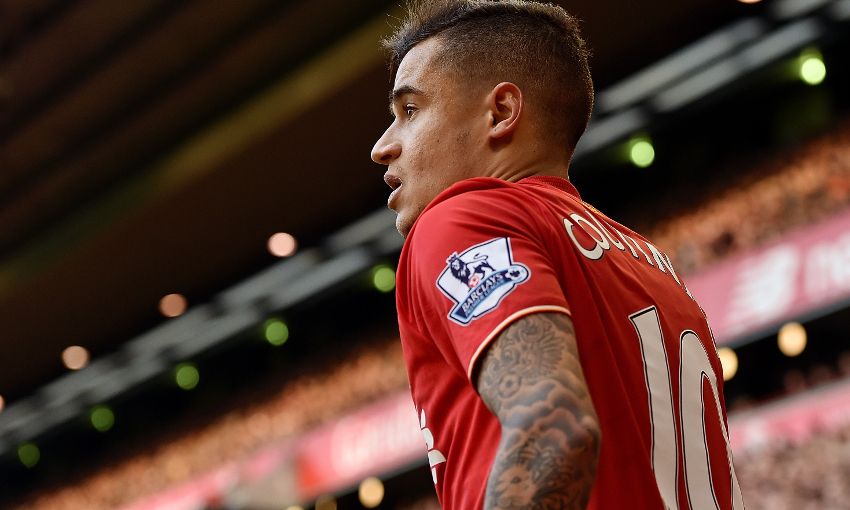 Philippe Coutinho admits Liverpool's form in the Barclays Premier League this season hasn't been consistent enough, but insists the Reds should focus on what can still be achieved in the remainder of 2015-16.

They welcome Stoke City to Anfield this afternoon knowing a win would see them leapfrog Mark Hughes' men into eighth place.

Coutinho is adamant that the whole side are 100 per cent focused on finishing the domestic campaign in the best position possible.

"Of course we could be doing better," the Brazilian told Liverpoolfc.com. "We know that.

"We know the team's quality. We know we should have won some games where victory escaped but we have to think ahead.

"There is no point in dwelling on what happened. Let us think about what we can still achieve and what we are aiming for.

"I am sure this is what the team wants, everybody is focused on going up the table and fighting in the important competitions and that is what we are going to do.

"I have always said that Liverpool has to fight for the title and all the important competitions. We know that we did not start the season well. We did not do our best in some games.

"We are not in a good position in the league but there are still a few games left and we have to fight and I am sure that is what the team is going to do."

Today marks the fourth meeting between the two sides this season.

Liverpool emerged 1-0 victors at the Britannia Stadium on the opening weekend of the Premier League back in August, through a wonderful strike by Coutinho late on.

The Reds then edged out the Potters over two legs in the Capital One Cup semi-finals to reach Wembley.

But the 23-year-old dismisses the notion that his side have an advantage given their success in recent clashes.

"All games are difficult," the No.10 continued. "Stoke are a very good team. They have tall, strong, quality players so it is always a difficult game.

"On the occasion that you have mentioned I scored and we won the game but we know it was a hard, difficult game.

"We have to start the game with the same mentality. We will do what the coach asks so we can have a good game. We will always be searching for victory.

"All Premier League teams are difficult, that is why the league is so complicated. You can see there are no easy games.

"All games are difficult, home or away. All teams are well prepared, that is why the league is beautiful."

Coutinho is urging those heading to Anfield to crank up the decibels in order to help Jürgen Klopp's charges pick up an important result.

He added: "The atmosphere in Anfield is incredible. We know that, everybody knows that.

"The fans' support makes us stronger. The team has been playing well at home. It certainly is important that the fans are with us in the home games so we can continue aiming for good things."