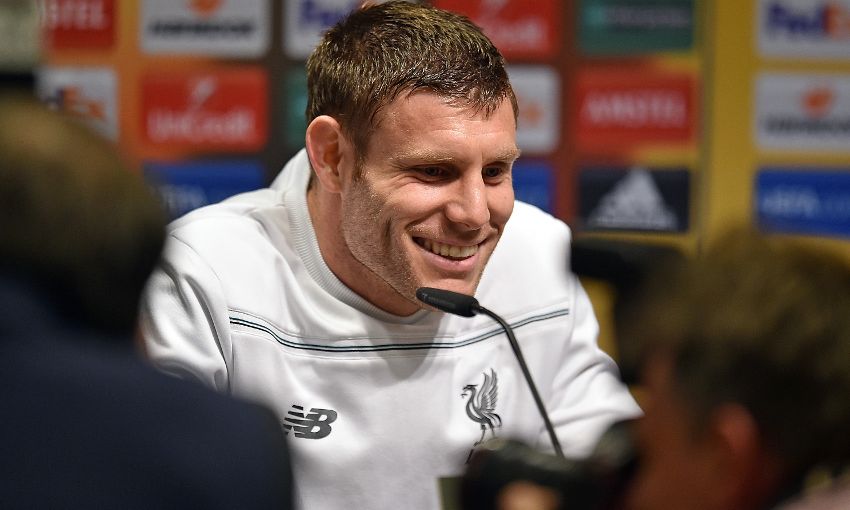 James Milner tackled questions from journalists in Germany on Wednesday night as Liverpool hosted their pre-Borussia Dortmund press conference at Signal Iduna Park. Here's what the Reds' vice-captain had to say in full…

James, you may have noticed there’s a bit of attention on the manager today. How does that affect you as players and also have you noticed it affecting the boss at all?

It makes it very easy for us – all the attention is on him and we can just worry about playing football!

Would winning this competition make the season a success?

I’d have thought so, yes. It’s a great competition to be in. All the teams left in it deserve to be here – they’re top teams. It’s not an easy competition to win and it’s another chance at silverware for us. To win it, you have to beat the best teams and Dortmund are definitely one of those, but we know we can beat anyone on our day as well. As long as we perform to the best of our abilities, it will be a really good tie, hopefully we can progress and get some more silverware for the football club.

You beat [Manchester] United in the last round, but how big of a challenge do you see this game as?

Like I said, everyone deserves to be here and it is only top teams left. We knew whatever the draw it would be a difficult game. They’ve got a lot of good players – a lot of good individuals – but as a team they’re very strong. We have to be on our game, but we’ve prepared well and there are a couple of training sessions before the game and a meeting. We feel prepared already and we’ve still got a lot of preparation to go. We’ll go into the game with everyone knowing what they need to do. As I said, we’re going to have to be at the top of our game – but we’ve shown already this season we can beat anybody. Hopefully we can bring our best football to these two games.

You’ve spent most of your career playing in the Champions League. How does this compare – can it compare?

It is two top teams – two top teams with great European history. If you put this tie in the Champions League, it wouldn’t look out of place. It’s a massive achievement to win any trophy and to win either of the European ones is great. Liverpool has a history of that. Ultimately the Champions League is where we want to be, but it’s another pathway for us [back into it] if we manage to win this competition. It’s very important for Liverpool to be in Europe with the history of the club. The hunger of all the players and the staff at the club [is there] – we came to this club to win trophies and be involved in big games; this is definitely a big game. The hunger is there to go on and win trophies.

What is your take on an away goal? Do you think you have to score tomorrow night, or would 0-0 be a good result?

I don’t think we have to score, but an away goal is always important and helps. 0-0 would be a good result as well. If we can score, it puts us in a strong position for the second game. They’re a top team, but we’ll go out there and try to win the game – that’s the way we play. We’ll be positive, try to stop them playing and try to get that away goal. Ultimately, we’re going out there to try and win the game.