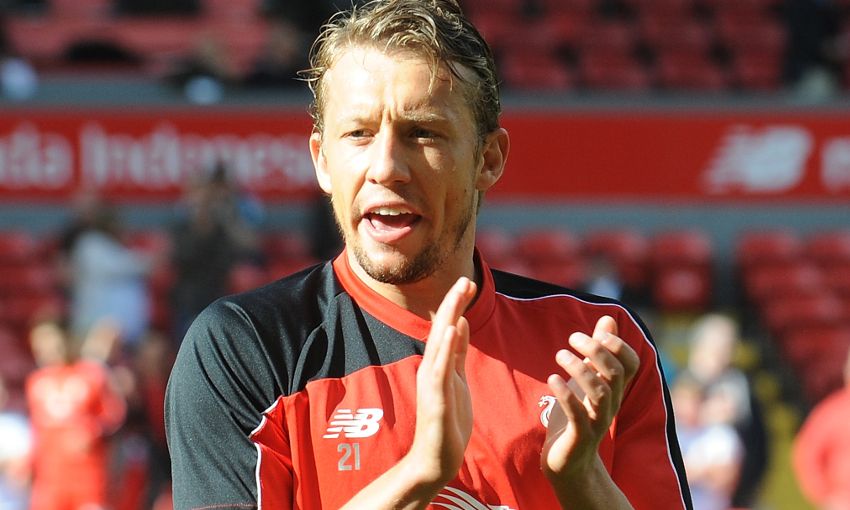 The important games ahead in April give Lucas Leiva plenty of incentive to make a speedy return to fitness – and the midfielder is hoping to be back as quickly as possible.

A quad injury suffered in the Capital One Cup final forced the reliable Brazilian to sit out the past month for Liverpool as they booked a place in the Europa League last eight.

There they will face Jürgen Klopp’s former team, Borussia Dortmund, with the first leg set to be played against the Bundesliga side in Germany next Thursday.

The return meeting is at Anfield a week later and Lucas is working hard to give himself every chance of being in contention to feature in the coming weeks.

He told Liverpoolfc.com: “I’m pushing really hard and working really hard to be back as soon as possible. Time will tell if I will be able to make it.

“It’s going really well, I’m progressing very well. Hopefully it won’t be too long now until I’m back to full training, and hopefully I’ll play a big part at the end of the season.”

Lucas was part of the Reds squad that travelled to Tenerife last week for warm-weather training with Klopp and his coaching staff, as well as their families.

The No.21 felt the venture was a thoroughly positive one and expects the benefits of the trip to become apparent in the final weeks of the campaign.

“It was brilliant,” he said. “Something like that has never happened before; it’s great credit to the manager for having the idea to take all the players who were not on international duty and the staff as well.

“It was a good chance to take our families, to be closer to each other and know each other better. It was a great idea to go out, get a little bit of sun and come back for these last six weeks of the season, which will be very intense.

“We were still working in training and for me, doing rehab. It was just going out to get a bit of sun and change the place a little bit. It’s going to be a very intense six weeks and we are all ready to make the most of it.”