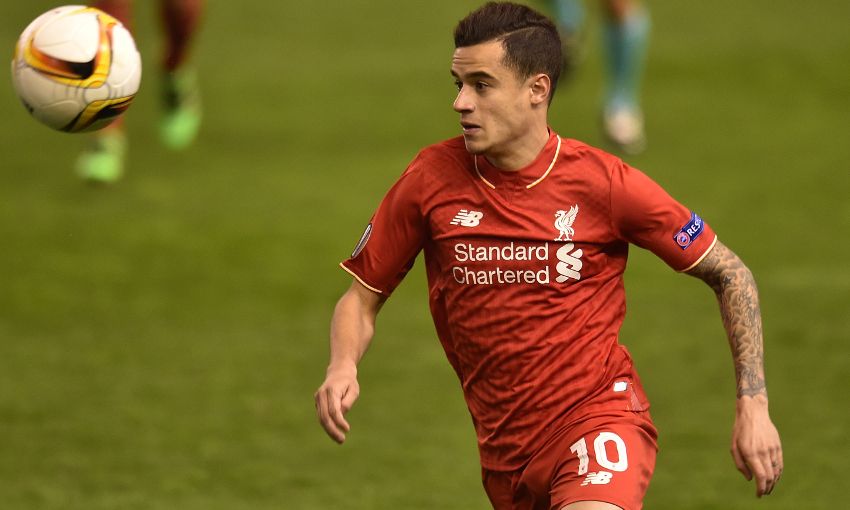 Philippe Coutinho believes Liverpool should approach tonight's meeting with Manchester United as if the tie is goalless and expects the Reds will have to battle until the end at Old Trafford.

The old foes lock horns again in the second leg of their Europa League tie, a week on from a pulsating 2-0 victory for Jürgen Klopp’s charges at Anfield that has them in command.

All of the talk from the Liverpool camp has centred on ensuring there is no complacency this evening – and Coutinho concurred as he looked ahead to the huge match with Liverpoolfc.com.

How have you used the time in between these two games and are you still feeling the adrenalin of the occasion at Anfield?

Yes, definitely. It was a great game, it was a great atmosphere. It was exciting to watch the supporters, everybody chanting all the time, supporting us, and the way the team played together was really beautiful. Everybody is eager for the next game. We know it is a great opportunity and to answer what I have been doing since the game, I have been spending time with my family to be calmer and focused for the game.

There’s a balance to be struck in terms of protecting the two-goal lead but do you simply have to approach it as if it’s goalless and not think of the first game?

For sure. I think our team has to start like that, with that mentality. Of course the advantage is important but in that moment we don’t have to think about it too much because we know the opponent’s strengths and, ultimately, we have to start the game the same way we did the last, everybody focused and trying to achieve the result that is important to us.

Could their need for goals play into your hands somewhat, though, with potentially more space to counter-attack if they commit players forward?

Maybe, yes. Maybe that will happen. We know that they need to score. We just have to play like we did. I believe the last game was very positive. I think everybody did what the coach wanted. I think we have to start without being too concerned about how the game is going to be because it is a classic, a big game, we have to battle until the end with our every strength to be able to win the game.

And are you and your fellow attackers at your most confident at the moment? Firmino and Lallana are in form, Sturridge is getting close to full fitness…

Yes, the whole team is very confident. We have been growing in the Europa League and Premier League so we are coming from a good place, we had some good victories. Everybody is confident, not only the players that start but also the players that enter mid-game and do well. Everybody is confident, the whole team. And it is going to be a great game. It is also important that every player is in form to play, so I believe it is going to be a great game.