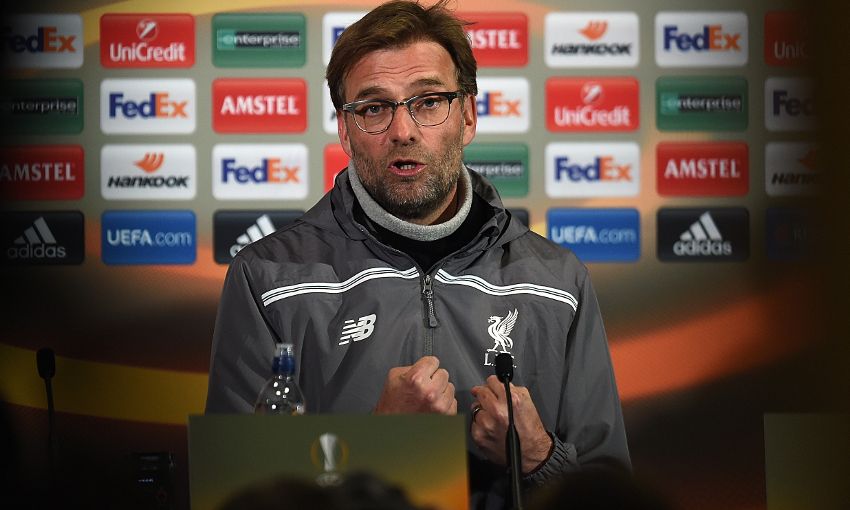 Liverpool can influence the atmosphere at Old Trafford on Thursday night by matching the performance levels in the first leg of their Europa League clash with Manchester United, believes Jürgen Klopp.

The Reds take a 2-0 lead into the Round of 16 tie following a rousing display at Anfield last week, when goals from Daniel Sturridge and Roberto Firmino were the least they deserved.

It was an evening to remember as the home crowd signalled their intent with an awesome rendition of ‘You’ll Never Walk Alone’ before kick-off and kept the noise up throughout the 90 minutes.

United are looking to their supporters to produce something similar as they attempt to respond in the second leg, but Klopp feels his team’s performance can set the agenda instead.

The manager said at his pre-match press conference: “Hopefully it’s a good atmosphere, I like it. It’s an atmosphere too when all of the people hate you, that’s not a problem!

“In Liverpool it was different from the first second onwards, but if we had played poorly I’m pretty sure it would have been not too easy to have the same atmosphere over the whole 95 minutes.

“We will decide how good the atmosphere is tomorrow with our performance. 3,000 Liverpool fans is enough, 3,000 is a really good number! And if they give their best, I’m sure we will take this and try to keep it in our performance.

“It’s not the Manchester United crowd against the Liverpool crowd, it’s the two teams against each other and the performance is always one reason for the atmosphere.

“So we want to do our best and it would mean it is difficult for Manchester United to enjoy the game.”

Klopp’s third meeting with United since his appointment will be his first at Old Trafford – an experience that rarely proved enjoyable for his predecessors.

Asked if he has considered the chance to change that record, the German responded: “The good thing is the longer things don’t work, the more likely it is that it will change.

“Maybe I’ll again have luck, as so often in my life. All the other managers had the problem and I can get the benefit. But I really don’t care – it’s not important, for me, to write history or whatever.

“We want to go to the next round and for this a draw would be good enough, so I don’t think about it. I only think about the game, not about the result.

“In the game there a lot of things you don’t know in this moment, because maybe Manchester United take maximum risks from the first second, but Louis van Gaal is a very experienced manager so he’ll have a plan, of course.

“We have to take it and to switch it, that’s our thing. A good start in the game is important. It’s not the most important thing, but we will try to play similarly or more intensive than we did at Anfield.”