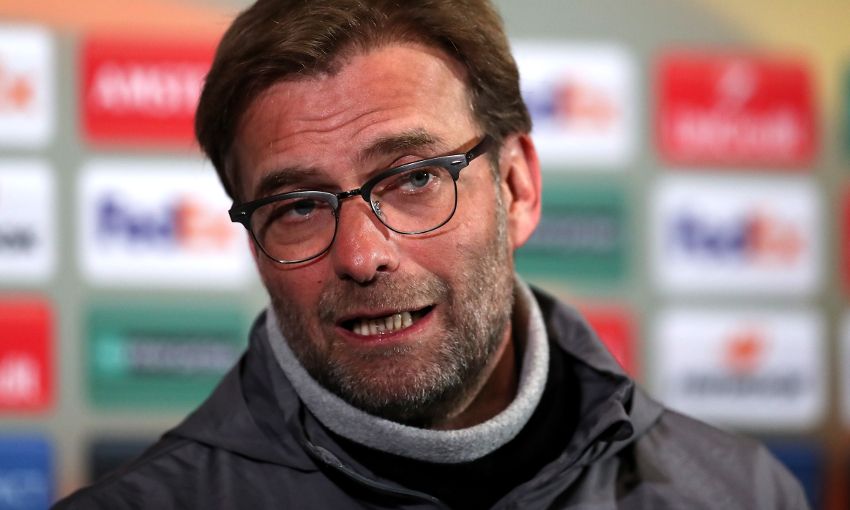 Jürgen Klopp has relished football rivalries since he was six years old and will not send his Liverpool team out to merely contain Manchester United at Old Trafford this evening.

England’s two most successful clubs meet for the second time in a week to conclude their Europa League Round of 16 tie, with the Reds 2-0 ahead after the opening game at Anfield.

Ahead of the return fixture, Klopp spoke exclusively to Liverpoolfc.com about his passion for such occasions and how his side should approach the match given their advantage.

The manager also reflected further on the ‘unbelievably loud’ atmosphere on home soil last Thursday and a pre-match rendition of ‘You’ll Never Walk Alone’ to be remembered.

Read on for a transcript of our interview with Klopp, while LFCTV GO subscribers can watch the chat by clicking play on the embedded video below. Sign up now.

There’s a great feeling around the place following a special night at Anfield, but how much has it helped to have a few days’ respite to bring a bit of calm?

In our situation in general, it helps of course. But not because of the Manchester United game [and that] it was so exciting and we need a few days to calm down, it’s not like this. I think most of the players had similar nights in their lives, otherwise they couldn’t play for Liverpool FC, so they should have played a few good games before. After this long season with all the problems we had, of course it was important that we could rest.

To be honest, it wouldn’t be the biggest problem to play on the weekend, staying in the FA Cup. When you saw the games and [it’s like] ‘OK, it would not be too bad’, but if we played instead of West Ham we would have played three times in a row against Manchester United – maybe for the first time in history – and somebody thought ‘not again Manchester United!’ So we had this break and we used it. We’re really looking forward to the second leg. We know we are not through. I have to say this, not because the players think it, nobody thinks it, but it is important to know that it’s only one part of this big game in Europe. We won this first part, we played impressively and it was really good. We should be prepared for the second leg.

This will be Liverpool’s 20th game of 2016. Every game must feel like it’s the biggest game, so how does this one feel for you?

Very big because it’s Manchester United, so it’s not important which tournament to be honest. I love derbies. Since I was six years old, when I really started thinking about football, I always loved to play games like this – against the next village, against best friends and things like this. Manchester United, it was clear before I came here, is a big game. Now I’m here and part of it – that’s really great. I’m enjoying this. It’s not easy but it’s possible and that’s pretty cool.

And of course in this season, if we can go through after two defeats in the league against United then it would be a little bit of payback if you want things like this. That’s what we wanted to do when we heard about the draw, that we could play again against United. Of course, you always have to think that you can go through and we thought it, we were not sure but we thought it and we saw the possibility – that was enough. Now we want to make the next step.

The match stats from the first leg at Anfield

Louis van Gaal has said his fans are going to need to create something very similar to the atmosphere at Anfield last week. Do you feel the special connection between yourself, the players and the supporters is as strong as it has ever been?

It was an absolutely special night. Everybody who was there felt it. I think I could say it was the best atmosphere since I’ve been here, but we had a few really good atmospheres – against Arsenal it was good, the last 15 minutes against West Brom was great and I tried to say thank you. It was perfect, absolutely perfect. My understanding [is that] we all do what we do only because the people are interested in it. If you can all really dive into an atmosphere and a game like this and forget everything around us and can really be only for this 95 minutes in the game, that’s perfect circumstances for a really good football game.

It was so unbelievably loud. ‘You’ll Never Walk Alone’, when we switched off the music we could hear the difference – wow, it was really impressive. My family were there and they said it was outstanding and really massive. I enjoyed it. But at the end, you cannot have an atmosphere like this and then play not too well or without passion. This night, the crowd started and we could continue so they could stay in this mood. It was a remarkable night.

How do you approach this game? Do you treat it like a one-off, a game in its own right?

That’s easy, really easy. In football usually you don’t have this situation – that in the first leg we won and everybody knows [with] a draw we are through or we make one goal and they have to make this. You always have to play to try to score goals and if you score goals then everything is in the right direction. For sure, we are not a team – everybody saw in this season – that can stand back and defend and be passive.

All the good games we played were intensive games, that’s the truth. Always when we had problems at the start, that didn’t mean we had the problems the whole game. Sometimes we could come back in the game. I think now we know and now we understand we have to start by going into the game and trying everything. Then we will see what happens. We don’t have to be passive, we have to be active, we have to try everything to try to win this game [and] not to play for a 0-0 or a draw. Give everything you have and then you’re on the safe side.