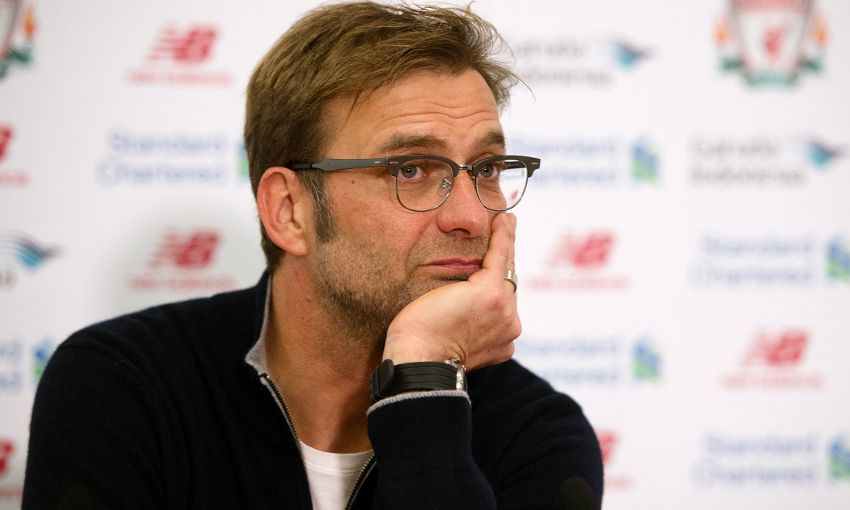 Jürgen Klopp has refused to consider the prospect of defeat against Manchester City in the Capital One Cup final, insisting: "we do [this job] only to win things".

The Reds have the chance to clinch their first piece of silverware under the German when they take on Manuel Pellegrini's side at Wembley Stadium on Sunday.

Klopp took time to emphasise the significance of the opportunity that awaits his team in the capital as he previewed the fixture at a press conference on Friday.

But the boss knows plenty of hard work is needed before the dream of claiming a maiden trophy under his stewardship becomes a reality, even if it is the only outcome worth thinking about.

"I don't know what [winning the cup] will mean to me - we will see afterwards. But this job in professional football, we do it only to win things: titles, cups, whatever," he said.

"A lot of players and managers work their whole life and can be really successful but don't have the chance to win anything, that's how it is sometimes. After a very short time, we have the chance.

"I'm sure you will see in the game that we really want to win this but what will happen, we have to wait a few more hours. It's a pretty strong opponent and with the draw today [in the Europa League] it seems like it's Liverpool against Manchester.

"They're really important games so we will see. If I think about [winning], I have a few nice pictures in my mind; after the game being in Wembley with our fans and having a real reason to celebrate together and no doubts about why we do what [we do]. It would be cool.

"But it's a really intensive 95/120 [minutes] or plus penalty shootout between this moment and the other moment. It's all about work, nothing else.

"I’m really pleased with the performance yesterday [against FC Augsburg] so that's a really good sign for us. I told the lads it was really good, it was what they needed and for us it was a semi-final before the final. Now, two days left... let's go!"

Legendary former Reds captain Steven Gerrard has given his backing to Klopp ahead of the showpiece fixture, insisting the former Borussia Dortmund coach could be the difference between the teams.

The manager was humble in his response to that praise, but admitted it is up to him to make sure the players are fully prepared for any eventuality against City.

"Steven, so often in his life, said the right things and made the right decisions; shooting from big distances and always hitting [the goal].

"But hopefully this time it's the truth too but I don't know. To be honest, I'm not sure I'm the difference but I know the way, that’s the truth.

"Now I have to show it as clearly as possible so that there's no misunderstanding [between] my mouth and the ears of my players. We are in a good way but we cannot ignore that maybe Manuel Pellegrini will have a few good words too!

"At the end it's football and the lads have to decide. There's absolutely no reason in this moment to have a doubt because everybody knows nothing is safe, nothing is sure in this situation.

"Really, everything is possible, I love this in sport. To keep your nerves, to take the pressure, to use the pressure, to set the level of intensity, all the things you can do in a game like this, that's really great.

"Some of us have to dream a whole life for one final and we can play this, that's cool. I'm really looking forward to it."

Just how Liverpool will go about trying to defeat City will remain a secret until kick-off, however, with Klopp keen to keep his cards close to his chest.

But the manager did at least promise that the Reds won't simply rely on repeating the tactical approach that saw them win 4-1 at the Etihad Stadium earlier this season.

"The only thing I can say is we will act completely different... or not!" he added.

"I should not talk here about tactics, even in Manchester they have televisions! That's not for the press conference.

"I don't think I should answer on this but you can be sure we will have a plan. It's not allowed to go with exactly the same plan in a completely different game.

"You need to respect the development since then of Manchester City; different players, different situation, Aguero not after injury, it will be a big difference.

"Kompany back, all full-backs in the race so they can rotate or change, I don't know.

"I think the line-up of City will not be the biggest surprise but we have to [be ready] for the best performance of Manchester City.

"If we know that it's possible then we have to think about what we can do that nobody can see.

"You cannot ignore the football quality of Man City when you make a match plan for this game, it's not allowed to think only of our own offensive situations, that's not how football works, especially in this game.

"Defending really good is a very important issue in a final, to stay in the game as long as possible without staying deep on the pitch. You have to act and set the level of everything as often as possible and that's what we want to do."