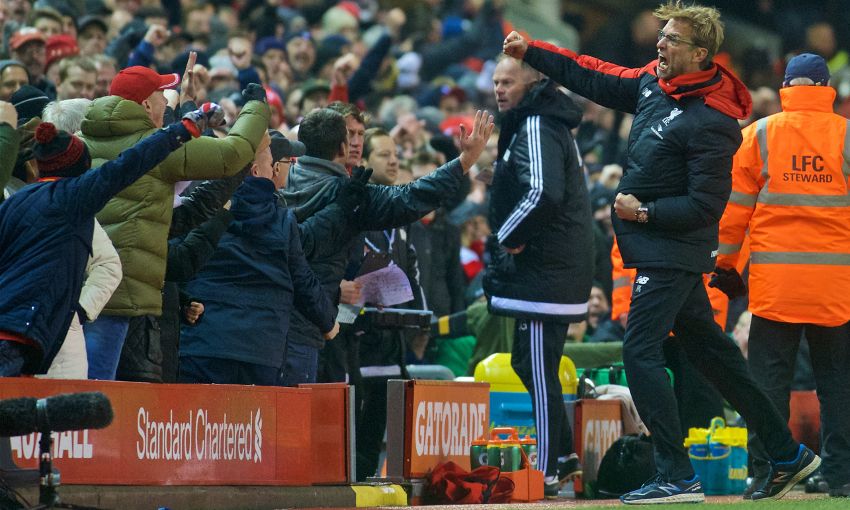 Jürgen Klopp is already well acquainted with the sights and sounds of Anfield but believes there will be a different atmosphere against Stoke City tonight and has called on his players to produce a performance to match.

Kopites rose to the occasion for the recent home clashes with Arsenal and Manchester United in suitable style, but the Reds were rewarded with just a point from two encouraging displays.

The manager knows he can bank on similar noise levels as his team look to successfully build on their one-goal advantage from the first leg in their Capital One Cup semi-final with the Potters and secure a trip to Wembley next month.

Therefore the challenge, Klopp told Liverpoolfc.com ahead of this evening’s decider, is for Liverpool to ‘pay back’ the fans and ensure they can begin planning for a day at the national stadium.

“I heard a little bit about it,” he said. “That it should be special.

“I have had a few matches at Anfield now and, to be honest, I can’t get enough of it. It’s a great thing to do, one of the best I’ve ever done.

“I’m really looking forward to it and I’m excited to feel how different maybe the atmosphere can be. We had the last two home games; against Manchester United, the crowd was brilliant but the result not, the performance was OK.

“And against Arsenal it was brilliant too, it was cool to play, with an OK result I would say. Now we have to go to this game and hopefully the atmosphere is a winning atmosphere.

Klopp added: “It’s a semi-final and you can’t go or should not go to the final with an average performance. You should always try to do your best, that’s for the players and supporters.

“You should always be open for a special performance and I’m open, to be honest. And, as I said, I’m really looking forward to it.”

Liverpool enter the second leg with a slight edge after a strike by Jordon Ibe and a resolute showing as injuries beset them at the Britannia Stadium at the beginning of January earned a crucial 1-0 result.

Stoke’s stock of attacking talent ensures the tie is far from over, of course, and Klopp’s respect for Mark Hughes’ work with his side means the German will demand a similarly co-ordinated effort.

The boss said: “Mark Hughes does a brilliant job there and he created a style of play, I’m not too long here but I hear it’s completely different to how Stoke played in former times.

“That’s a good way but, like all of us managers, he needs the players to be fit and I think one or two players could be out for the game.

“But I think their style of play is clear, we took it in Stoke brilliantly. What we did with their style was brilliant, we defended great and really high up the pitch.

“It was not only defending but how we played with the ball. It was only 1-0 and at the end everybody thought ‘you could have scored more’. But it’s like it is and you have to go two legs.

“We have the first result, the best result you can get if you play away, win there and to take away the plus and opportunity of a home game. That’s what we want to do, of course.”

Klopp will hope for a more straightforward game tonight than he witnessed on Saturday, when a 95th-minute Adam Lallana goal rescued a 5-4 victory over Norwich City in a sensational contest at Carrow Road.

While the need to improve on defensive aspects from that match is obvious, the manager wants the Reds to carry the never-say-die attitude they showed through to the semi-final decider.

“That’s special and you should keep it in your mind. Of course, a lot of these things we should keep in mind. The striking back again, because it could be something that could help us in the future, this never-give-up mentality.

“But, of course, it’s not always possible to score five goals so you should always think about the kind of goals we conceded and it’s too often that we concede goals from set-plays.

“This time they were different because they defended the first ball well but we struggled with the second or third ball. There were some other problems but as a common thing, it’s nice to think about.

“It’s football and it’s spectacular and it should be spectacular as often as possible and it was. I think the whole Liverpool world was on fire after the game and that’s the best thing you can do with football.”