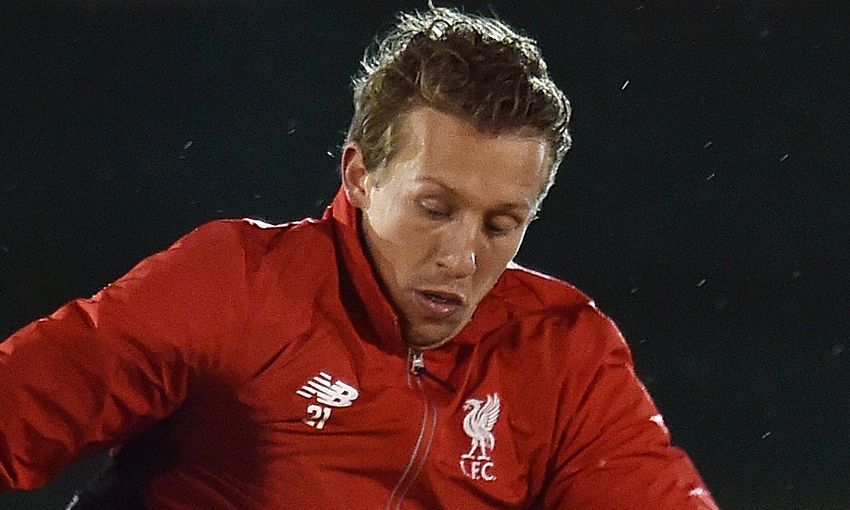 Lucas Leiva knows Liverpool cannot afford poor results in this week's mouthwatering Anfield double-header if they are to catch their rivals for a top-four finish in the Barclays Premier League.

Arsenal and Manchester United travel to Merseyside on Wednesday and Sunday respectively for fixtures that could go a long way to deciding the Reds' hopes of qualification for the Champions League this season.

And Lucas insists Jürgen Klopp's team must do all they can to avoid falling further behind the leading pack, even if there is still a long way to go this season.

"It is a huge week, as is every week," he told Liverpoolfc.com.

"With the record we had against big clubs away from home people expect to maintain that or even improve.

"We want to keep closing the gap and these games are so important for that.

"There are a lot of games after this but for sure it’s a very important week for us in the season."

Liverpool's last meeting with Arsenal, a creditable 0-0 draw at the Emirates Stadium in August, was notable for what appeared to be a farewell to the fans from Lucas when substituted in the 76th minute.

The Brazilian admits he believed he was close to departing the club at that point, but says he is as happy as ever at Anfield and has learned to ignore any speculation over his future.

"It was probably a wave saying goodbye, I was very close to leaving," he added.

"I learned the last couple of years that every transfer window, every time that some transfer can happen, my name will always be there because I’ve been here so many years.

"It’s normal people sometimes think that change for me would be good, for the club would be good, so I just learned that I need to enjoy every minute.

"As long as I feel that I am part of the team and I have something good to offer then I’m happy, I always said that I don’t have any reason really to leave.

"But of course I need to feel comfortable, I wouldn’t just be here for the sake of being here, I don’t think it’s my profile.

"That’s why I think I’m still here because I show I want to fight for the club.

"If I don’t feel right then something needs to change but it’s been very good for me the last three or four months I would say and I’m very comfortable at the moment in terms of games and the way I can help."

With Kolo Toure and Mamadou Sakho hoping to return against Arsene Wenger's side, it is unlikely Klopp will need to deploy Lucas in the unfamiliar position of centre-half once more.

But the 29-year-old has no qualms over his recent stints in the back four, insisting he is happy to do a job anywhere to help his teammates get over the line.

"When I was very young I played a few games [in defence] but not really," he explained.

"This year I had to play a few games there, especially when people have come out with injury or a tactical change or something like that.

"The Stoke game it was the case, we didn’t have any centre-halves on the bench, I had to go and fill for Dejan and just try to help.

"Of course, it’s not my position but if I’m asked to play I need to give my best and sometimes it will work, maybe sometimes it won’t work.