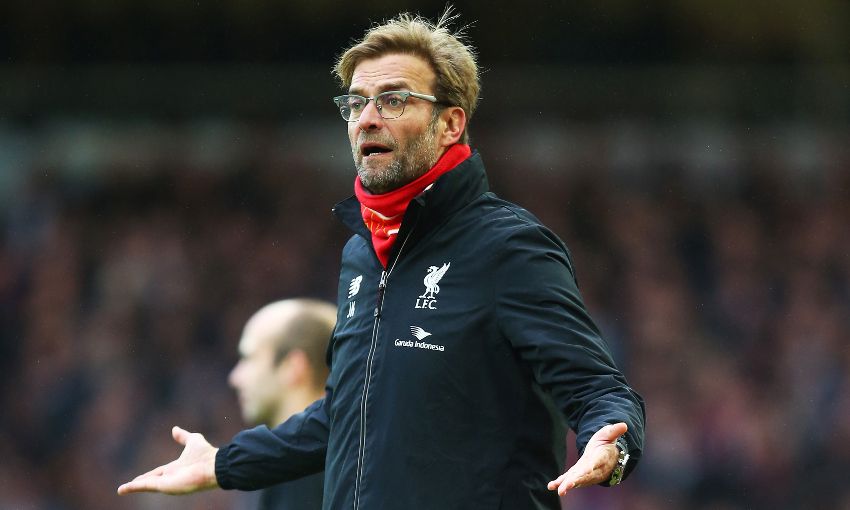 Jürgen Klopp admitted Liverpool were left angry by their own performance after 2016 began with a 2-0 defeat for the Reds against West Ham United on Saturday.

The German’s side headed to the Boleyn Ground seeking a third consecutive victory in the Barclays Premier League, having previously claimed three points from meetings with Leicester City and Sunderland during the festive period.

But headed goals early in each half from Michail Antonio and Andy Carroll gave the Hammers the spoils instead, prompting Klopp to speak post-match of the sharp frustration felt by himself and the players.

The manager said at his press conference: “It was not enough from my team today. In the decisive moments we were there, but we were not there 100 per cent.

“All of the TV stations just now have told me the situation with Alberto [Moreno] was a foul and it could have changed the situation around the first goal a little bit, but we didn’t react right to it because there was no whistle. We have to avoid the cross.

“We came back a little bit in the game in the first half and everybody saw when we start playing with a clear direction then we had our moments and made chances, but we didn’t score.

“In the second half, we started OK but out of nothing it was 2-0. Of course, West Ham had chances in the first half after set-plays, throw-ins, bad defending – we showed it [to the players] at half-time on TV.

“In the second half, we had our moments again, but five against one on the sideline, nobody won the ball, cross, Carroll against Clyne, no chance for Clyney again, header and 2-0.

“That’s what makes me angry today because you saw in each situation when we started playing fighting football, we had better moments but we scored no goals in this game.

While Manuel Lanzini also struck the woodwork for West Ham, Emre Can was unfortunate to watch a side-foot effort come back off the crossbar in the closing stages of the first half.

A hectic January schedule is now ahead, with a trip to Stoke City in the Capital One Cup semi-finals on Tuesday, and Klopp acknowledged the Reds must reach maximum levels in every game.

He said: “We could have done much better. Everybody saw we had these two moments [West Ham goals] – we have the set-plays, the throw-in and their shot that hit the post.

“We had our moments, we played football and we tried – and that’s what we have to do. But if you don’t fight, if you fight in these moments not with 100 per cent but with 95 per cent, it’s not enough.

“We have to defend this and we can play football. 0-0, you play football and then you will have your chances. We didn’t and that’s our fault.”

Klopp added: “You have to avoid the crosses, that’s the thing. In the box in the air, it’s 50/50. If Carroll or Benteke go for the challenge it’s 60/40. But the first goal was not Carroll.

“I know how football works, we have to avoid the cross. There are crosses in the game, that’s normal. It’s football, defending is a part of football.

“I was a defender, I enjoyed it. It’s a nice part of the game, you get dirty after, it’s not a problem, you don’t have to wash your clothes yourself. It’s our responsibility [to defend].”