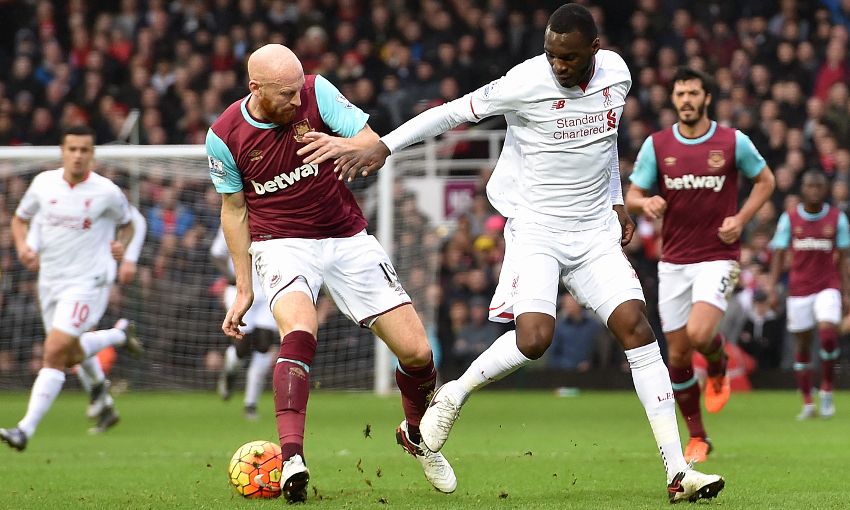 Liverpool’s first game of 2016 ended in disappointment as they were beaten 2-0 by West Ham United at the Boleyn Ground on Saturday afternoon.

Michail Antonio powered in the game’s opening goal with 10 minutes played when he met Enner Valencia’s delivery from the right with a header firmly planted beyond Simon Mignolet.

Manuel Lanzini then rattled the post from range for the Hammers, while Emre Can also hit the woodwork for the Reds in first-half added time.

However, Andy Carroll grabbed West Ham’s decisive second with a header from Mark Noble’s cross 10 minutes after the re-start to condemn the Reds to defeat.

Liverpool made two changes to their starting line-up for kick-off in east London, with Lucas Leiva replacing the injured Jordan Henderson in midfield and Jordon Ibe drafted in for Adam Lallana.

And, on the Reds’ final league visit to the Boleyn Ground, It was Ibe who fashioned the game’s first opportunity early on, drilling inches wide of the far post with a strike across goal from the right-hand side of the area.

But with 10 minutes played, West Ham took the lead when Antonio met Valencia’s deep cross with a powerful close-range header.

With the hosts in the ascendancy, Carroll then had a downwards nod gathered by Mignolet before Lanzini cracked the base of the post from the edge of the area with a swerving effort.

Next, a swift counter-attack looked to have put Valencia clean through in the box, only for him to be thwarted by a fine challenge from Alberto Moreno.

At the other end, a slip from James Collins seemed to have presented Christian Benteke with a chance to break through on Adrian on 26 minutes, but James Tomkins was able to produce a recovery tackle to deny the striker.

The Belgian was also involved when his header from a Moreno centre struck a defender and almost rolled for Roberto Firmino, but Adrian was able to beat him to the ball.

Then, a long throw from the West Ham right reached the back post, where Aaron Cresswell’s first-time effort was blocked by Nathaniel Clyne.

But Liverpool were beginning to show signs of establishing a foothold in the contest and, in first-half stoppage-time, Can’s side-footer from Firmino’s lay-off on the edge of the area cannoned against the top of the crossbar.

Indeed, the visitors began the second period in positive fashion and Benteke perhaps should have done better when he sliced well wide of goal from Moreno’s pull-back.

However, the Reds’ hopes of getting back into the contest were severely dented when West Ham extended their lead on 55 minutes, with Carroll heading in emphatically from Noble’s cross.

Klopp’s response saw a double change, with Lallana and Brad Smith replacing Firmino and Moreno, though the home team were denied a third goal soon after when Mignolet blocked Carroll’s header at close range and Valencia was unable to convert the rebound.

Liverpool toiled in an attempt to reduce the arrears and Philippe Coutinho was unfortunate when he overran the ball when attempting to jink his way through on goal.

Lucas then had a header cleared off the line by Noble after he nodded towards goal from Dejan Lovren’s flick on, prior to Coutinho’s stinging strike from a half-cleared set-piece leading to a scramble inside the six-yard box.

But the afternoon was to belong to West Ham, who were prevented from getting a third in stoppage-time when Mignolet saved from Valencia, but were able to see out the remainder and collect the three points.