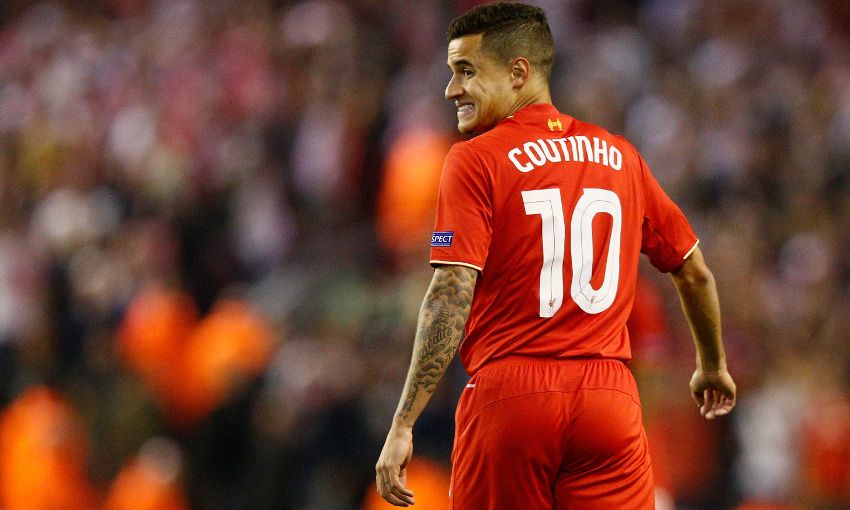 As the third anniversary of his move to Liverpool approaches, Philippe Coutinho has set his sights on securing his first silverware for the club by the end of the season.

The Brazilian swapped Inter Milan for Anfield in January 2013 and has since gone on to become a firm fan favourite thanks to his eye-catching dribbling skills and penchant for long-distance strikes.

But, while Coutinho has grown to become a consistent Barclays Premier League performer, his desire to keep improving remains as strong as ever.

Reflecting on his time on Merseyside so far, he told Liverpoolfc.com: "Three wonderful years. As I've said, in the beginning I was given a very warm welcome, from the fans, the team, everyone who works here at the club.

"So I'm very grateful to the club, and now I hope to be able to help the team win trophies, it’s very important to keep battling.

"We learn little by little. When you arrive here, the football is very different, the style of play, it's more intense, you use your body more, it's faster.

"These things I think I've improved on since I arrived, as I came from a different style of football, and I hope I can continue to improve."

The No.10 now wants to chalk up the next big milestone of his Anfield journey by claiming a trophy.

And with the Reds in the semi-finals of the Capital One Cup and the knockout stages of the Europa League, this season is as good an opportunity as any other.

He added: "We're in a very good position. It's the goal of everyone involved, we're all focused on fighting for the trophies and I think we have a great chance in the competitions we're in this year.

"We're going to fight for that and I hope we win a trophy this year."

Three years in Liverpool has given Coutinho plenty of time to get in tune with the city's culture and famously unique accent.

When asked if he considers himself an adopted Scouser, the Brazil international replied: "Maybe, but I still don't understand much of the language, I'm learning slowly, but learning to speak [it] is difficult.

"[Lucas] speaks just like the locals. He's definitely a Scouser!"