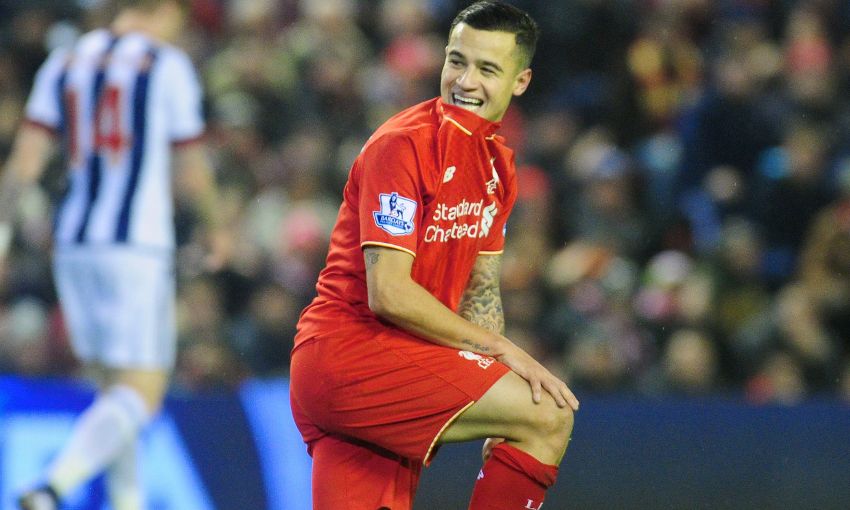 Philippe Coutinho is determined to make up for lost time after returning from a spell on the sidelines that had disrupted a sensational run of form for the Liverpool No.10.

Four goals in three Barclays Premier League games by the Brazilian helped Jürgen Klopp’s team to memorable victories at Chelsea and Manchester City in October and November, before a hamstring injury forced him to miss four consecutive games.

Coutinho came back with a welcome 30-minute substitute appearance against FC Sion a week ago and was then in the starting XI for the dramatic 2-2 draw with West Bromwich Albion at Anfield.

The relief of being involved again is obvious from the 23-year-old’s words, though his overall assessment is not a personal one but focused on the collective – he wants to contribute to the team as quickly as possible.

“I’m feeling much better,” the attacker told Liverpoolfc.com at Melwood. “I’m training and I’m available for selection. It’s the best thing, because to be out injured is very difficult – it’s awful.

“Of course, we love playing football and when we’re available for selection, it’s the best thing. I’m feeling good and I hope I can help the team out in the best possible way.”

Coutinho was off the pitch by the time Divock Origi lashed in a stoppage-time equaliser – with the help of a deflection – to salvage a deserved point for the Reds against West Brom last weekend.

He was therefore able to soak up the noise and support around him as the home fans, urged on from the touchline by Klopp, played their part in inspiring the team to find a leveller.

And the Brazil international hopes that connection can continue to pay dividends for the rest of the season. “We didn’t give up at any time,” he reflected.

“It was a very difficult game against a team that sat back and the atmosphere inside the ground was amazing, the supporters were urging us on, so the goal was very important and we were satisfied given the way things were going.

“The fans are there supporting us and that’s really important, as I’ve said before. We hope it’ll be like it was in the last game until the end of the season, everyone united, so we can achieve positive results in the league.”