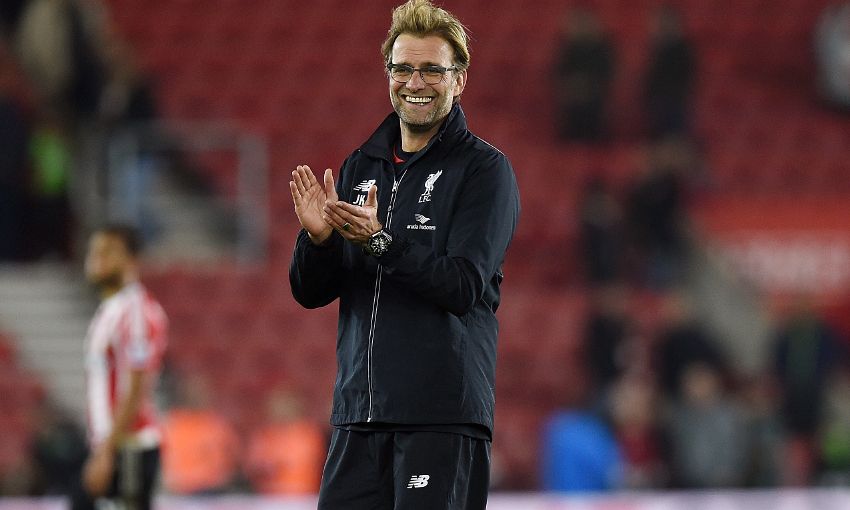 Jürgen Klopp acknowledged Liverpool were left elated by the stunning 6-1 victory at Southampton that sent them flying into the Capital One Cup semi-finals, though claimed there was still room for improvement.

The Reds fell behind at St Mary’s with just 39 seconds played when Sadio Mane headed in an opener for the Saints, who began the contest firmly on the front foot.

However, a quick-fire brace from Daniel Sturridge midway through the half put the visitors in front before Divock Origi tapped in a shot from Alberto Moreno just before the break.

The Belgian striker added Liverpool’s fourth in the second half, before Jordon Ibe came off the bench to blast in goal number five.

And a magnificent night’s work was capped off in fine style when Origi headed in his hat-trick goal before the end to put an emphatic seal on the outcome.

Klopp told his post-match press conference: “We had some problems in the first minute, no fewer problems in the next 10 and then we started playing the game, but it was not easy.

“For the first situation [Mane goal], we showed it to the players at half-time because if you start like this then you need too much luck to come back in the game. In that situation, everything that we did was wrong and only at the last, when the header was in, everybody could see and think, ‘What is Alberto Moreno doing here?’, but I could see 25 faults before.

“The style of Southampton tonight was very, very clear – long balls with [Graziano] Pelle fighting for them – and in the first 10 minutes they were better and getting the second balls. They were always dangerous for us.

“Then we started to play the game. Daniel’s first goal was not too bad – it was a perfect pass from Joe Allen, a really, really good pass and I think it was a goal the moment the ball was in the air before Daniel got it. It was a perfect goal.

“The second goal came from a perfect pass from Emre Can and then the third goal, a good shot from Alberto Moreno and I don’t know with which part of his body, but Divock got his first goal.

“We spoke at half-time and I don’t like to say too often, ‘it’s 3-1…be careful’, but always in a cup game you cannot ignore that because it’s not over unless you stay in the game, stay concentrated and start better than we did in the first half – and that’s what we did.

“We made super goals, I have to say – they were really, really nice with good play and good chances.

“We had to react a little bit with [Southampton’s] new system, I think they went to 3-5-2 in the second half, but when we could bring Jordon Ibe on, it was a good moment for us because one-on-one, it is not easy against Jordon.

“We have to defend well and then we can use his pace, and that’s what we did with the next two goals – and it was a perfect cross from young Brad Smith [for the sixth goal].

“It is not too often we can talk about this…maybe we will have to wait too long for the next time we can enjoy a football game like this, apart from 20-25 minutes. It was a good one tonight.”

The result has set up a two-legged semi-final with Stoke City and means Liverpool have lost just once in their 11 matches under Klopp.

The manager confirmed the Reds’ schedule meant he was forced to shuffle his pack slightly for the clash at Southampton and, while he admitted his players were able to savour tonight’s display, there’s plenty of hard work still to come if they’re to maintain such standards.

“The problem is in this big amount of games, you need to be fit and you need a little bit of luck with injuries and all these things,” Klopp said. “It is really intense for all. It was unbelievably difficult to make a team for today.

“We left Clyney out of the squad because we didn’t want to risk something happening and thinking, ‘Oh, we have Clyney, I’ll bring him on’. I told him if he was [in the squad] I would bring him on because I know myself. I had to try something special, so he was not in the squad.

“In a game, you need to be more concentrated than we are sometimes, I have to say. It’s no problem if you are awakened by the opponent, but it happens too often for us. Tonight we could strike back.

“It’s good, the lads feel good and that’s very important because it gives them more confidence. But this league is too strong to dream and we have to work.

“If somebody in this room thinks it’s an easy game against Newcastle [on Sunday]…it’s really difficult to go there after two days’ break or whatever and then play again. It’s hard work, nothing else. But this game tonight, after the game, feels really good.”