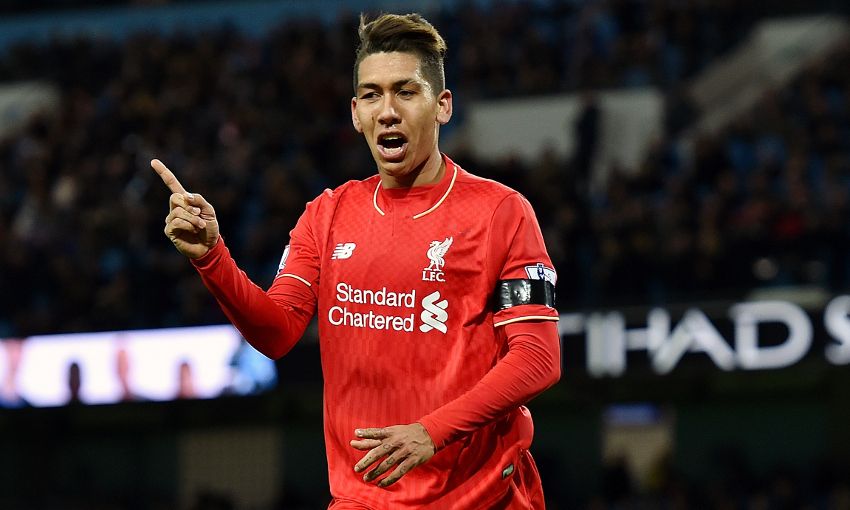 Roberto Firmino's versatility allied to his refusal to shirk a challenge will ensure he becomes a star man for Liverpool in the coming years.

That is the view of Anfield legend Dietmar Hamann, who has followed the attacker's development closely since he initially rose to prominence in the Bundesliga.

Firmino bagged his first goal for the club in the 4-1 rout of Manchester City on Saturday, as well as posting an assist and forcing Eliaquim Mangala's own goal.

The Brazilian's man-of-the-match performance at the Etihad Stadium was his best since joining the Reds from Hoffenheim in the summer - but Hamann believes there is more to come.

The former midfielder, who knows all about making a successful switch from Germany to the Barclays Premier League, has backed the No.11 to become 'a great asset' for his old club.

"I spoke to people who worked with him - [ex-Red] Markus Babbel was his manager in Hoffenheim - and I saw an awful lot.

"He’s very direct, he’s a little bit different to Coutinho, that’s why he can also play that role as a false nine or a centre-forward.

"Sometimes when Brazilians or South Americans come to the Premier League [people] ask if they can cope with the physical demands but I think he’s more German or European than South American, mentally.

"He never shirked a challenge in Germany, he was always one of the first ones to go where it hurts, and I think he’s shown that in his few games for the club.

"He’s got tremendous ability and, coupled with the mental strength he’s got, I think he could be a great asset for the club for a long time to come."

Liverpool have impressively beaten both Chelsea and Manchester City away from home since Klopp's appointment as boss in October.

Hamann believes such results are key to successful seasons and expects the confidence gained from beating two top sides in such convincing fashion to provide a big boost for Jürgen Klopp's squad.

"I think, for the team, it was a small step - but I think psychologically it was a massive step," he added.

"In recent years the team struggled to beat top teams – especially away from home.

"If you want to compete for trophies, a Champions League place, or maybe even for a league title, you’ve got to sometimes win these games away to Manchester United, Arsenal, Manchester City.

"To go [to City] and to win the game, and also the way they did win, more or less put the game to bed in the first half, was majorly impressive.

"And it’ll also send shockwaves around the Premier League because I think since the new manager has come in gradually performances have improved and results have improved.

"That fear factor has always been a big part in Liverpool’s history, not only away from home but especially at home.

"I think a lot of teams will be wary in the next few weeks when they do play Liverpool, whereas maybe a year ago people didn’t mind playing Liverpool."