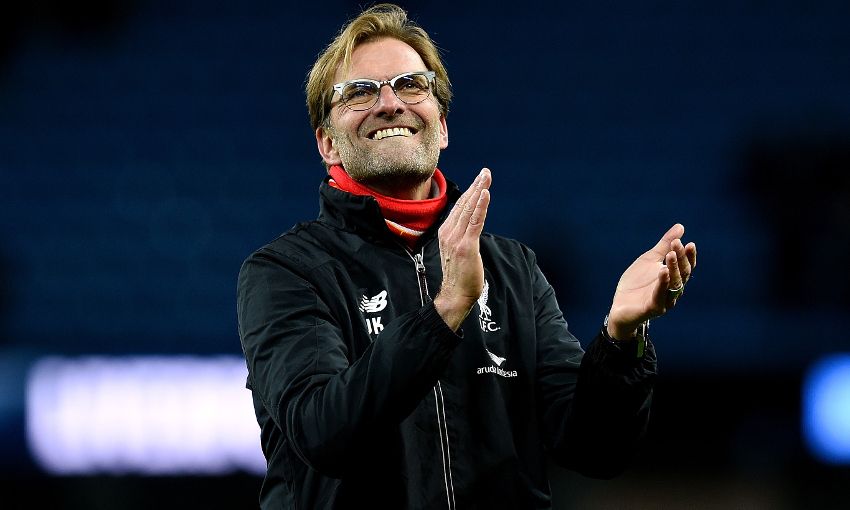 Jürgen Klopp declared himself highly satisfied with the display of his team after they racked up an emphatic 4-1 win at Manchester City on Saturday – but remained adamant Liverpool can perform even better.

The Reds were in simply devastating form as strikes from Philippe Coutinho and Roberto Firmino added to Eliaquim Mangala’s early own goal to put them into a three-goal lead just after the half-hour mark.

Sergio Aguero reduced the arrears for the hosts before the break with a fine long-range finish, but Martin Skrtel’s stunning half-volley secured a richly deserved three points for Liverpool.

Nevertheless, afterwards Klopp told reporters: “It was very satisfying, but whether it is was the best [performance] I am not sure. I rarely compare games.

“Tonight was very good, but it was not perfect because we can defend better and stay in the game better when we have a 3-0 lead.

“But when you win 4-1 against Man City it should be a very good performance – and it was very good. It was deserved.”

Liverpool’s intentions and game plan were clear right from the first whistle as they pressed and harried their opponents all over the field.

It was that pressure that played a key part in their opening two goals, while the third was the result of a speedy counter-attack from deep.

“What we try to do is to analyse the opponent and see what their biggest strength is and things we can do that they don't feel confident [defending against] then we try to do it,” Klopp said, when quizzed about the tactical setup.

“It's a very important thing in football and the better your opponent is the more important it gets that you do things like this.

“Manchester City were top of the table, so at this moment are the best team in England. We had to try to find some ways to cause them problems and that's what we did.

“The next point is, if you win a ball [high up the pitch], then it's not the longest way in the right direction and that's very important of course. We try to do similar things but not always the same.”

Operating as Liverpool’s two furthest forward players, Coutinho and Firmino were outstanding in closing down and regaining possession, causing the City defence no end of problems in the process.

Firmino’s goal was his first since moving to the Reds from Hoffenheim in the summer and capped a fine display.

Klopp said: “I told you a few weeks ago I knew about his quality. He trained for 10/12 days with us without interruption, which is very important.

“He was with us at Melwood, the same as Phil Coutinho, and that was the reason we played like this in a formation like this. We tried to put as many players as possible on the pitch who had trained together in the last 12 days.

“They did well, but everyone could see Roberto could have used one chance more maybe – they were big chances. But he had a good match, of course.”

The victory at the Etihad means Liverpool have won four of Klopp’s first eight games in charge, drawing three and losing one.

The German feels it was another key step forward in the development of his squad.

He explained: “For us, it’s not important what is different – what is important is that we can see and feel things develop, that there is a development in our game.

“That’s what I said at the beginning – we need common experience that we can talk about and work with. That’s why I said tonight we can do better in many, many parts of the game – maybe not in counter-attacking because we were really good, but we can defend better and start to believe in our own strength.

“At half-time, I said to the lads I had a little bit of a feeling they were surprised they were in the lead here. That’s what we have to learn – it’s normal in football that if you have quality, and we do have quality, you can be in the lead, but we can defend better than we did in the last 10 minutes of the first half.”