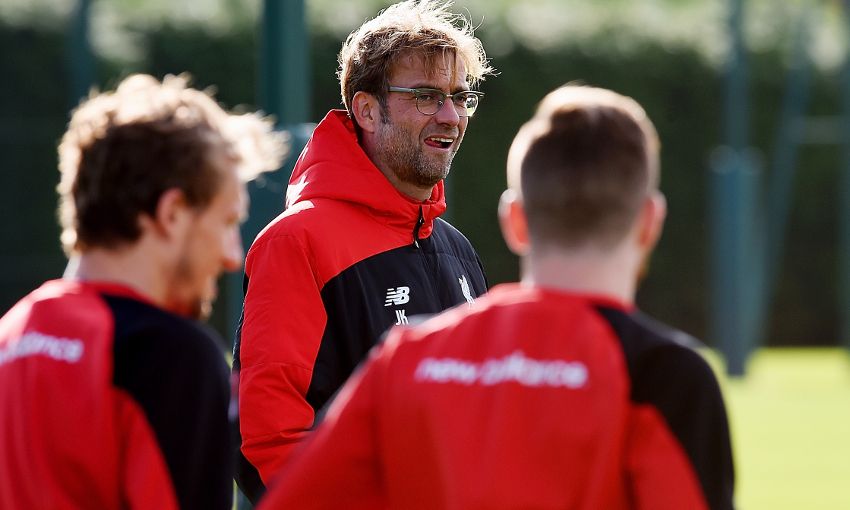 Jürgen Klopp insists Liverpool's midweek round trip to Russia should have no effect on the side's performance against Crystal Palace tomorrow.

The Reds flew east on Wednesday morning ahead of their Europa League Group B clash with Rubin Kazan, which they won 1-0 the following evening courtesy of Jordon Ibe’s first competitive goal for the club.

Immediately after the victory at the Kazan Arena – the third consecutive success for Klopp – the squad took to the skies again, arriving back on Merseyside in the early hours.

But the boss has no concerns about fatigue among his players, particularly given the buoyant mood that has been forged by recent encouraging results.

He said at his pre-match press conference: “If we had travelled by train or car, it would be a big problem. But we slept on the plane.

“I am 48 and it’s not the best age maybe! But I slept well on the plane and in the morning at home, so it’s a normal journey and a normal thing to do if you want to play in international tournaments.

“It’s the same when you come back on Wednesday or Thursday morning and have to play on the Saturday. There’s no difference, for me.

“We want to play the next game because we feel good in this moment, we feel more confident, we have had results and we want to have results in the future. The best chance to get this, the only chance, is to play against other teams. The next match is tomorrow and we are here.”

Adding to Klopp’s positivity is the potential to freshen up his team at Anfield, with the German reporting that Philippe Coutinho should be ready to feature again.

“He told me he was OK on Thursday too!” said the manager. “But I didn’t want to risk, the same with Adam [Lallana], who played a few minutes.

“We had some small problems after this game, normal after the intensity of the game. So we have to wait for the last hours until we are sure who can play tomorrow.

“But there’s nothing serious in this moment. Now we will see who can train and then we’ll start thinking about the starting line-up.

“Now I have to see in training my feeling about the feeling of the players. Then we’ll make a starting line-up.”

Klopp has now overseen three wins and three draws since taking charge of Liverpool a month ago.

One reporter at the pre-match briefing was keen to understand more about what the boss and his backroom staff have implemented to get an unbeaten streak going.

“So you have to think more about what you say. Do we have to train? I said at the beginning we have to turn small screws and that’s what we are doing at this moment.

“The base was, of course, not so bad – Brendan [Rodgers] did a really good job here. It’s not that we should show them how football works; there is a good base in this team because of Brendan’s work, so we can start to develop and start to come together, because football can be different.

“Every manager has different ideas. That’s what we have to do, of course, but that’s what we did. Then we could get a little bit of stability.

“That’s very important for offensive play because you can feel free in offense when you know that not each chance of the opponent is a goal.

“We feel good in this moment but we know about our responsibility for our performance in the next game. Crystal Palace are difficult to play against.

“We know about their transition game, we know what their plan is, and we’ll try to be prepared in this short time. It is different but it’s not the biggest difference.

“So we have to be prepared and maybe we can use our experience from the last games for this game. If it’s possible, we should do this and play football.”

The Reds were beaten home and away by the Eagles last season but past meetings have no influence on Klopp, who explained why he’s well versed on the threats they pose this time around.

He said: “Sometimes it’s good to be new. Somebody told me about the special history with Crystal Palace but I feel nothing when I hear it – it’s only football.

“In life like in sport, you can lose big but you have to react in the right way. If you haven’t reacted in the right way until now, you should do it tomorrow; strike back, whatever.

“If we can use this experience, we should do it. But nobody has to be afraid because of this opponent – it’s not impossible to get results against Crystal Palace.

“It’s a challenge, of course, but our pre-match and post-match analysts work pretty well, so we always feel well prepared for the opponent.

“We have long meetings together. We cannot train so much but for the rest of the day we can work as long as we want. We know everything we have to know about Crystal Palace, so in this moment I don’t feel it’s new for me because I have so much information.

“Maybe they’ll change one or two positions but they have had good results and have played well, so maybe they’ll play with the same formation.

“We know where their strengths are and we have to be aware of this. But it’s football and at the moment we have a good chance to win. We start to believe now and let’s do it tomorrow.”