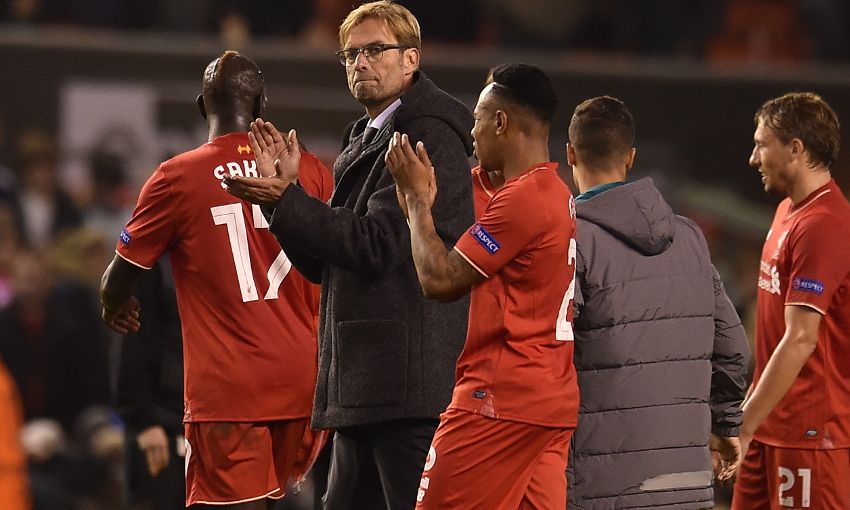 Jürgen Klopp felt Liverpool were missing the 'decisive two per cent' after Rubin Kazan weathered a wave of attacks to claim a 1-1 Europa League draw at Anfield on Thursday night.

The Russian visitors threatened to ruin the manager’s first home match when Marko Devic crept in behind the defence and clipped around the reach of Simon Mignolet for the opener on 15 minutes.

But within seconds of Rubin being reduced to 10 men later in the half, Divock Origi nodded down a dangerous free-kick and Emre Can swept in an equaliser from just yards out.

The Reds peppered the opposition goal throughout the second period and Christian Benteke went closest with a side-footer against the post, but a winner eluded them.

FC Sion’s victory in Bordeaux in the evening’s other Group B game leaves Klopp’s team in second place, trailing the Swiss leaders by four points at the halfway stage.

The manager reflected: “It wasn’t a boring game. It was a very interesting game, a big challenge because of the quality of Rubin Kazan.

“Everybody could see they are not too bad – very experienced, very cool when they got the ball. They didn’t have it too often but when they had the ball they were really good.

“They got the first goal and that’s one of the biggest challenges in football. You are in a good moment, your direction is OK, you’re in the game, your concentration is high and you’re playing football and you have this. You need to restart in the game but we did it well and made our goal.

“Before that they got the red card. Sometimes it’s a big advantage against 10; most of the time it’s a really thankless job because now they stop playing football. Now they defend in a big, compact block.

“That’s what we had to do better tonight, but we had our moments, we hit the post with Christian. We had some other moments – good chances – but at the end, no goal.

“So I would say 98 per cent OK, not perfect, but the last two per cent – the decisive per cent – we missed. That was the problem this evening.

“Sion won their game so they are away [at the top of the group], maybe away. We have a situation that we can come back but of course the next game in cold Kazan is the next challenge.

“Tonight wasn’t a masterclass but it’s not the worst day in my life. In the next game we have to work hard – that’s what we did tonight – and we’ll go on like that.”

The occasion of course signified Klopp’s first home game in charge of Liverpool.

Upon arriving at Anfield ahead of kick-off, the manager allowed himself a few moments to take in his new surroundings as he took a brief stroll across the turf to soak up the stadium’s aura.

Fans naturally afforded the German a hearty welcome – one which delighted the new boss – but nevertheless, he concedes winning the game would have been the perfect way to mark the occasion.

He said: “It was a warm welcome. It was one of the best moments for me tonight, but not the most important.

“Of course, it’s important for all of us and better that people don’t think I should stay outside the stadium, but we don’t have to talk too much about it.

“You can be sure I felt everything positive tonight but then I tried to be concentrated on the game. Usually when I do this, I don’t hear too much during a game because it is work for me and work for the team.

“But, of course, when you come into a new house for the first time, you will receive a [housewarming] present – and I am not quite satisfied with my present tonight, but it was only the first time and I will be back again and then maybe it will be better!”

Having got his name on the scoresheet from a central midfield berth, and impressed in Klopp’s two games as Reds manager so far, one journalist quizzed the boss on whether he intended to use Can in the same role more often.

He replied: “I think he is a midfield player but of course he can play different positions and that’s the good thing with Emre.

“At this moment, I don’t know who can play on Sunday again and maybe Emre will play in another position. I hope he can play and then we will think about this.

“I’ve known him for some years and I know he is usually a midfield player but he can play any role.

“With the German national team he played full-back, and if we give him more time he can play there, but most of the time, in his youth, he has played in midfield.”

Before departing the top table inside Anfield’s press room, Klopp took the opportunity to again reaffirm his commitment to helping Liverpool to success.

He said: “I’m here as the manager of a football club, one of the best in the world, and now we have to develop our game so that our supporters can enjoy our game a little bit more in the future.

“I think tonight, they [the fans] had moments they could enjoy, moments where the players brought their whole heart on the pitch – that’s what everybody wants. It was not boring, I don’t think anybody wanted to go early.

“We tried it all and in the end we didn’t win. But maybe it’s not the most world-changing game you’ve ever seen.”