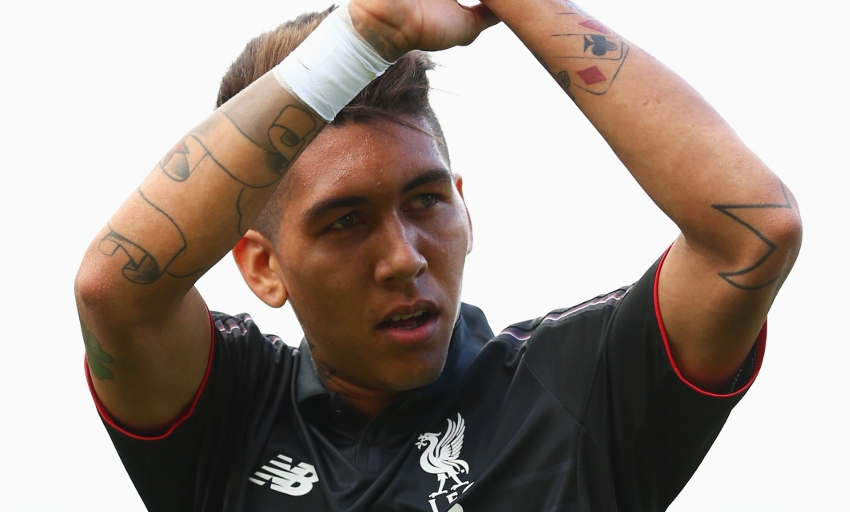 Brendan Rodgers today praised Roberto Firmino for the manner in which he has taken to life as a Liverpool player and revealed the forward is closing in on a first start for the club.

The Brazilian joined the Reds from Hoffenheim in June while competing in the Copa America with his country – participation that meant he didn’t arrive at Melwood until late July.

However, having handed Firmino his competitive debut as a late substitute at Stoke City last weekend, Rodgers is delighted by how the 23-year-old is adapting so far.

The manager told his pre-match press conference: “He’s building up his fitness really well. He’s a guy that helps himself because he trains to the maximum every single day and he’s coming along very, very well.

“He’s a good guy as well and every aspect of life here in Liverpool, he’s thrown himself into – both football and language. He is working very, very hard and he’s getting close.”

Further proof of how quickly Firmino is settling into his new surroundings came on Monday afternoon when he fired a hat-trick in a behind-closed-doors friendly against TNS at Melwood.

Also on target in that 5-1 win was Danny Ings, who 24 hours earlier had been close to making his league bow for the Reds with a late appearance at the Britannia Stadium, only for Philippe Coutinho’s 86th-minute stunner to change Rodgers’ plans.

Nevertheless, the striker will have plenty of opportunities to showcase his talent in the first team over the coming weeks, insists the boss.

“For all the players, I’ve explained and recognised that between now and the end of the month, it can be difficult because if you’ve only got one game a week and the team is winning, there may be very little change,” said Rodgers.

“It’s difficult for players, but once the international break is done, the games come thick and fast, so it’s important for us to prepare the players as best we can. If they’re not playing, we’ll get them games behind closed doors to maintain and improve their fitness levels.

“For the likes of Danny and the other players, they had that game – and it was a good game for them. Danny is settling in very well to his life here.”

Alberto Moreno and Lazar Markovic are two other players who didn’t feature at Stoke but will be called upon regularly this season – and Rodgers stressed the importance of being fully prepared to seize upon any opportunities.

He said: “Both players are very talented players – that’s clearly why they’ve come here, because they’re both good players.

“Maybe for the first time in their footballing careers, especially being so young, they find themselves not being a regular. They know very well from the conversations we’ve had that it is a long, tough season and they will certainly be needed.

“They are fighting and working well, and when the opportunity comes to play, I’m sure they’ll both be ready.”

One man who has grasped his first-team chance over the summer is Joe Gomez.

Rodgers admits the 18-year-old’s impressive form since joining the club from Charlton Athletic in June meant that any thoughts of a potential loan deal in order to gain experience were shelved.

Indeed, Gomez was handed a start at left-back in the season-opener at Stoke and duly turned in an assured display, helping quell the threat of Jonathan Walters.

“He’d played games and was managed very well at Charlton,” Rodgers said. “He came here and I wanted to assess, like I do with all players – in particular young players – where his pathway lies.

“It was maybe a case of bringing him and thinking about whether he needed a loan or to stay here, but very quickly he showed me he can be a really, really important member of our squad here.

“He can play in a few positions – centre-half being his main one – but he’s got the flexibility and qualities to play at full-back. He’s definitely a player that will add great value to our squad.

“For a young player, 18 years of age, to make his Premier League debut away at Stoke against an outstanding player in Jonathan Walters with the experience he has, to cope as well as he did [was fantastic].

“I spoke to Jonathan after the game and thanked him for giving Joe that experience! He spoke well of him as well and knew he was a tough opponent to play against.”

Rodgers added: “Joe had a decision to make in the summer with a number of high-profile clubs wanting to take him, but he felt his best opportunity to improve and develop was by coming to Liverpool.

“He’s done that and he’s got into the team. I’m sure there’ll be moments along the way where we need to manage him, but at the moment he’s enjoying it and knows there’s a lot to learn yet.”