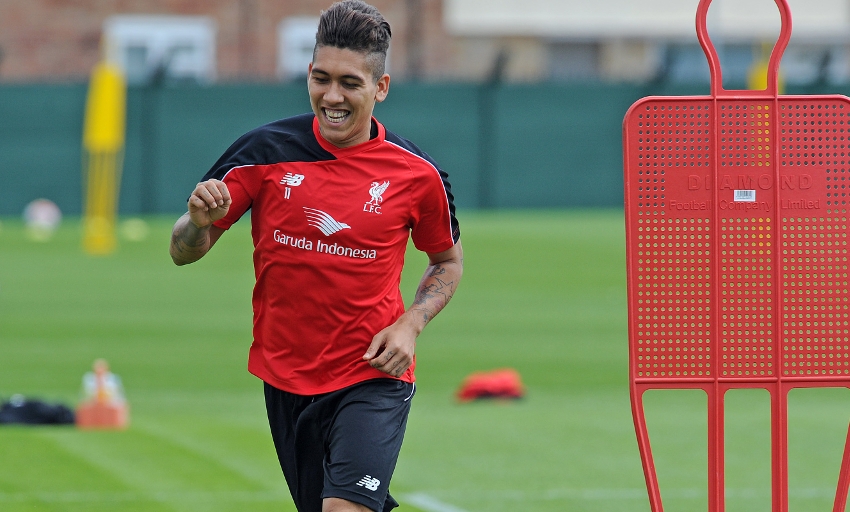 Liverpool fans are waiting patiently for a chance to see Roberto Firmino in competitive action but the Brazilian has already made a strong impression on his new teammates in training.

The No.11 arrived on Merseyside last month after the Reds had swooped earlier in the summer to secure the attacker’s signature from German side Hoffenheim.

Philippe Coutinho played a part in ensuring his compatriot chose Anfield, using their time shared at the Copa America to explain exactly what Firmino could expect.

The 23-year-old featured for the first team during the friendly win at Swindon Town last weekend as Brendan Rodgers’ side build towards Sunday’s season opener against Stoke City.

And, according to Coutinho, he has wasted no time in exhibiting his talent at Melwood either, exciting a reshaped squad determined to improve on 2014-15.

He told Liverpoolfc.com: “Firmino is a great player and character – he was thoroughly welcomed by everyone in the dressing room. We can notice his skills by watching him in training.

“He’s a very intelligent player and everybody is glad about how he’s settled into the squad. I’m sure he will be of great help to Liverpool and will bring joy to our supporters.

“Everybody is looking forward to the start of the league and we’re all keen to see him and all of the new boys on the pitch.”

Firmino plundered 47 goals in 151 league and cup games for Hoffenheim across four-and-a-half fruitful years with the Bundesliga outfit.

His development in Germany allowed him to translate that form onto the international stage too, forcing his way into the Brazil national team.

Coutinho has confidence that his countryman can continue that kind of strike-rate in the demanding Barclays Premier League.

“Firmino was playing in a league which is very similar to the Premier League,” added Liverpool’s No.10.

“We’re all happy that he has chosen Liverpool as he’s an awesome player. I hope he can score many goals and help us.”

Coutinho marked his own return to match duty for the Reds with a late settler in the 2-0 friendly victory over HJK Helsinki last Saturday.

His deflected effort capped off a typically classy display by the playmaker, who was voted the team’s Player of the Year by fans and teammates alike in May.

But the man Steven Gerrard described as ‘the next big thing’ believes he has more in his locker.

“There’s so much more to improve - that has always been my thinking,” Coutinho said.

“We didn’t achieve our objectives last season and so we’re preparing hard in pre-season to gain momentum from the very start and keep it going.

“We’re constantly trying to evolve and improve every aspect of our game.”