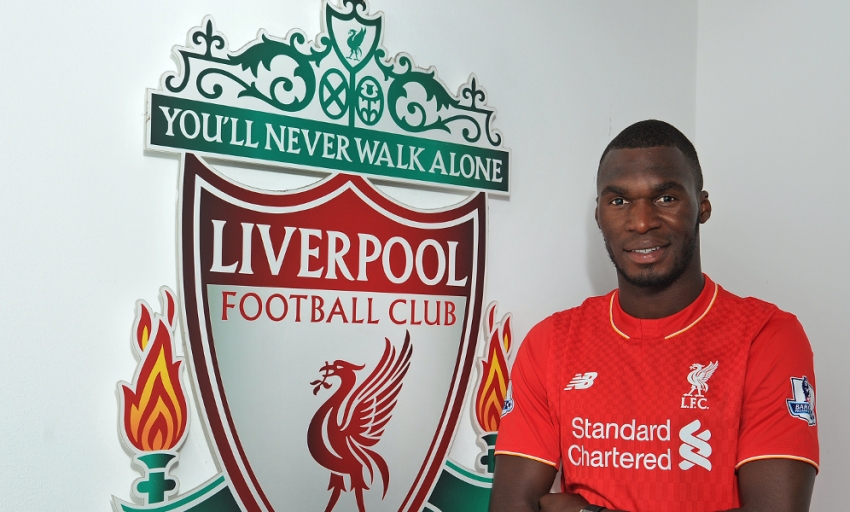 After completing the formalities of his move to Anfield, Christian Benteke sat down with Liverpoolfc.com to discuss the draw of the Reds, his emotions upon signing, and his aims for the future - read on for a full Q and A.

Christian, welcome to Liverpool Football Club. How does it feel to have signed?

I'm very happy to be here and I would like to thank the owners, Ian [Ayre] and of course the manager for their massive effort to bring me here.

We're speaking literally minutes after you put pen to paper, what would you say is your overwhelming emotion?

It's hard to show your emotion when you've just come from doing something [like this] but of course I am very happy.

Why was Liverpool the right club for you?

I think it was the right club for me because I had a good chat with the manager and I wanted to be part of his project.

You've scored several times at Anfield for Aston Villa in the last couple of years, what do you imagine it will be like running out in front of the home supporters in the red of Liverpool?

I think when I came here with Aston Villa [it was] a great feeling to play at Anfield. Now, to be in the home shirt is going to be an exciting feeling.

What do you know about Liverpool Football Club?

I know Liverpool is a big story. They've won [many] league titles and the Champions League five times and of course the UEFA Cup and a lot of trophies. I know it's a big club.

You're the seventh signing the club has made this summer, what is your take on the strength of the squad you're joining?

I think there are quality players, a lot of good players with big names of course. I'm happy to be part of this team and will [try] to help this team reach its goals.

How much are you looking forward to meeting up with your teammates in the final few weeks of pre-season?

I'm very excited. I want to meet them and work with them, of course.

You can also look forward to working with your Belgium international colleagues Simon Mignolet and Divock Origi - have you spoken to them in recent days about life at Liverpool?

Not yet but I will just wait to see them and hopefully they are going to help me!

Since you came to England you've developed into one of the Barclays Premier League's top forwards but how would you describe yourself as a striker?

You're still only 24, do you feel you can develop and become an even better player at Liverpool?

Yeah of course. I want to be the best and I want to reach the best of myself.

What do you hope to actually achieve here at this football club?

What would you say motivates you as a footballer?

It's about winning trophies. It's about doing something in [my] career I can maybe explain to my son or my kids what I did.

As you sit here now having just signed for this club what are you looking forward to most?

There's a lot of feelings. I want first to meet my new teammates and I want to work with the manager and his staff.

Finally, what would you say was your message to supporters in Liverpool and all over the world who'll be wishing you every success in a red shirt?

I'm very happy to be part of the Liverpool family now and I will do everything to make them happy and work hard for them and my teammates.