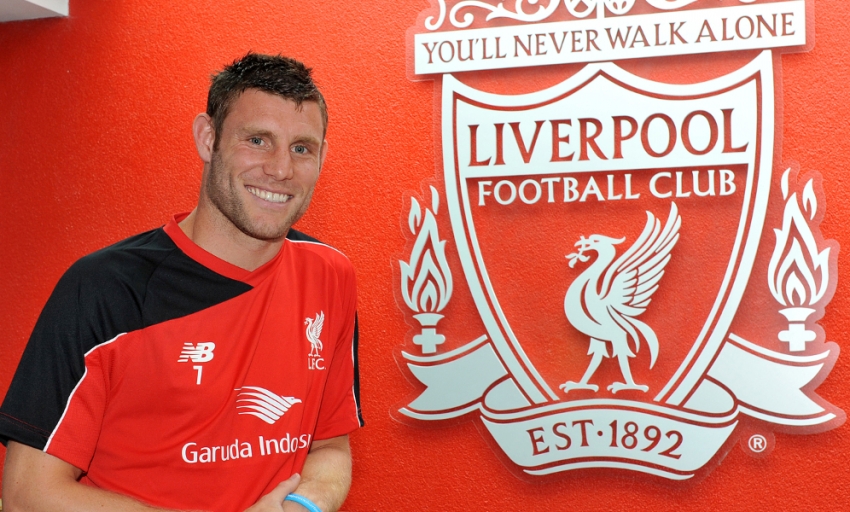 James Milner has explained why the challenge of helping Liverpool compete for honours and playing regularly in front of the Kop was an opportunity he just could not turn down.

The England midfielder joined the Reds from Manchester City earlier this summer and spent his first day at Melwood on Monday as the squad began pre-season training.

On a busy first day in his new surroundings, Milner sat down with Liverpoolfc.com to outline the qualities he is hoping to add to Brendan Rodgers' team, what he's been told is expected of him at Anfield and how he is aiming to try to deliver silverware to supporters.

LFCTV GO members can watch the interview in full by clicking play on the embedded video below. Need a subscription? Sign up now.

Alternatively, scroll down for a full transcript of our exclusive chat with Milner.

James, welcome to Liverpool Football Club. How does it feel to walk through the doors and put the training kit on for the first time?

It's an amazing feeling. It's always a big thing, obviously, changing club. To sign for a club as big as Liverpool with the history they've got and the place it is - I'm just ready to get started I suppose. It's great to be here; over the summer you're thinking about it and wanting to get going once the decision has been made so it's great to come here.

Were there any nerves? Excitement?

Yeah, a bit of both. It's always intimidating walking into a new dressing room. I'm lucky as I know quite a few of the boys, so that helps as well. It's a new challenge for myself personally. I know what a good side Liverpool are and what good players there are here. There's a great foundation and I've heard a lot of good things about the people who work at the club who maybe we don't know. I obviously know about the players and coaches, but there are people behind the scenes as well and everyone has told me what a great club it is to play for with the people here. I am just looking forward to getting going.

What attracted you to this move? You were at Manchester City, were very successful and won lots of trophies. Why you did you decide this was the next challenge for you?

City are a great club and I had five great years there and enjoyed every minute. The fans were brilliant with me the whole time there, and that made the decision difficult. I was lucky enough to win trophies and be part of a good squad there, but speaking to the club about what their plans were and where they saw me over the next few years at the club, and then speaking to the manager here and his plans going forward and for myself, I just thought it was the right thing for me to hopefully go and get more game time and be part of something special.

I've been very fortunate to play for some massive clubs during my career so far and this is another one. It's a great challenge for me. I want to play football and play more centrally if I can - and that's where the manager said he sees me playing. That's a big thing for me coming to the later stages of my career - I'm not going to say the end of my career because I still feel I have plenty of football left in me! - I want to play as much football as I can. When I'm sat at 45 and retired, I want to look back and see what I've done and that I've played games, rather than having come to the end of my career and tailed off.

Liverpool is a great fit for me as a club. It's a huge club and there is a lot of pressure every time you step out onto that field. I've played in front of the Anfield crowd and it'll be nice to be on the other side of the fans now! The atmosphere they create is fantastic and probably some of the best atmospheres I've played in in England, so to have them supporting me is definitely going to be an amazing feeling.

You mentioned the manager there - was he a big part in that decision to come here?

He was a massive part, to be honest. The club doesn't need a lot of selling about what a great club it is, with all the history, the support and the squad they have. But speaking to the manager and what his plans were for me, things I've heard about him from other players - I was speaking to Stevie at England and people like that - and what he said to me made me want to come and play for him straight away.

You mentioned before about the ambition to go on and play lots of games and play centrally as well. Is there another part of your role here that the manager has spoken to you about, with the likes of Steven Gerrard moving on?

If you look at the squad here, there is a great mix of home-grown British players and foreign lads as well, but there's also quite a lot of younger players in there. I've been lucky enough to be playing for maybe 13 years or something now - it makes me feel a bit older! - but hopefully I can bring that experience to the squad and help those younger guys along. As I said, I've been fortunate enough to win trophies. Obviously Liverpool came so close a couple of years ago to winning the league and being up against them in that title run-in, it felt like the whole world wanted them to win the league. That shows the love for the club and the global respect for the team. Hopefully, my experience can help us get into that position again. And if I can use the experience of winning trophies to help the younger guys, hopefully it can help get us over the line and win some silverware.

You said before you know a lot of the players inside the dressing room. Have they spoken to you about what you can expect now you are a Liverpool player?

Yeah, I was speaking to the lads over the summer when we were away on international duty and I saw Kolo this morning, who I obviously know from Manchester City. He said I will absolutely love the place and that it is a great club, which everyone has told me. I've heard nothing but good things. I haven't spent too much time with the lads but pre-season is a good time to get to know the rest of the players I don't know. We'll spend a lot of time together and I'm sure they'll all be sick of me within a few weeks!

What about the season as a whole, then? You've set yourself challenges all the way through your career, but what about this campaign? What challenges have you put in place for yourself this time?

I think at first you just want to get in, get your feet under the table and show your best form straight away. It's never easy moving clubs, for players coming in from different countries but also within England. It's never easy, it's such a big change moving any workplace - I am sure everyone can relate to that - and in football it's exactly the same. I'd like to come in, show my best form straight away and continue how I finished off last season when I felt I was in pretty good form. As a team, we want to win trophies - that's what this club needs to do. The pressure is there, the expectation is there and everything is there for us. We've got a great manager and great staff, and with players there is a lot of quality within the squad and a lot of new signings coming in as well. Everything is there for us to go and do that [win trophies] and being around the place this morning, I can see everybody is raring to go, wanting to be together and ready to push forward.

Can you see that steely determination already to put right the disappointments from last season?

I've only been here today, but you can see it straight away. Within the meeting this morning, there was that determination and a sense of learning from the last couple of years. The manager has been here for three years, the players have been there with him too, and each season has been different. The main thing is you learn from every season whether you win or lose. You normally learn more from seasons and games that don't go too well. There is a hunger there, I can feel that, and that's why I also wanted to come to the club. There is that pressure there, but there is a hunger and desire there to do well and win trophies because that's what is expected wearing this shirt.

What do you hope to achieve during your time at Liverpool?

I'd like a trophy cabinet full of medals, to be honest. That's the reason why I've come here. I want to enjoy my football, play well and show people what I can do. I want to do what I've tried to do throughout my career and be the best player I can be, and try to improve each day. Hopefully I can help younger players do that, but I can also learn a lot from them. That's a massive part of it as you never stop learning. I've been lucky to play with great players throughout my career and there are a lot of great players at this club as well, so I'll learn as much as I can and hopefully help one or two players along the way and help this club be successful.

You've been allocated the No.7 jersey here at Liverpool. Was the thinking behind it that it's just your number, or did you have to think long and hard about taking it?

I was seven at Man City, but at a club like Liverpool you can wear any number on the squad and it'll have been filled with amazing players who have worn it before. I know seven is a special number for this football club and hopefully I can be a special player for this club. But as I said, with the success this club has had over its history, you could pick any single number from the squad list and you'll be wearing a special shirt. Hopefully I can do the shirt proud and win plenty of matches for this football club.

Just finally, do you have a message for the Liverpool fans reading this?

Not really other than to just keep doing what they normally do. Watching from afar and from playing against them, I know what a great atmosphere they create. I always enjoy playing in those atmospheres where the crowd is up against you, but to have that same crowd with me as a player will be amazing. I am sure they will give us the support, like they always have, and the special atmospheres I've played in before really do make a difference - and hopefully it can drive us on to success.