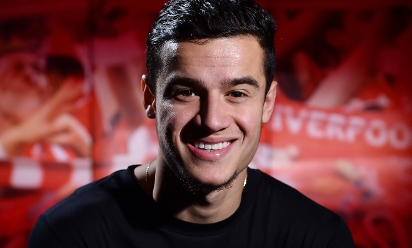 Photos: Behind the scenes on kit shoot

Liverpool attacker Philippe Coutinho has been nominated for the prestigious PFA Players' Player of the Year award in recognition of his excellent form this season.

The Brazilian has been a stand-out performer for the Reds throughout 2014-15, contributing six goals in 45 appearances so far for Brendan Rodgers' team.

His displays have now been acknowledged with being shortlisted for an individual accolade that was scooped by former Anfield forward Luis Suarez 12 months ago.

Joining Coutinho in contention for the prize - which will be presented on Sunday April 26 - are Diego Costa, David De Gea, Eden Hazard, Harry Kane and Alexis Sanchez.

The Liverpool No.10 has also been nominated for the PFA Young Player of the Year award, alongside club colleague Raheem Sterling on the six-man list.

De Gea, Hazard and Kane get the nod in that bracket too, with Chelsea goalkeeper Thibaut Courtois rounding out the contenders for the honour.