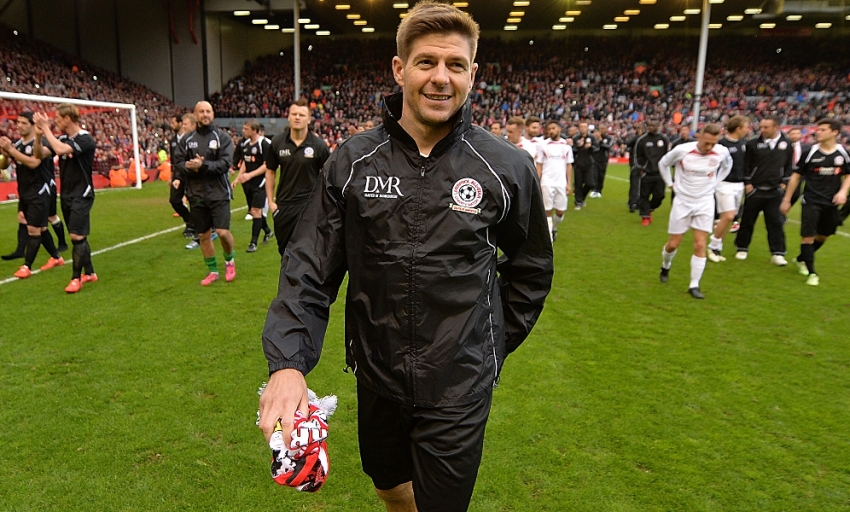 Steven Gerrard insists he enjoyed every moment of the All-Star charity match on Sunday afternoon as Kopites witnessed a special spectacle unfold on the hallowed Anfield turf.

The captain was on the scoresheet twice as his side, which included the likes of Luis Suarez, Fernando Torres and Xabi Alonso, fought back from two goals down to draw 2-2 with a team skippered by Jamie Carragher.

Mario Balotelli and Didier Drogba both scored in front of the Kop in the first half of the event, organised by the Liverpool FC Foundation, but Gerrard converted two penalties to ensure the game finished all square.

However, the day was less about the result and more about welcoming back former heroes, as well as supporting a game that will now massively boost vital work being carried out by charities in the local community.

"It's been absolutely brilliant," Gerrard told Liverpoolfc.com from the Anfield turf following the final whistle. "I think, first and foremost, the charities involved will have done extremely well [thanks to] the full house.

"But that's no surprise. We know our supporters - when it's for a good cause, they always come and support. It's been terrific. It's just been absolutely magical and I've loved every minute of it.

"The game was [played at] a good pace. Everyone enjoyed it. There were no injuries. The hairs on my neck were standing up all the way through the game.

"Just to play with some ex-players and to be at Anfield one more time with them was a fantastic occasion. Today has given them the chance to sample the atmosphere one more time and to say their goodbyes properly, because sometimes you don't get a chance.

"Today, first and foremost, was all about charity, but after that, it was a chance for some big, big players, who have contributed really well throughout their careers here, to come and say 'bye' to these terrific fans."

The Kop worked through their repertoire of iconic chants as former heroes took to the field to join rivals like John Terry and Didier Drogba as well as current stars of the first team and Academy players.

Torres and Suarez began the game on the substitutes' bench; however, they jogged out together to rapturous applause at the start of the second half.

With the Reds trailing 2-1, Suarez was fouled inside the penalty area - and as Gerrard went to retrieve the ball, he extended the offer to take the spot-kick to both of his former teammates.

"They didn't want it," laughed the skipper. "I asked them [Torres and Suarez] if they wanted to have a go, but they didn't want to take it. I don't think they wanted the memory of their last time [at Anfield] and missing a penalty in front of the Kop.

"Saying that, it's understandable, but just being there with them today and the options that they give you on the ball - their movement is sensational. The only regret that I have got is that I didn't play with them together."

While Torres and Suarez both started the game on the bench, Gerrard was able to feature alongside Xabi Alonso during the first half as Thierry Henry led the line in front of the pair.

Henry, who scored 228 goals in 377 appearances for Arsenal, and thrived during many a duel with Gerrard down the years, displayed flashes of brilliance throughout the clash.

"He might not have the pace [anymore], but you see he has the class and the movement," said Gerrard, who has forged a strong friendship with the Frenchman.

"These players didn't have to come today. They could have easily turned it down. People have gone out of their way today to be here.

"Some people have got two or three flights - Ashley Williams, for example, played last night [for Wales against Israel]. Luis [Suarez], playing in the El Clasico last week was desperate to come and play 45 minutes."

As well as helping Alder Hey Children's Hospital with their continued work towards a stunning new Hospital in the Park, the match will help fund the Liverpool FC Foundation's community programmes and lend support to four other charities in the local area.

"We've all got our personal experiences over the years of visiting these places like Claire House, like Alder Hey, and many more," said Gerrard. "When you're in a position like ourselves [as footballers], the least you can do is turn out and show some support.

"Every single player that got asked to come here, turned up. Whether it took them an hour or they had to take two flights, which shows what footballers do for the community."