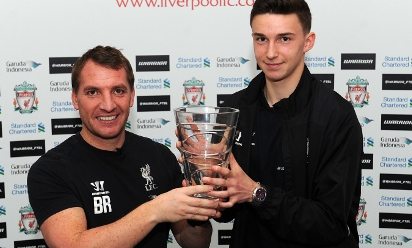 Liverpool Academy youngster Conor Masterson has been named U16 International Player of the Year by the Football Association of Ireland.

The defender from Dublin joined the Reds on a full-time basis in September 2014 after signing from Lucan United.

First-team manager Brendan Rodgers presented Masterson with the award at Melwood and offered his personal congratulations on the achievement.

The centre-back was unable to attend the ceremony in Ireland on Sunday, but commented: "It's such a great honour to receive this award and it was fantastic for it to be presented to me by the manager.

"I would like to thank the FAI for recognising me and helping me to develop my future in football and I would also like to thank Lucan United, who gave me great support and a great grounding from which to start my career."

Masterson has adapted to life at Liverpool quickly and his focus is now on further progress under the guidance of the Academy staff in Kirkby.

He added: "When I first visited the club, everyone was so friendly and welcoming towards me.

"I have really settled in at the Academy and I have made lots of new friends here. It's a great club and that's the reason I chose to come here.

"I've got lots to be focusing on in the next few months, including the Euro qualifiers and an upcoming tournament in April, so I'm concentrating really hard on my training."

Academy director Alex Inglethorpe said: "This is a great achievement for Conor and one which is well deserved. He is a very talented and committed player and we are delighted to have him at our Academy."