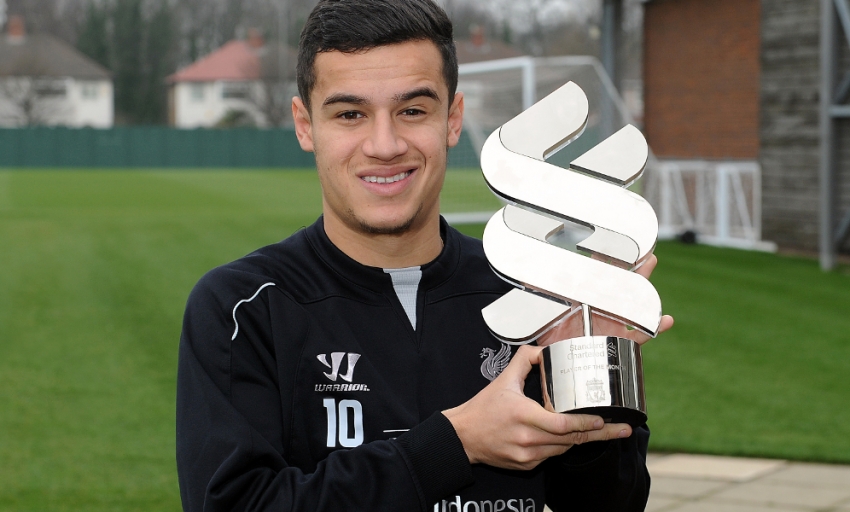 Philippe Coutinho's recent dominance of the Standard Chartered Player of the Month award has continued after the Liverpool No.10 collected the accolade for February.

Fans nominated the Brazilian playmaker as their star man in December and January and maintained their appreciation by voting him for the honour for a third successive time.

It was no less than the 22-year-old deserved.

Coutinho unleashed a spectacular strike from distance in the opening match of the month to complete a Reds turnaround in the FA Cup at Bolton Wanderers.

He started six of the team's seven games in February, maintaining a relentless level of creative performance to help Liverpool strengthen their season ambitions.

Perhaps his personal highlight was a goal of unforgettable technique and audacity, a powerful blast from 25 yards against Southampton that kissed the crossbar as it sailed in.

More than 8,000 votes were cast by supporters in our online poll for the Standard Chartered-sponsored prize - and Coutinho clocked up a landslide 73 per cent.

Upon receiving the award at Melwood, Coutinho told Liverpoolfc.com: "Winning this trophy makes me very happy as it's a cool award, voted for by the fans.

"It definitely helps to give my confidence a boost - I'm pleased to get this recognition from them.

"Nevertheless, I think the most important thing is the fact that Liverpool are playing well as a team. It's fundamental for us as a squad to keep winning games."

Asked if February was his finest month of performances since arriving at Anfield two years ago, he added: "It might have been.

"Everyone has been playing well and we've been able to keep the momentum going.

"These have been happy months for us here and I expect to continue working hard and improving, hoping that it'll help us to win more games."